With a history dating back to 1961 and its headquarters in the Swiss metropolis of Biel, Maurice Lacroix is already known as an international player. The Masterpiece Collection has been its very own flagship series for about 30 years.  More 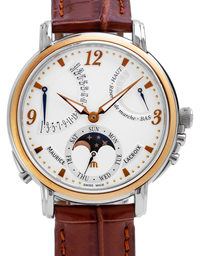 Haute Horlogerie at an entry-level price

Features of the Masterpiece series

The dials of the Maurice Lacroix Masterpiece watches are particularly noteworthy. Intuitively structured, clearly legible and superbly crafted, they represent the heart of the Masterpiece series. They give the cases made of classical or rose gold-plated stainless steel a distinctive accent.

A clear development can be seen here. Whereas earlier models such as Ref. MP6347-SS001-92X still had a certain centrality, with the date and moon phase at the center of the watch, the trend in newer Masterpiece models such as Ref. MP7078-SS001-120 is towards decentralization. The totalizers nestle against the edges, giving the dial more room to breathe, making it look more tidy overall. The totalizers overlap and extend partially over the entire dial, but this does not impair its legibility. In terms of color, Maurice Lacroix offers its wearers a wide choice of dials, allowing them to choose between silver, contrasting black and white, sporty blue accents or skeletonization. The watches are supplied with leather straps as standard, with black and brown crocodile leather being particularly eye-catching.

The Masterpiece series is also the flagship collection for the calibers based on ETA movements, which are developed by Maurice Lacroix itself. Today, the series features 14 different calibers developed specifically for the Masterpiece collection, including classic and skeleton chronograph movements (ML 106-2, ML 106-7, ML 134), a double-reversing movement (ML 151) and a mysterious seconds movement (ML 215).

Other Interesting Series from Maurice Lacroix

From Maurice Lacroix Les Mécaniques to the Masterpiece Collection

When Maurice Lacroix celebrated his independence in 1980, the new freedom also presented a challenge. Since anything was possible, the question was asked where exactly to go, and the entry-level segment was served with high-quality automatic watches as well as gold lovers with quartz variations. The breakthrough came in 1990, when the high-end line "Les Mécaniques" was launched, which would be renamed to "Masterpieces" in 1992.

This reorientation went hand in hand with the change to the production of in-house calibers, which were developed partially based on the ETA movements. In 1989, the movement manufacturer Queloz SA was bought and in 2006, they were able to unveil his first specially developed movement, the ML 106. Since then, Maurice Lacroix has released numerous movements, including his first self-winding movement in 2011. With the production of his own movements, Maurice Lacroix also switched to larger cases and a more industrial look.