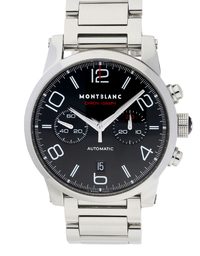 With the TimeWalker, Montblanc established itself within the watchmaking industry. Launched in 1997, it is one of the first ever series released by Montblanc and demonstrates the brand's increasingly innovative spirit. Over the course of 20 years, it developed from a dress watch to a sporty chronograph with flair that it channels from the slopes.


The visual evolution of the Montblanc TimeWalker

The Montblanc TimeWalker Collection is inspired by the history of the watch brand Minerva and conveys the spirit and passion of motorsport of days gone by. The TimeWalker models embody highest precision and are the epitome of both technical and aesthetic excellence.

As the TimeWalker evolved from a dress watch into a chronograph, the design was also adapted. At first the company still focused on using the classic Tri-Compax design, which was well-known at one time thanks to Universal Genève. Although this doesn't nominally refer to the design of the chronograph but rather to the number of functions, it is still synonymous with the V-shaped arrangement of the three totalisers, which is considered to be harmonious and well-balanced. In recent years, the design has been changed further to make the overall appearance of the watches sportier. The dial with its wide, striking Arabic numerals has puzzled many people. The hours totaliser is still at the 6 o’clock position, but the minutes totaliser has been moved to the 12 o’clock position. In addition, the seconds totaliser at the 9 o'clock position was significantly reduced in size. The fluted bezel, crown and pushers are also inspired by motorsports. Today, the TimeWalker series includes modern chronographs and sporty three-hand watches that feature a perfect combination of technical finesse and sophisticated aesthetics.


How much does a Montblanc TimeWalker watch cost?


The history of the Montblanc TimeWalker

From dress watch to sporty chronograph


Launched in 1997, the TimeWalker has since matured into Montblanc's most extensive series. Starting out as a dress watch, the model has slowly but surely developed in an increasingly sporty direction without forgetting about its original design language all together. 2008 was a decisive year for Montblanc when, after ten years of hard work, the company presented its first two in-house calibres. The simultaneous launch of two chronograph movements (MB R100 and MB R200) legitimised Montblanc's desire to mature into a renowned watch brand.