When everyone had their eyes on the Moonwatch in 1969, Omega launched one of its most adventurous series: the Flightmaster proves that avant-garde design and intuitive functionality can go together.  More 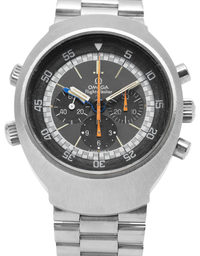 In the 1960s, Omega had their finger on the pulse with its functional watches and its Master Series became bestsellers to the point that they even journeyed to the moon, as was the case of the Speedmaster in 1969. Unfortunately, the Omega Flightmaster has become something of a forgotten model today – perhaps unjustly, as you will soon discover. In 1969, when the whole world was fixated on the mission to the moon, Omega quietly and secretly launched one of its most extraordinary watches: the Flightmaster. Intended as a variation of the Speedmaster, the Flightmaster was marketed specifically as a pilot’s watch. As a tribute to aviators, the outline of a Douglas DC-8 jet is engraved on the back of the case.

If you have already chosen a second-hand model from the Omega Flightmaster collection, all you have to do is add the model you want to buy to your shopping basket and complete the order by processing your payment. At the checkout you have the option to either pay directly via PayPal, credit card or instant bank transfer or pay on finance via one of our partner companies. Once this process is complete, your Omega Flightmaster will be with you in no time.


The Omega Flightmaster – not just any old chronograph

With its three crowns, two pushers and no fewer than seven hands, the Omega Flightmaster can seem a little overwhelming at first glance. The dimensions of the case also command a certain respect: the Flightmaster is 52 mm long, 46 mm wide, 15 mm thick and still only weighs 139 grams. The case is made of Swedish stainless steel, with the upper part pressed and shaped 16 times during production until it takes on the elliptical curves that are so typical of the series. But the design of the Flightmaster is even more well thought out than you might think and with its hidden lugs it looks much smaller on the wrist than it is on paper.

The same thing goes for the dial. Once you get used to the layout, it is uncluttered, easy to read and, thanks to the colour coding, intuitive to use. The crowns on the left side are customised with blue and black markings. The blue crown controls the second hour hand as the Flightmaster has a 12-hour GMT function with a separate hand. This was Omega's answer to the early Rolex GMT-Master, with which wearers could only read a second time zone using the bezel. The black crown moves the inner bezel which is protected by extremely durable mineral glass. The yellow and orange pushers on the right-hand side control the chronograph.

Inside the Flightmaster the manual winding Calibre 910 beats away. This is essentially the Calibre 861 of the Moonwatch, but it was developed slightly to provide a second time zone function. The history of Calibre 861 is rather interesting. Rolex worked together with Lemania from 1943 on Calibre 321, a 27 mm chronograph movement, which was later replaced by Calibre 861 in 1968. This also brought about numerous new features. The operation of the chronograph was simplified, and the frequency of the balance spring was increased from 18,000 to 21,600 vibrations per hour. Lastly, the hairspring of the balance was flattened. The Calibre 861 became one of Omega's most popular movements and demonstrated endurance and durability – even in space .


How much does a pre-owned Omega Flightmaster cost?


The history of the Omega Flightmaster

The first Flightmaster with Calibre 910 was produced as two different versions. Certain models have orange ones, but most have yellow cadmium-plated hands. A limited-edition model that is in great demand today is the Omega Flightmaster (Ref. BA 345.0801). The bracelet and case are made of yellow gold, which makes this model one of the heaviest timepieces in Omega's catalogue, weighing in at just under 250 grams. The model was limited to 200 pieces, although some collectors estimate the number in circulation to be much lower and only believe there are 40 watches around nowadays. One of these much sought after watches was given to King Hussein of Jordan.

In 1971 Omega made some changes to the Flightmaster. Many wearers complained that they couldn’t see whether the Flightmaster Ref. 145.013 was working precisely due to the missing seconds counter Later models therefore used the calibre 911, which adds a running seconds counter at the 9 o'clock position. This also resulted in two changes to the model reference number. Ref. 145.026 had orange hands and a flat glass face, while Ref.145.036 adopted the cadmium-plated hands and also added an O-ring to protect the watch glass in the event of sudden decompression. However, due to the specific target group, the response was rather subdued and so the Flightmaster was discontinued in the mid-1970s.

Successor of the Flightmaster series


Since the discontinuation of the Flightmaster series in the mid-1970s, there have been two attempts to put the series back into the limelight. Its spiritual successor is the Speedmaster Professional X-33, which is equipped with a quartz movement. In 2012, Omega then launched another series of pilot watches that were based on the same design as the Flightmaster but were released under the name Spacemaster Z-33.