Discover more about the Omega Railmaster, one of the models steeped in the most history that resists magnetic fields of up to 1,000 Gauss. The Railmaster is a watch for collectors and anybody who wants to become a collector.  More 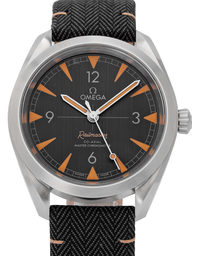 The Omega Railmaster didn’t quite have the same career as its sister model, the Seamaster, for example. Its classic design and preference of being understated means that it hasn’t quite made it to the big screen or even on to the wrist of a superspy. Those who wear the Railmaster aren’t looking to make a statement but instead wear it mainly because of its historical and undervalued past. This model is the underdog in Omega's master trilogy, which only makes fans yearn for the watch even more.

In the Watchmaster range, there are several models of the Omega Railmaster to choose from – new, vintage and certified pre-owned. As soon as you have found your dream model, there are a wide range of payment options available. Would you rather pay in manageable instalments? Then you can choose to pay for your Omega Railmaster on finance. Our customer service team is always available to advise you and are more than happy to answer your questions.


From crown to dial: the value of the Railmaster lies in the detail

As with many popular series, the value of Omega Railmaster watches is in the detail. The anti-magnetic case has been kept across most models, with only the new edition of the Railmaster from 2003 forgoing this feature. The dial, with its four Roman numerals and the characteristic triangles, went through various design cycles in the special edition models before going back to its roots for its 60th anniversary. Another critical detail is the crown with the small symbol that is similar to the Mercedes star within the Omega logo. Like the original Seamaster, the Railmaster doesn’t have a screw-in crown. As an alternative, as water pressure increases, the crown applies more and more pressure against the seal. The 2003 model does, however, have a crown that can be screwed inwards.


Models and prices of the Omega Railmaster

Like its sister models, the Seamaster and Speedmaster, the Railmaster is part of Omega's Master trilogy that set new standards back in 1957. While the Seamaster set new standards for diving watches and the Speedmaster established itself on the racetracks of the world, the Omega Railmaster (Ref. CK2914) was designed specifically for electrical engineers and scientists. Technically speaking, the Railmaster is in no way inferior to the other two series. The remarkable detail is the Faraday cage, which shields this model against magnetic fields of up to 1,000 Gauss. A Faraday cage is formed by a coating on all sides, which is made of an electrical conductor and thus has a shielding effect. To craft this cage, Omega used a soft iron plate on the back of the case and made the dial thicker – taking the industry standard of 0.4 mm to 1 mm.

So, what’s the need for all this? Magnetic fields can be dangerous for watches. However, the actual damage they cause is usually exaggerated somewhat. Critical damage generally only occurs when the magnetic fields affect one of the most fragile and important parts of a watch: the balance spring. This damage to the spring can change the oscillation frequency of a watch, which leads to a loss of accuracy. This often causes significant losses in the value, especially for luxury watches.

When the Omega Railmaster hit the market, other companies had already tried to solve the magnetic field problem. Rolex launched the Milgauss (Ref. 6541) in 1954, while IWC introduced the Ingenieur (Ref. 666). Omega developed its first prototypes in 1952 when the company produced an anti-magnetic watch for the British Royal Air Force and built on this progress with a watch for the Canadian market afterwards (Ref. 2777-2). These models are considered the official predecessors of the Railmaster.


Limited editions of the Omega Railmaster

None of Omega's Master series have as many interesting limited-edition models as the Railmaster. Omega trialled several models aimed at very specific professional groups, each of which was produced for only a short period of time. Because as most collectors know, a watch with an interesting history and one that was released as a limited-edition piece is usually a very wise investment.