The famous diving watch Omega Seamaster is considered an icon among the water sport watches. The watch of the movie hero James Bond convinces with a classic dive watch design and a multitude of exciting features. The design as a chronograph gives the Seamaster a particularly sporty look.  More 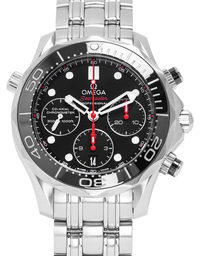 
Find numerous certified pre-owned luxury watches, including models of the Omega Seamaster Diver 300M Chronograph, at comparably low prices in our online shop. We have many popular Omega watches in stock so that you are sure to find an affordable model that will suit your needs perfectly. The payment options are variable: PayPal, credit card or flexible financing in instalments – it's completely up to you. You can find out about other payment options either on our website or by contacting our customer service.


Discover more about the collection

The Seamaster 300M has been on the market since 1957 and has since been reworked for different collections over and over again. So that today it is available in various designs. What they all have in common, is the water resistance of up to 30 bar, the stainless steel housing and their sporty, diver watch-typical design. It is available in different colours and with different bracelets. The Omega Seamaster 300M Chronograph remains faithful to the iconic design of the Omega diver watches and is also equipped with a handy chronograph function.

In the current collection, we find the popular chronograph with blue or black dial and case sizes of 41.5 and for the Seamaster 300M GMT Chronograph 44 mm. From older collections certified, used luxury watches in smaller sizes are available. The current models are completely made of stainless steel and have a white hour and minute hands as well as a red second hand, or a yellow on the Seamaster 300M GMT Chronograph. They carry a totalizer with a 30-minute display at 3 o'clock and one with a 12-hour display at 6 o'clock, which are both equipped with red and yellow hands. The new models also all come with Co-Axial calibre 3330, so the watch is particularly low in maintenance due to the reduced friction between the anchor wheels. So the Omega Seamaster 300M Chronograph is not only a sporty and elegant accessory, but also a highly functional diver's watch!


Models and prices of the Omega Seamaster 300M chronograph

The history of Omega diver's watches

Omega stands for tradition and quality: In addition to Rolex, it is considered the leading Swiss luxury watch brand. The companies myth is mainly based on the close connection to space travel, but also in the field of diving watches, it can assert itself with success since the 1930s. In 1932, the Omega Marine launched as a watertight model. Omega just started with the Seamaster family. The first watch in this series is still called Omega Seamaster, which came on the market in 1948. Compared to other diver's watches, it was considered rather slim and noble. The bolted bottom and the special O-ring seal guaranteed waterproofness.

Quickly followed the still famous Seamaster 300. It was considered a revolution of the Omega divers watches: It is equipped with a rotating bezel, double crown seal and special glass, it mastered easily the highest testable pressure of 20 bar at that time. Since then, Omega has developed a multitude of interesting Seamaster designs that remained faithful to the design of the classic and its commitment to state-of-the-art functionality. Today, especially the Co-Axial models, but also those with GMT and chronograph function are known.

To whom would the sporty, high-quality Omega Seamaster fit better than the world-famous secret agent James Bond? With "Goldeneye" in 1995, the Seamaster celebrated, thanks to the well-known costume designer Lindy Hemming, who then opted for the model with blue dial, her movie debut. Pierce Brosnan wore the model 2541.80.00.

Their next appearance was 2006 with the Seamaster in "Casino Royale" – and with two models. The Seamaster Diver 300M Co-Axial (Ref. 2220.80.00) and the Planet Ocean 600 M Co-Axial (Ref. 2900.50.91) shined on Daniel Craig's wrist. The Omega Bond era continued in 2008 in "A Quantum of Solace" with the Seamaster Planet Ocean 600M Omega Co-Axial with black dial and black bezel. Also in "Skyfall" from 2012, the action hero fights with two different Omega Seamaster models on the wrists: the Ocean 600 M and the Aqua Terra, both of which are equipped with an OMEGA Co-Axial calibre.

Finally, the Omega Seamaster reappears in the most recent Bond movie "Spectre" from 2015. In this case, the watch and film are even related by name: Daniel Craig wears the Omega Seamaster 300 Spectre Limited Edition with a black and grey Nato strap. The design of this watch is a tribute to the first Seamaster 300M from the year 1957. But also the Omega Aqua Terra 150M with a blue dial can be seen here on 007.