Not only since its debut in the James Bond films, the Omega Seamaster Planet Ocean Big Size is a classic among the divers watches. With a case diameter of 45.5 mm, it catches eyes and convinces at the same time with great functionality.  More 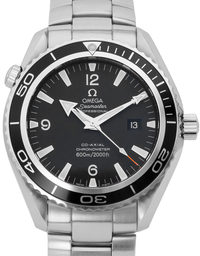 
The Watchmaster online shop offers a large selection of used, certified luxury watches, including models of the Seamaster Planet Ocean Big Size at comparably low prices. If you've already found your favourite model and want to buy a Planet Ocean Big Size, you have several options. Either choose to buy it via credit card, PayPal or plan your investment in the long term by financing it. A payment in small instalments over a time period of your choice can be adapted to your own needs. Further information can be found on our website. Our customer service team is also happy to advise you on models and ways to buy and finance your Planet Ocean Big Size.


Features of the collection

In addition to optical features such as different case sizes (as described above: 38mm, 42mm and 45.5mm), the key differences within the series are their operation. The Omega Seamaster Planet Ocean Big Size watches are exclusively available with a case diameter of 45.5 mm. The diver's watch is available with or without a chronograph complication and is equipped with different calibres depending on the version. The wristwatch from 2005 without chronograph function is equipped with an Omega calibre 2500, which has a co-axial escapement. Their successors in 2011 then received the calibre 8500, watches after 2016 the legendary Co-Axial calibre of Omega. All models of Seamaster Planet Ocean have luminescent hands and indices on the dial for better readability and are equipped with a unidirectional rotating bezel. At the 10 o'clock position is the helium valve, which guarantees that helium atoms, which are trapped inside the case, can escape again on resurfacing. This ensures that the glass does not break or pops out of the case.

Diver’s watches made by Omega

Even though the Speedmaster found its way into the history books as the first watch on the moon, Omega's diving watches are in no way inferior to the "Speedy". Behind the generic term Seamaster, a variety of very different watches are hiding. It looks back on a long history of development. The first Seamaster was launched in 1948. This makes them the oldest Omega series still sold today and is now available in many different variations. At the same time as the 1948 Olympic Games in London, Omega became 100 years old. To celebrate its 20th anniversary, the company released the Omega Seamaster, a water-resistant watch with a screwed-in bottom and a special O-ring seal. It had a rather dress-watch character thanks to its slim case and elegant appearance.

Inspired by their waterproofness, the company developed a triumvirate of tool watches designed for professional use in 1957: the Omega Railmaster, Speedmaster and Seamaster 300. The last two are still key components of the collection today. The Seamaster 300 was, contrary to what its name suggests, initially "only" waterproof up to 200 m diving depth. Later produced pieces actually reached 300 metres. One of its most important components was the Naiad crown, which was specially developed at the time and attached to a special spring which ensured that the crown of the Seamaster closed itself more and more tightly as the diver dived deeper as the pressure increased.

Today, the Aqua Terra belongs to the Seamaster family. The Seamaster Planet Ocean was introduced in 2005. It is able to withstand pressures of up to 60 bar. An integrated helium valve prevents the glass of the watch from shattering when the diver emerged with the watch on the wrist. It was produced in three different sizes: 38 mm, 42 mm and 45.5 mm diameter. The latter version is nicknamed "Big Size" because of its slightly oversized dimensions. The diving watches are available with different coloured dials and different bracelet variations. In 2011, the series was redesigned: In addition to the transparent case back and the ceramic bezel, the interior of Seamaster Planet Ocean was redesigned. The 8500 calibre replaced the previous 2500. The co-axial escapement was significantly increased by 13 %. The last, and perhaps most revolutionary, change took place in 2016, when the co-axial calibre was introduced alongside some minor changes in optics.

* Terms and conditions apply
All prices include VAT. If differential taxation in accordance with §25a UStG is applicable the VAT will not be reported separately.
Watchmaster ICP GmbH | Charlottenstraße 60 | 10117 Berlin | Germany
© Watchmaster ICP GmbH
# 9887504f9