If you are a fan of tonneau and cushion watch shapes, you should check out the Patek Philippe Gondolo. This series tastefully combines art deco style with the high art of watchmaking.  More 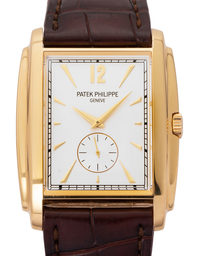 
The Gondolo is one of Patek Philippe's last secrets: launched in 1993, the origin of the Gondolo series dates back to the beginning of the 20th century and has an interesting story to tell about the name. The rectangular case is reminiscent of the simple beauty of Art Deco and later models are fitted with calibres that are adapted to fit the shape of the watch.


The Gondolo strives for perfect form

Elements of Art Deco, an art movement that favours simple geometric forms and repetitive patterns and decorations, are evident in the Patek Philippe Gondolo in the rectangular and cushion-shaped cases and its simple, elegant form. The case comes in either rose or white gold and is slightly domed, so it fits on the wrist perfectly. Most of the Gondolo models are very flat, which, in combination with the minimalist dials and warm colour combinations, makes them a versatile dress watch. Because of this, the Patek Philippe Gondolo is usually worn as a very classic style with a brown or black leather strap.

As is customary for Patek Philippe, there are compromises made with the calibres. While the company used to modify round calibres such as the 215 PS to fit into the tonneau-shaped case of the Gondolo, the calibre now fits perfectly into the case dimensions of the more recent Gondolo models. Newer Gondolo models also have a see-through back cover, whereas the earlier models have an opaque case back.


How much does a pre-owned Patek Philippe Gondolo cost?


Patek Philippe and the Gondolo Gangs

The Patek Philippe Gondolo is named after a series of famous pocket and wrist watches which the watch dealer “Gondolo & Labouriau” from Rio de Janeiro imported to Brazil for Patek Philippe between the end of the 19th and the beginning of the 20th century. In an effort to sell more than 30,000 Patek models, the Gondolo Gangs were founded in 1902. These exclusive gangs were limited to 180 members each, who all had to order a “Chronometro Gondolo” priced at 790 francs with 10 francs due each week – a sort of early subscription and pay-by-instalment plan. After 79 weeks the full amount for the Gondolo was paid off and the watch was finally delivered to its buyer. The coup: the watch dealer held weekly lotteries for a Gondolo watch among the club members, so with a little luck it could be purchased for as little as 10 francs.

These old Gondolo models still had 9-carat gold gears to prevent rusting in the Brazilian tropical climate and can still be admired today in the Patek Philippe Museum in Geneva. However, the new edition of the Gondolo series is relatively young. Since the 1990s, it has constantly been developed and also broken into the upper price category in the market. Between 2013 and 2018, for example, Patek Philippe launched the Gondolo Ref. 5,200. Available for the stately sum of € 44,800, it features a perfectly shaped calibre with an eight-day power reserve and immediate day-date changeover in a white gold case.


Other series from Patek Philippe