The Piaget Altiplano is without doubt one of the most iconic watch series in the world. Why not become a part of the success story by purchasing an Altiplano of your own?  More 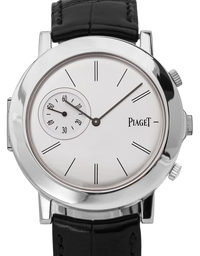 The Piaget company is one of the most prestigious manufacturers in the watchmaking industry. Since it was founded in 1874, high-precision movements have been the basis for the company's success. In the second half of the 20th century, Piaget then laid the foundations for its popularity among luxury watchmakers by establishing its own watch collections. If you choose to buy a Piaget Altiplano, you are opting for one of the most elegant and progressive watch series available.


Technical and visual details of the Altiplano

Naturally, the first thing you notice is the flat appearance of the Altiplano. Due to the ultra-thin profile, it’s to imagine that there is a consummate mechanical movement inside the Altiplano Manufacture calibres such as the Piaget 838P provide the Altiplano with a power reserve of up to 65 hours by running at a frequency of 21,600 vibrations per minute. All of this at a height of just 2.5 mm. In vintage versions of the Piaget Altiplano from the 1960s, the 12P automatic calibre even featured a movement measuring just 2.3 mm in height.

Piaget also showcases various complications in its Altiplano models, including totalisers for the small seconds, the elapsed minutes and hours when tracking time and the date function. The diameters of the cases range from 38 mm to 40 mm. The dial is framed by bezel which has been crafted as part of the main case body, thus creating a well-proportioned and overall appearance. The Altiplano models consist almost exclusively of precious metals such as yellow gold, white gold or rose gold and are sometimes decorated with diamonds or special dial motifs.


How much does a pre-owned Piaget Altiplano cost?

For over 60 years, Piaget has been producing ultra-thin watches and has continuously developed the timepieces in the Altiplano series. With this wide range of models on offer, anyone looking to invest in an Altiplano will find the right model for them – whether new, pre-owned or vintage.

The success story behind the Piaget Altiplano

The series has been called the Altiplano since 1998, so for a little over 20 years. However, the trend of making flat watches and even flatter manufacture calibres has been evident at Piaget since the end of the 1950s. In 1957, the manufacturer from La Côte-aux-Fées in the Jura mountains in Switzerland presented its hand-wound 9P movement at Baselworld. Only three years later, the world's thinnest automatic movement was released with the calibre 12P. With this development Piaget laid the foundations for the Altiplano as it’s known today. The creative diversity with which Piaget presents the individual Altiplano models is worthy of a special mention. The range extends from elegant dress watches to experimental colour and material combinations.

The basic concept of the flat watch with a large dial is similar to a blank canvas in that it constantly encourages new works of art to be created. These artistic possibilities were recognised by artists such as Andy Warhol and Salvador Dalí, who created their own series for the Piaget or had collections named after them.


The Altiplano in the spotlight

He is considered one of the most important producers of modern day music and has already won several Grammys and an Oscar for his songs: Mark Ronson. Two different models of the Piaget Altiplano play an important role in the music video for his single “Bang Bang Bang”. In the video, Ronson is first seen as a studio guest on a talk show. He wears a white suit and a matching Piaget Altiplano with a white dial. The host then asks him to perform new music he has been working on. As if in Japanese anime and video games Ronson transforms into the mastermind of electronic music. With this change comes a change in the Altiplano model which now has a black dial that looks similar to a vinyl record. Both Piaget models symbolise the versatility of the multitalented English star.


Discover these other series from Piaget