Unparalleled: with the Piaget Polo, you acquire a luxury watch that combines a sporty nature and luxury like no watch has ever done before.  More 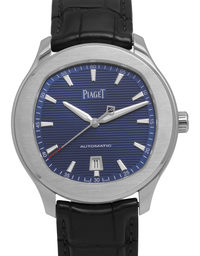 Just in time for the start of the 1980s, Piaget presented the watch series that essentially defined the decade and was one of the most popular accessories that helped shape the style in that period. Thirty years later, the company has reinterpreted the Piaget Polo in response to the changing, but no less modest demands of its customers.


Appearance and technology of the Polo from Piaget

The evolution of a luxury watch

Since its launch in 1979, the evolution of the Piaget Polo can be roughly divided into three main categories. The design concept of the first models was based on the bracelet should be integrated into the case. Thanks to this homogeneous design, the first models in the Polo collection almost had the character of an elegant bracelet rather than that of a classic wristwatch. These Piaget Polo models consisted entirely of 18-carat yellow gold and were finished with gadrooning, a type of ornamental decorative pattern. After the initial success of the Polo series, the company decided to make the models more conventional again. The angular form gave way to a round watch case, while the integrated structure of the bracelet was retained, thus establishing the link between the first and second generation models. A completely new approach was then taken for the relaunch of the series. By merging the previous designs, the Polo S collectioncushion-shaped case but with a dial set in an angular bezel. The choice of material used was also new. The Polo S convinces with its contemporary design in stainless steel and a tasteful interplay of satin-finished and polished components.

Long before its iconic Polo collection, Piaget had already made a name for themselves through their technical expertise, which resulted in some of the world's slimmest movements. A new quartz movement, the calibre 8P, had an astonishing height of just 1.95 mm. It was the congenial technical partner of the first Polo watches. However, for the Polo S Piaget employs its own automatic movements. The 1110P and 1160P movements transform the former jewel of the crown into a reliable chronograph collection, in which some models even have a tourbillon and flyback function. The corresponding calibres here are the 880P or the 882P. This finesse is also reflected in the dimensions of the Polo and Polo S watches. Ranging from 25 mm to 42 mm, the models can also be worn comfortably on narrower wrists and tick all the right boxes for day-to-day wear with their classy understated style.


How much does a Piaget Polo cost?

The new collection of Piaget's classic, the Polo S, is aimed at watch lovers who are at the start of their luxury watch journey. Nevertheless, you can still end up investing well over €10,000 for a Polo S model. Those looking to start off with something a little cheaper should consider buying a certified pre-owned Piaget Polo.


The success story of the Polo

In 1979, a new member joined the Piaget watch family: the Polo. The mastermind and godfather of the new model was Yves G. Piaget, the fourth generation of the Piaget’s to continue the family tradition of watchmaking.

The model was the answer to news demands that the company felt were coming from the American market in particular. The time was up for watches that purely served the purpose of precise timekeeping. The market was now calling for models that combined sportiness and luxury. Similar to the way social practices had been challenged and changed since the early 70s, the traditional art of watchmaking had to now adapt as well. Piaget's answer to these requirements was not just another fine timepiece. The result was in fact a piece of jewellery. A precious jewel by which the people of a certain ilk could recognise themselves. Thanks to Maison Piaget's expertise in jewellery and watchmaking, it wasn’t long before the solution was found. But now Piaget had to find the right name as well. Yves G. Piaget finally came up with the right solution thanks to the sport, which united the sophisticated public that Piaget wanted to target with this new model. Polo, an exclusive and challenging sport, perfectly matched the aura that the Swiss watch brand wanted to surround their new collection. But despite its exclusivity, the appearance of the Piaget Polo was by no means intended for this select circle alone. Yves G. Piaget chose the World Polo Championship in Palm Beach and the wrist of Ursula Andress, the first and probably most popular Bond girl, to officially mark the launch of the brand’s new series. The Piaget Polo series was a resounding success. Just a few years later, Piaget generated a third of its turnover from the sale of Polo models alone. Piaget have to be applauded for the fact that they didn’t rest on their laurels following the success of the first generation Polo models. The series was constantly developed further and caused a stir at the relaunch in 2016 when a completely new concept was presented. It is therefore unsurprising that Piaget have once again set new standards for luxury timepieces that are bursting with dynamism and elegance.


Icons in their own right: a Bond Girl with the Polo

Her appearance in Dr. No is still legendary. Ursula Andress emerges from the water like the goddess Venus and walks on to the beach of the mysterious island of Crab Key. There she meets James Bond as played by Sean Connery, who is on the hunt for Dr. No. The film marked the beginning of a movie stellar career for both Andress and Connery. In 1980, Andress agreed to act as an ambassador and spokesperson for the new Piaget Polo series.


Other interesting series from Piaget

If the elegance of the Polo series appeals to you, you might also be interested in these series from the Swiss watch brand: