With the Rado Ceramica, the company launched the sleek black model of the watch industry. Simple and timeless, this iconic design effortlessly fits into any setting and easily attracts attention for its wearer.  More 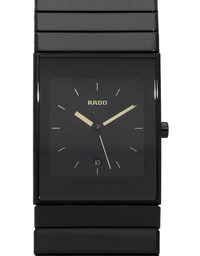 
The Ceramica collection consolidates Rado's reputation as the Swatch Group's avant-garde brand. Rado has been revolutionising the use of high-tech ceramics in the art of watchmaking since 1962. With the Rado Ceramica, the brand helped to introduce the advantages of the material to a wider audience.


Even an established series needs rejuvenating, which is why Rado collaborated with the internationally famous German industrial designer Konstantin Grcic in 2016 to give the Rado Ceramica a fresh new design. The newly designed Ceramica by Grcic deliberately distances itself from the style of the previous models in several respects. The satin-finished black dial on the new models and the bracelet are matte effect and in contrast to the shiny and shimmering versions from the 1990s. Grcic put more focus on the dial, thus improving the readability. Where there used to be a smooth join between the bracelet and case, he widened the dial so as to set it off from the bracelet. In addition, while the inner band of the ceramic bracelet was previously made of plastic, the new models are made of PVD-coated stainless steel.

The new dimensions of the Rado Ceramica watches make them fairly sizable, with the outer measurements of 30 by 41.7 mm and a case thickness of 12.3 mm. Fine details such as the rotating anchor logo of the brand have of course been included in the new models. The new automatic Ceramica houses the precise ETA 2671 movement that boasts a power reserve of 38 hours.


How much do pre-owned Rado Ceramica watches cost?

When Rado officially launched the Ceramica series in 1990, the company was none the wiser that they would soon have to reposition themselves on the market. At that time, Rado was a luxury brand of the Swatch Group and impressed with its futuristic design and special focus on the Chinese market. The Rado Ceramica was a perfect fit for this model: Simple, beguiling and with the new ceramic case that was also technically cutting edge at the time. However, in 1993, Jean-Claude Biver decided to restructure the Swatch Group. Rado’s brand philosophy was unaffected, but they conceded the Chinese market to Omega, focusing more on the entry-level target market instead.

However, this didn’t stop Rado from continuing to strive for innovation. In 1998, the Ceramica became the first watch to produce plasma high-tech ceramics. This process involves heating white ceramic in a melting furnace. The gases released following blasting of the material at 20,000°C transform the white ceramic into a new material with the ceramic itself reaching 900°C. This process creates a colour and texture reminiscent of stainless steel, but which has the same properties as ceramic. After testing on the Ceramica, it was used as the standard process for making series such as the HyperChrome and DiaMaster.


Other Rado series worth investing in

* Terms and conditions apply
All prices include VAT. If differential taxation in accordance with §25a UStG is applicable the VAT will not be reported separately.
Watchmaster ICP GmbH | Charlottenstraße 60 | 10117 Berlin | Germany
© Watchmaster ICP GmbH
# 4dc75a419