Orange Hand, Freccione or Steve McQueen: The Rolex Explorer II 1655 has many names. As one of the most popular Rolex vintage models, the Ref. 1655 regularly hits record-high prices and is considered as an excellent investment.  More 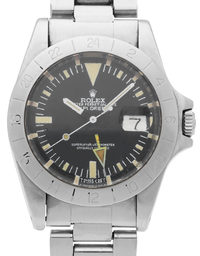 Models of the Rolex Explorer II 1655 with the nickname Rolex "Steve McQueen" are highly sought-after among watch collectors. Sometimes, you're lucky to find some of these vintage references in the Watchmaster online shop, of course, checked, refurbished and certified.

Can you tell why a watch is so popular among watch enthusiasts by simply looking at it? At first sight, the Explorer II Ref. 1655 is a perfectly crafted luxury watch. The dial is black with white, luminescent indices and hands, which provides excellent readability. At 3 o'clock there is a cyclops lens highlighting the date window. The orange hand used for the 24-hour display is very prominent. Like all Rolex watches, the bracelet is made of Oyster steel.

So, all the same with Rolex? Not at all. Special features of the "Steve McQueen" are the details that changed the look of the watch during the production between 1971 and 1985. Watch collectors, especially those of vintage Rolex models, pay particular attention to details. Obviously, there is no difference when it comes to used Rolex Explorer II models. With the Ref. 1655 there are a few details you should pay attention to. The first two versions of Ref. 1655 still had needle-shaped second hands. Starting in 1978, the second hand was equipped with an illuminated dot and counterweight. Also in the year 1978, the previously folded Oyster bracelet was replaced by a more massive one. The fixed bezel also went through a development process over the years. The first version still had the numbers close to the inner edge of the bezel, but in the years 1973/74 they were put closer into the middle. Up to case number 3.5XX.XXX, the case was thinner, which can be seen at the crown protection on the thinner case that runs towards the crown (looked at from 6 or 12 o'clock).


How much does a pre-owned Explorer II Steve McQueen cost?

Explorer II references at a glance

How a mountaineer's watch got named after a racing driver


For collectors of vintage luxury watches the Ref. 1655 of the Rolex Explorer series is more than just an insider tip. It is the expression of taste, expertise and a certain amount of courage to not limit yourself to commonly known watch models. Although today there is a certain hype about the Rolex "Steve McQueen", the watch used to be more of a shelf warmer before it got the name of the famous actor.

The – rather young – history of the Explorer II began in 1971, when the first model of the series, the reference 1655, was introduced. It had the same calibre 1575 as the current GMT Master 1675 at that time, a watch series whose further development would always have an impact on the Explorer II. However, the major difference to the GMT Master was the fixed monochrome bezel with 24-hour engraving. Unlike the Explorer and Explorer I series it does not have Arabic numerals nor a date display at 3 o'clock. The special feature that made the Explorer II break new ground, was the combination of the bezel and the orange hand circling the dial within 24 hours. It was intended to help speleologists and other people staying in dark environments for a long time to keep track of time. Moreover, it was possible to keep an eye on two time zones simultaneously. This detail was the source of the reference 1655's first nickname, "Orange Hand".

In 1985, the production of the Explorer II 1655 was discontinued to be replaced by the new series with the reference number 16550. This led to an enormous increase of the value of the Rolex 1655 during which even inexpensive watch models of the new reference were equipped with "Orange Hand" components in order to resell them at higher prices. When the public saw the American actor Steve McQueen wearing a Ref. 1655 privately, the Explorer II models of this reference eventually became an absolute favourite within the watch community. Since then the former "Orange Hand" was called "Steve McQueen".

Steve McQueen, the daredevil of Hollywood, is one of them and gave the watch its nickname Explorer II "Steve McQueen". There's no image to confirm this rumour, but perhaps that's what makes it so attractive for many watch enthusiasts to wear this model in memory of the famous actor and racing driver.

A mountaineer and explorer watch eternally associated with the name of a racing driver? Perhaps as a nickname, but the watch was present on a memorable mountain expedition. As the only companion, so to speak, an Explorer II "Orange Hand" reached the summit of the Nanga Parbat with Reinhold Messner. It was the first solo ascent of the eight-thousand. The successful mission and the impeccable functioning of Messner's watch clearly demonstrated the outstanding durability of the 1655 series.