TAG Heuer has a long-standing relationship with motorsport that is steeped in history. With the Classic Monza series, the watchmaker pays tribute to a very special driver and his racing team.  More 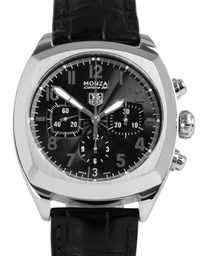 At the beginning of September 1975, Niki Lauda took third place to retain top spot in the championship. He won his first world championship title and helped Ferrari reclaim the Formula 1 throne after more than a decade. Heuer, the official timekeeper of Ferrari at the time, took this success as an opportunity to create a limited-edition watch series. Since then, the TAG Heuer Classic Monza has had a successful and equally eventful history.

An entry-level watch with technical and visual surprises

The TAG Heuer Classic Monza is a reissue of the series from the 70s. The design and movement, however, were based on the vintage chronographs of the 30s. As such, the series has developed a very unique character. The diameter of the Classic Monza is 38 mm with a height of 13 mm. Its compact design provides a secure fit on the wrist and makes it a particularly attractive choice for watch fans with narrower wrists. The adjustable bracelet is attached to a bar between the lugs of the case, meaning it can be adapted to fit any wrist circumference. The bracelet in fine crocodile effect leather closes with a folding clasp. In comparison to a pin buckle fastening, the material of the bracelet is protected, and the strap can’t be opened accidentally. Unlike the models from the original series, the case is not in black, but is instead crafted from polished stainless steel. The dial is covered in lots of details but is still clear to read. The Classic Monza has three totalisers at 3, 6 and 9 o'clock and a well-positioned date window between 4 and 5 o'clock. Another highlight of these models is their excellent readability in the dark, which is helped by the fact that the hands and indices are covered with a luminescent coating. The movement is a Calibre 17, which is based on the ETA movement 28942 and provides a power reserve of 42 hours.


How much does a pre-owned TAG Heuer Classic Monza cost?

A pre-owned Classic Monza is a great entry-level model from the wide range of TAG Heuer watches on offer. We have put together some Classic Monza models and prices that are available at Watchmaster currently.


The history of the Classic Monza

The groundwork for the Monza was laid by the partnership between Heuer and Ferrari, which lasted from 1971 to 1979. As the founder of the sports car manufacturer Enzo Ferrari, did not trust the official timekeepers of Formula 1, he commissioned Heuer to produce a custom timepiece for the Ferrari racing team. Thereafter, the logo of the Swiss watch brand was added to the racing team's overalls and cars. Despite their big ambitions, however, Ferrari went through a dry spell without any championship titles. Several years had already passed since the last victory of a Ferrari driver. But then Niki Lauda came along, who succeeded in taking Ferrari back to the top of Formula 1 with the help of the head of the racing team and chief designer.

To celebrate Lauda's first world championship title and the constructor's title for Ferrari, Heuer designed the Monza watch model. The model is aptly named after the racecourse in Italy where Lauda secured the title. With this model there was a conscious effort to make a functional, purpose-built watch. A special feature was the black coloured PVD case as well as a tachymeter scale and a pulsometer to measure heart rate. The Calibre 15 was a revised version of Calibre 11, one of the first automatic movements in the world. The Monza watch models were very popular, partly because of their affordable price, but the series was always overshadowed by other TAG Heuer series such as the Monaco, Carrera or Camaro. At the turn of the millennium, the series was re-launched under its new name. However, the TAG Heuer Classic Monza wasn’t so much of a reissue of the models from the 1970s but more of a reinterpretation of the original chronographs from the 1930s made by the brand. The TAG Heuer Classic Monza turned out to be a commercial success – but once again, competition from other models designed by the company was its downfall.

Since TAG Heuer wanted to concentrate on fewer models and series in the future, the choice between the Monza and Monaco had to be made with the latter prevailing – an understandable choice and an interesting turn of events for watch collectors. The short period that they were in production for and the relatively low price of pre-owned TAG Heuer Monza watches make them a good investment. Since the discontinuation of the Classic Monza at the end of the 2000s, second-hand models have enjoyed a continuous increase in value.


Other popular series from TAG Heuer

* Terms and conditions apply
All prices include VAT. If differential taxation in accordance with §25a UStG is applicable the VAT will not be reported separately.
Watchmaster ICP GmbH | Charlottenstraße 60 | 10117 Berlin | Germany
© Watchmaster ICP GmbH
# 10e64c9ea