Luxurious and comfortable while always focused on sports, the Grand Carrera offers an update for the beloved TAG Heuer classic.  More 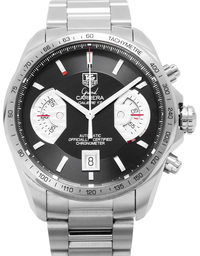 Rounding off the Carrera line-up, the TAG Heuer Grand Carrera is the luxurious and prestigious sibling of the iconic Carrera series. With impressive complications and high-quality materials, Grand Carrera watches are a very stylish alternative to the brand's sporty appearance without losing sight of it.

If you feel drawn to this style and would like to own one of these timepieces soon, then take a look at our range and fulfil your dream of having your own luxury watch today. Whether you pay by instant bank transfer, PayPal, Visa or convenient financing is entirely up to you. Once we have received your order and the payment process has been completed, your certified, pre-owned TAG Heuer Grand Carrera watch will be on its way to you via insured shipping. If you have any questions, our customer service is always happy to help.

Give your Carrera the update it deserves


The idea behind Grand Carrera watches was to give the Carrera a luxurious update. It has been modified in several tiny details including the handcrafted watch lines, the sapphire crystal back, a double crown and the detailed Côtes de Genève decoration. The signature touch is the rotating disc system that replaces the lower dial. It provides better readability, as the eye no longer has to concentrate on the entire dial but only on a clearly marked part, and gives more freedom in terms of design.

The movement itself is also subject to this pursuit of quality. All models have an automatic movement and are COSC certified chronometers. Therefore, the Grand Carrera is the only TAG Heuer series that is not available as a quartz version. The bracelet is available in stainless steel and leather, while the chronographs are also available with sporty rubber straps.


The history of the collection

From the course to a prestige object


Every brand for luxury watches has a watch which is building its prestige. For TAG Heuer, one of those is the Carrera. The watch is unmistakably associated with the young entrepreneur Jack Heuer who already managed the Heuer family business at the time. As an enthusiastic fan of motorsports, he established Heuer as the official timekeeper for races and was often to be seen next to the tracks. This was also the case in 1962 at the 12-hour race in Sebring, FL. There, Ricardo Rodriguez, driver for Ferrari, told Jack Heuer for the first time about the Carrera Panamericana – the legendary and feared race in the streets of Mexico. Inspired, he applied for a patent on the name and soon began to design the watch that would change motor racing forever. Simple yet avant-garde in design with a fixed bezel, it was perfect for the cockpit. The rest of the story is like a montage of the most famous faces in the race and show circus: Nicki Lauda, Ayrton Senna, Steve McQueen and many others were soon all to be seen with a Carrera on their arms.

When TAG Heuer decided to relaunch the Carrera the road was anything but easy. Launched in July 2007, the Grand Carrera was TAG Heuer's first new series after the SEL in 1987 and was therefore subject to special observation. First, it was to be marketed under the name "Vanquish" before Jack Heuer gave his veto. "I usually stay out of business, but I was involved in the Grand Carrera. She had a different name at first, Vanquish, but I didn't like it. They said there was an Aston Martin with the same name, but I just thought it wasn't a perfect match for a watch. This was one of the few times I gave resistance. In the end, they didn't ask me what I thought of Grand Carrera, but I was delighted, of course", Heuer remembers in an interview.

The Grand Carrera was in development for four years. According to Christoph Behling, Chief Designer of TAG Heuer, they spent a good year designing the case and bracelet to ensure optimum comfort. Jack Heuer remembers the watch going through three design processes before the bezel was moved inwards as in the Carrera, giving the watch the necessary depth. This drive for innovation has always been important for Behling. With the Calibre 36, TAG Heuer was the first company to visualize the breath-taking precision of Zenith's El Primero movement.

TAG Heuer's heart beats for sports – and increasingly for lifestyle


TAG Heuer has become famous for its sponsorship of motor sports and, although the brand has always remained true to its history and most recently supported Red Bull Racing, it has also made a name for itself off the track in recent years. Whether in football as a sponsor of the major European leagues and in an exclusive deal with Manchester United, or in rugby, tennis and ice hockey, TAG Heuer stays closely connected to sports. Within the last years, TAG Heuer has increasingly established itself in the lifestyle market thanks to the initiative of its former CEO Jean-Claude Biver who can count on fashion models such as Bella Hadid and Cara Delevingne as well as actors and artists such as Chris Hemsworth, J Balvin and Li Yifeng as his brand ambassadors.