The Tudor Heritage Black Bay is a tribute to the best diving watches of the house and at the same time their reinterpretation. The third series of the Tudor Heritage series has been on the market since 2012 and has since thrilled with its modern yet classic design.  More 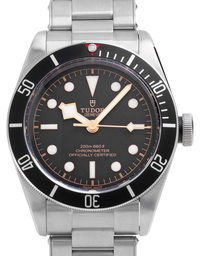 Tudor Heritage Black Bay – a tribute to the diver's watch


At the Tudor Heritage Black Bay, we are dealing with a modern and highly functional diver's watch that, thanks to its moderate price, is also aimed at a young crowd. The sporty design of the Tudor diver watches is based on the famous Rolex Submariner as inspiration. But the brand, which bears the name of the former British royal family, has long since emancipated itself from its sister and won its own fans worldwide.

The retro diver's watch unites the typical features of its predecessors and reinterprets them in an innovative way. Typical here is the vaulting of sapphire crystal and dial and the winding crown made of stainless steel with the Tudor Rose. Also, the Snowflake hands and the iconic Swiss Made inscription are not missing at the Black Bay. While the first model in the series came with a 41mm case, burgundy bezel and rose gold hands and indexes, there are now many different styles available. Even with the bracelet, you have the choice between Oyster steel or leather. In any case, the Tudor-typical, high-quality textile bracelet is included.

The innovative, sporty design is therefore adjustable according to personal preferences. In terms of functionality, however, all models of the series are similar: With a waterproofness up to 200 metres, automatic movement and hands and indices with luminescent mass, the series is considered a powerful functional watch. For young – or young at heart – men and women with a fondness for sporty, high quality and functional design, this watch is the optimal alternative to the mainstream. 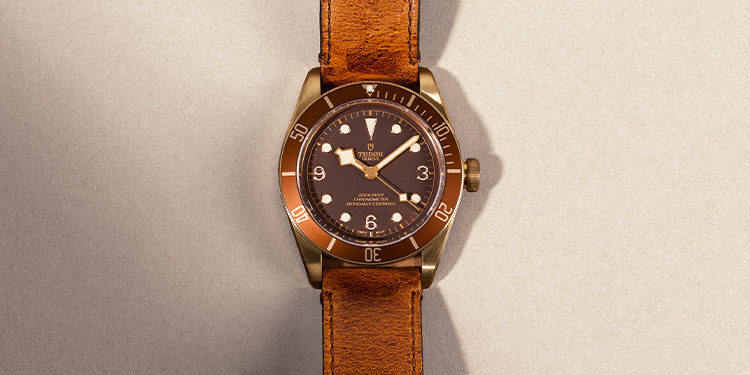 Thanks to the success of the series, we can now choose between a large selection of Black Bay models. Below are some of them:


The history of Heritage Black Bay

In 1946 Tudor was founded as an attractively priced alternative to Rolex by Hans Wilsdorf himself. A Tudor was already available at about two-thirds of the price of a Rolex, but was always just close in design and functionality. Since the emergence of the well-known watch brand, a number of very successful chronographs and diving watches have launched onto the market. Many vintage models, such as the Tudor Submariner, have gained cult status and have risen in value. Finally, the Tudor was able to break away from its big sister: since 1996 direct references to Rolex disappeared from the cases, crowns and bands of the watches.

In 2010, Tudor finally established its Heritage series. With the Heritage Chrono the brand paid homage to its chronographs and finally, the Black Bay came in 2012 in honour of Tudors diving watches on the market. The Heritage Black Bay is by no means the reinterpretation of a particular watch, but it unites the best Tudor diver watches of the 20th century in function and design. It is thanks to the success of the series that today we can decide between a large selection of different Black Bay models.

The Black Bay was soon able to win over a number of prominent brand ambassadors. Under the motto "Born to Dare" different stars show themselves with the high-quality watch. David Beckham, for example, knows how to skilfully combine sportiness and style. Successful not only as a footballer, but also as a model and style icon, he combines the attributes that are also his own. But among prominent women, the Black Bay fans will find: Lady Gaga, for example, who has always stood for innovative, self-confident art – also with regard to her clothes – she wears the fashionable diver's watch. The strength that radiates the robust watch also embodies the rugby team "All Blacks" who wear the Black Bay Dark matching their team colours. Whether in sports, pop or fashion world – the Heritage Black Bay finds by its diversity in every area self-confident, strong supporters.

* Terms and conditions apply
All prices include VAT. If differential taxation in accordance with §25a UStG is applicable the VAT will not be reported separately.
Watchmaster ICP GmbH | Charlottenstraße 60 | 10117 Berlin | Germany
© Watchmaster ICP GmbH
# 4890ec65b