The Tudor North Flag owes its name to the British North Greenland Expedition, whose members wore Tudor watches on their wrists. The hybrid of steel with ceramic components and the manufacture caliber make the modern Tudor North Flag a functional companion with high-quality.  More 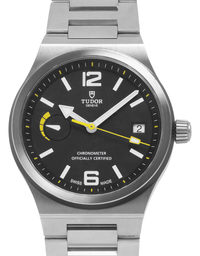 Tudor North Flag watches are the companion for the modern adventurer

The Tudor North Flag not only convinces with high-quality materials and sporty-elegant design, but is also considered a reliable scientific instrument. The launch of the Tudor North Flag was one of the highlights at the Baselworld 2015. Not only did Tudor launched a new series, but they developed also the first in-house manufacture movement - the MT5621. It is regulated by a oscillator with variable inertance and a silicium spring. This spring is completely overstrung by a bridge which causes its extraordinary robustness. The bidirectional self-winding mechanism was tested by the prestigious Swiss testing institute Contrôle Officiel Suisse des Chronomètres (COSC), which gave the North Flag its certification. With a 70-hour power reserve, whose status is indicated by an extra dial at nine o'clock, the movement is considered particularly smooth. The caliber runs at a frequency of 28,800 alternations per hour. The centerpiece of the North Flag has also become an eye-catcher: The sapphire crystal caseback reveals the view on the movement.

In addition to the hour, minute and second hands, the watch shows a date window at three o'clock. The date change takes place automatically. Optically the North Flag is characterized by flowing lines and finely honed components. These are all designed as a combination of brushed stainless steel and frosted ceramic. Completely satined, the North Flag has overall a matte look. This is complemented by a subtle reflection of the lightly curved surface. The bracelet, which blends seamlessly into the case, fits into the flowing, ergonomic design of the watch. The large winding crown also looks finer thanks to its conical shape.

The History of the North Flag: The watch of the Adventurers

In 1946 Tudor was founded by Hans Wilsdorf as a competitively priced alternative to Rolex. Already available for about two-thirds of the price of a Rolex, but always equal in design, quality and functionality, it quickly gained popularity. Cases and straps were made by Rolex, which was clearly marked on the straps, buckles, clasps and case bottoms. Since then, Tudor has launched several successful series, including many toolwatches. Numerous vintage models, such as The Tudor Submariner, are now considered absolute icons and have risen in value. Tudor finally gained independence from its big sister: From 1996, the references to Rolex disappeared from cases, crowns and straps.

With the North Flag, Tudor ties in with the success story of its functional watches, but also establishes a new era by launching the first own manufacture caliber. The robust watch of the British North Greenland expedition from 1950s gave the watch its name. The researchers did their work under the most harsh conditions and wore the North Flag prototype on their wrist. Even today, the North Flag is still known as the scientific instrument of yore: Functional, sporty, robust and still very noble it fits everybody and every modern adventurer!

Tudor brings together a whole range of prominent brand ambassadors. The motto Born-to-Dare is the binding element between superstars such as David Beckham, Lady Gaga and Jay Chou. Tudor stands for self-confidence and strength, for style and sportiness - as well as its famous wearers. Even a whole rugby team, the "All Blacks", are outfitted with the Tudor Black Bay Dark to match their team colors.

Tudor's watches are made for fighters and pioneers. No wonder they find so many supporters in sports as well as in arts!

The current collection of the North Flag

The Tudor North Flag is currently available in two variants, which differ by their bracelet:

You can easily find your certified, used Tudor North Flag in our online shop. Used luxury watches are usually cheaper and at the same time a good investment. When you find your favorite watch, you have different payment options. With just a few clicks you can complete your purchase with PayPal or by credit card. Alternatively, you can opt for flexible financing. Pay your purchase in small, convenient installments. If you have any further questions on purchasing and financing options, please visit our website or contact our customer service.
What our customers say about us