With the Prince Oysterdate series, Tudor succeeded in taking the design of the legendary Oyster case and adding its own unique twist. The Prince Oysterdate is still considered to be a functional, reliable and robust model to this day and enjoys huge popularity thanks to its design.  More 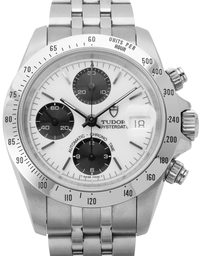 Buy a truly revolutionary watch with the Prince Oysterdate


The Tudor Prince Oysterdate generally refers to all Tudor watches with automatic movements, date functions as well as Oyster bracelets and became well-known for its “Big Block” chronographs in particular. While Rolex was initially involved in the production, Tudor gradually began to produce the watch parts alone in order to set themselves apart from their big sister brand and develop their brand profile.


What does the Prince Oysterdate stand for?

If you take a look at the Tudor’s back catalogue, you will almost get dizzy deciphering the various “Prince”, “Oyster” and “Date” variations. To get a better grasp of things, it is helpful to actually understand the origins of the Tudor Prince Oysterdate. This requires a little journey back in time.

It starts with the obligatory connection to Rolex. Hans Wilsdorf, the founder of the company, always saw Tudor as the cheaper alternative to his prestigious Rolex brand. Tudor had access to the same materials and technology as Rolex but delivered them to a wider audience. Many of the early models were equipped with the water-resistant Oyster case and sold as the Tudor Oyster. On this basis, “Oyster” at Tudor usually refers to the use of the Rolex Oyster bracelet. The Oyster Prince then followed in 1952 and introduced the automatic movement developed by Rolex. At Tudor, the addition of “Prince” in the name is therefore often synonymous with an automatic movement. The term “Date” is relatively self-explanatory and is added to Tudor watches with date functions.


Prices of the Tudor Prince Oysterdate

How much does a pre-owned Prince Oysterdate cost?