The Tudor Submariner is one of the most influential series in the Tudor range and has had a major impact on the company profile. Its style lives on today in series like the Tudor Heritage Black Bay.  More 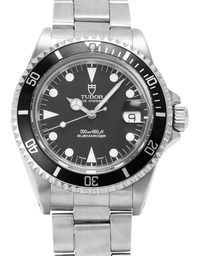 
One of the most interesting series in Tudor's extensive catalogue is the Tudor Submariner. The series has been discontinued since 1999, but is now considered a vintage classic whose influence is still visible in the current collection. It was the Submariner that gave Tudor its popular "Snowflake" hands and established the brand's renowned crown protection. Launched in 1954, the Tudor Submariner itself underwent a significant transformation from an elegant diving watch to a fully-fledged sports watch.


How much does pre-owned Tudor Submariner cost?


The history of the Tudor Submariner's references

The origins of the Tudor Submariner


The first Tudor Submariner models generously incorporated elements of a classic dress watch. Although they were waterproof up to 100 meters, functionality was not the primary concern with these early models. The Oyster Prince Submariner made its debut in 1954 with the Ref. 7922, which was visually very similar to the Rolex Submariner, probably because both series were developed at the same time. The difference was inside: the Tudor Submariner was powered by a Fleurier 390 movement, while Rolex already made and installed their own movements. In 1955, Tudor tried to achieve the greatest possible separation from the Submariner, which is especially apparent in the details. Instead of the Mercedes hand, which Rolex was used to, the Ref. 7923 by Tudor features a baton hand and a lollipop second hand. The caliber was made by ETA and had a manual winding mechanism, so the model was much flatter on the wrist. Accordingly, instead of "Oyster Perpetual" on the dial, only the writing "Oyster" was present. After its introduction in 1958, an enlarged crown gave the Ref. 7924 a better feel and simplified the operation underwater.


From dress watch to sports watch


Tudor launched the fourth Submariner, Ref. 7928, in 1960. This was to be the blueprint for all subsequent models that made the transition from a dress watch to a high-quality sports watch. The square crown guard and thicker lugs increased the diameter of the watch from 37 to 39 mm. In the course of the eight-year production period, the crown protector would become more and more rounded off in later models. These early models are referred to as pointed and the later as rounded crown protectors. The bezel also changed from coin-like inserts to notches at a 45° angle, which increased the feel.

Additionally, the well-known 15-minute scale was now also found on the bezel. The Fleurier 390 calibre ticked inside again. In 1969, Tudor launched two new models that redefined the style: the Ref. 7021 with date and the Ref. 7016 without date. Instead of the rounded indices, the dial was surrounded by small squares and was now also available in blue. The date disc of the Ref. 7021 was two-tone: the odd numbers were displayed in red and the even numbers in black. They also changed from a Fleurier to an ETA 2483 calibre. But the most significant were the new wide hands, which are affectionately named "snowflake" by fans.

In 1975, Tudor introduced Ref. 9401 and Ref. 9411, which were sold in both black and blue. Collectors still consider them the traditional Tudor Submariner watches. The Ref. 9401 was driven by the ETA calibre 2776, the Ref. 9411 by the ETA calibre 2784. Both movements were slightly modified by Tudor. Two bracelets were available for the references: the Rolex Oyster bracelet 7836/0 with folding clasp and the rare Oyster bracelet 9315/0 with the patented "flip-lock" system.


The most recent and final Tudor Submariner models


Since 1989, Tudor has offered the 7900 series, the most recent Tudor Submariner series to date. The Ref. 79090 was a return to its roots and was strongly inspired by the first Tudor Submariner models and the Rolex Submariner itself. The round indexes and Mercedes hands and the Cyclops lens above the date window returned. The polish and the workmanship were high-quality and clearly showed the development of Tudor. In 1995, the last Tudor Submariner reference to date debuted under the Ref. 79190. Here, the focus was mainly on refinement, as well. The case was cut sportively, the bezel was made of stainless steel. The indices now had borders, the crystal was made of sapphire glass and no longer plexiglass. After the series had reached its peak, Tudor decided to put it to rest and finally discontinued it in 1999.