From classic three-hand watches with a date window, sporty chronographs or elegant GMT watches with a world-timer function, the Zeitmeister Collection by Germany's largest concessionaire Wempe has the right model for every taste.  More 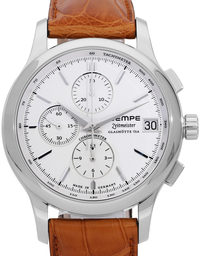 Under the Wempe Glashütte i/SA brand, Germany's largest jewellers and concessionaire Wempe proves that they are also highly capable of producing top-quality wristwatches of their own. With the establishment of the new manufactory in Glashütte, Kim-Eva Wempe is fulfilling her grandfather's long-awaited family dream and leading the company into the future. Watch enthusiasts can expect high-precision timepieces from the Wempe Zeitmeister collection, which can be easily combined with different looks and styles due to their simple elegance.

The Wempe Zeitmeister also proves that watches from Germany are more than a match for their Swiss competitors. With the perfectly crafted stainless steel cases and the classically elegant design, which includes both round and tonneau-shaped models, Zeitmeister watches are suitable for all occasions. The dials prioritise readability and functionality but are at the same time of uncomplicated and perfectly formed beauty. In contrast to the Chronometerwerke collection, Wempe mainly uses ETA movements for the Zeitmeister series, which are finished in-house at the manufactory in Glashütte.

The beginning of a new era: the Wempe Zeitmeister

With its release in 2006, the Wempe Zeitmeister was one of Kim-Eva Wempe's first projects. She has managed the company since 2003 and established a manufactory in Glashütte, which was the long-standing dream of her grandfather Herbert Wempe, who ran the company from 1921 to 1951. The Glashütte Observatory was chosen as the watchmaking manufactory and is now the production site for the two-watch series that are crafted under the Wempe Glashütte i/SA brand name.


The Zeitmeister isn’t just assembled and tested at this site, but it also undergoes a chronometer test to verify the accuracy of the watches. The manufactory in Glashütte is Germany's only test centre for wristwatch chronometers using ISO standards. The notable difference between the German chronometer test and COSC certification is that instead of testing outside the case like COSC certification, the movement already fitted inside is tested. With this precision in mind, the collection has grown accordingly in recent years. In addition to the classic version, pilot’s and diver's watches, quartz models and diamond-embellished dress watches have been added, skilfully displaying Wempe's diversity.


Wempe also used other materials such as ceramics in limited editions and released a manually-wound wristwatch with annual calendar and moon phase to mark the brand's 10th anniversary. The brand pulled off a major coup when Herbert Grönemeyer came on board to design the Zeitmeister Stahl 1, which was launched in 2018 and the two versions were limited to just 250 pieces each. The rectangular Ref. WM690010 has a powerful green dial in the style of his first dark green Jaguar Mark II classic car, while Ref. WM690011 has a bold steel blue dial.


As Wempe is still a relatively young, independent brand, the company focuses much more on quality than quantity. With the Wempe Chronometerwerke series, the Hamburg-born watchmaker doesn’t just celebrate its own quality control and certification, but also proudly presents its high-quality yellow gold cases and the specially developed CW4 (automatic) and CW3 (hand-wound) calibres. Depending on the model, these watches are also equipped with small seconds counters and a power reserve.

Different styles are available within the various sub-collections of the Zeitmeister. These include the Zeitmeister Fliegeruhr and the Zeitmeister Sport. These are fundamentally different watches, which could easily exist as standalone series. However, the comprehensive Zeitmeister collection includes diving watches, pilot's watches, GMT watches, chronographs and classic three-hand watches. Wempe relies on well-known designs that are pleasing to the eye and can be combined to great effect.