During its twenty years of cooperation with IWC, Porsche Design launched some incredible timepieces. The company did not have any initial difficulties, we are talking about Porsche Design. The revolutionary design thinking can definitely be found in the design language of the watches.  More 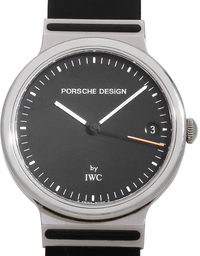 How a sports car changed the watch industry

At the sound of the name "Porsche", not only car enthusiasts immediately think of the German sports car icon from Stuttgart-Zuffenhausen: The Porsche 911. Hardly any other sports car offers such a high recognition value. That is also the reason why the silhouette of the vehicle has not changed since its introduction in 1964. The 911 is and stays the flagship of the brand. An important detail in every Porsche model is the analog clock on the dashboard. This symbolizes the manufacturer's love for watches. The founder and designer of the legendary 911, Professor Ferdinand Alexander Porsche, recognized the potential behind this feature. The designer became independent in 1972 with his company "Porsche Design" and revolutionized the watch world with the "Porsche Design Chrono I" presented in the same year. Ferdinand A. Porsche created a perfect complement to the gauges of the Porsche 911, an optimum in readability was the main focus. The completely matte black chronograph became target of criticisms. The enthusiasts said Porsche should stay focused on the construction of sportive automobiles. In the midst of the quartz crisis, the Porsche Design timepiece sold more than 50,000 times and thus defied the criticizing journalists. In retrospect, it can be seen that F.A. Porsche demonstrated foresight - today almost every brand offers black watches in their actual collection.

In 1978, the founder found a partner who, like Porsche Design, was passionate about innovation and design: IWC. From this 20 years lasting liaison emerged some unique timepieces. Including the compass watch (Ref 6520.13.41.0270), which connects an automatic movement with a compass located directly under the dial. The black dial itself is hinged, the links of the bracelet hold another finesse: They are exactly five millimeters wide and individually removable. This offers the possibility of use as a scale on geographic maps. Four years after the start of the cooperation, another timepiece which made a buzz was launched: The Porsche Design by IWC Ocean 2000 (Ref. 3500). A case and bracelet made entirely of titanium was a complete novelty in the watch industry, as the material is incredibly expensive to process which made the mission of the German Navy a true challenge. However, the “Titanchronograph” became an absolute bestseller and soon also offered as a civilian version. It can withstand pressures of up to 200 bar.

In 1998, the contract and thus the partnership between Porsche Design and IWC ended, the renowned Swiss watch company Eterna SA became the new partner of Porsche Design for the following years. Also in this era some legendary timepieces where introduce. Among other things, the bestsellers "Kompassuhr" and "Ocean 2000" were re-produced in 2012 as special editions. Under the name Compass Watch (Ref. P6520) and Titan Chronograph (Ref. P6530) they were symbolically limited to 911 pieces - in honor of the legendary designer and founder Professor Ferdinand Alexander Porsche, who died 5. April 2012.

Optical and technical details of the legends

The Orfina Porsche Design Chrono I revolutionized the watch market. It was the first completely black chronograph. This was absolutely unusual in the 1970s. But designer Ferdinand A. Porsche argued with the gauges of the 911 Porsche which he designed. The sports car icon par excellence: Black dials do not dazzle when reading, white hands and digits provide the perfect contrast. To make the appearance harmonious, the case and bracelet have been coated matt black. The timepiece was offered with two different movements, one with a chronograph complication (the Valjoux / ETA 7750), the other with the Lemania 5100 (Ref. 7176S).

The order to develop a robust diver's watch came from the German Navy. Three variants of the "Ocean Bund" were launched for military use, but demand also increased in the civil sector. In 1982, the Porsche Design by IWC Ocean 2000, a 42.5mm watch with case and bracelet made of titanium was launched. Making a watch entirely out of titanium was a big challenge, but this ensures a pressure resistance of up to 200 bar. In contrast to the marine watches, it features a domed sapphire crystal and the IWC Porsche Design lettering directly above the date window, which is placed at three o'clock. In addition, the watch has an indication of the day of the week, driven by the fast-moving ETA caliber 2790.

The American actor Patrick Dempsey was known for his role in the TV series Gray's Anatomy. There he plays the surgeon Doctor Derek Sheperd, but he is also a passionate racercar driver. Dempsey also contested the Daytona 24 Hours race and the 24 Hours of LeMans. In 2003 he founded his own racing team "Dempsey Racing" and finished fourth in his second participation in the 24hours of LeMans. Dempsey has been driving Porsche for years. As a passionate motor sportsman he wears an IWC Porsche Design Titan Chronograph out of conviction, but above all because of the perfect readability. In June 2014, the 52-year-old actor teamed up with Porsche Design to develop a limited edition of 50 racer chronographs - the "Porsche Design Dempsey Racing Limited Edition". The perfect watch, as Dempsey thinks: "A precise instrument without any frills. As much as necessary, as little as possible!"

Since Porsche Design no longer cooperates with IWC, the models of this era are only available second hand. The most popular IWC Porsche Design vintage watches are:

Who can compete with Porsche? And what else is Porsche Design offering?

Meanwhile, almost all manufacturers have taken up the trend of black watches. And racing chronographs are also offered by other brands. The Sinn 144 ST Diapal (Ref. 144.068) is comparable visually, as well as technically at the same price level, with the Porsche Design Dashboard Chronograph (Ref. 6612.14.50). Both have a tachymeter ring, luminous indexes, date display and both are chronographs. The rubber bracelet they have in common, the Sinn is with 40mm case diameter only two millimeters smaller. But the case of the PD is made of titanium, while the counterpart from Frankfurt is made of steel.

A series of the current collections of Porsche Design is the Monobloc Actuator, a series that combines the engineering of motorsport with technical sophistication. For an example, instead of the traditional pushers, the watches of this series have a single rocker switch - derived from the racing engine of the Porsche 911 RSR. It allows more precise results, because every millisecond counts. Another series is the 1919 Collection. Extremely puristic and elegant, the noble timepieces can be combined with almost any outfit. It has, Porsche typical, a high recognition value - characteristic cutouts on the lug and the nearly seamless transition to the bracelet. With the Chronotimer Collection, Porsche Design presents a range of timepieces in reminiscence of the company's first timepiece. Consistently black dials, the limitation to the essential and perfect readability determine the appearance of the series. In addition, the use of only high-tech materials in all 13 available versions.

If you want to buy an IWC Porsche Design now, you will have to buy a used model of the brand. The cooperation between the two companies has been ended since 1998. However, Watchmaster as a dealer for certified, used luxury watches always offers some comparatively cheap IWC Porsche Design models in its online shop to choose from. You can be absolutely sure not only to get a certified Porsche Design watch, but also to be pleased in regards of the prices. After making a choice, pay conveniently by credit card, PayPal, bank transfer, alternatively you can also finance your IWC Porsche Design. Set your desired installment period and the down payment amount according to your wishes and expect your new timepiece in just a few days from Berlin!
Wat onze klanten over ons zeggen