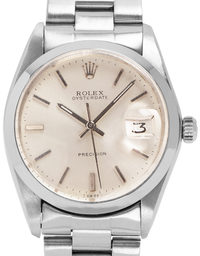 Find out more about the Rolex Oyster Precision

The watch for beginners and collectors - Rolex Oyster Precision

The Oyster Precision is a true vintage watch: today it's a icon in the 60s and limited edition world. With its affordable price and the design in the elegant Rolex style it is very popular as an intro into the world of the luxury brand.

Visually, it is similar to the Oyster Perpetual Datejust, but differs in certain details. It is equipped with a manual wind movement and has a relatively small diameter of 34 mm. Its round case and smooth bezel award it with lots elegance. Its simplicity makes hiter wearable by men and women. Typical for Rolex it has the Logo-Crown on 12 o'clock and the actual name of the Series “Precision” is printed on the dial.

The various versions of the watch make it popular with a wide range of watch fans. The Oyster Precision is made from stainless steel, gold with a leather bracelet, but also like with the famous NATO strap. You can not only vary bracelet and material, the dial is also different in the various models. So there are versions with stick indices, just like those mixed with stick indices and Roman numerals. Even small stars replace the indices on some models. The Oyster Precision is available with and without date display at three o'clock. But not only aesthetically has the Precision much to offer. It is also waterproof up to 100m and so it comes with all the qualities Rolex watches must have.

The Rolex Oyster Precision is an attractively priced classic that is robust and elegant at the same time, wearable every day. Since this is a vintage model, you should make sure when buying it that it is a certified, used luxury watch to protect against counterfeiting and be sure about timekeeping and functionality in general.

The history of the Rolex Oyster Precision

In 1926, the Rolex "Oyster" was introduced, the world's first water and dustproof watch. Since then, the Oyster case has been a hallmark of Rolex functional watches and quickly gained popularity. For example, swimmer Mercedes Gleitze crossed the English Channel with an Oyster (almost) - an over 10-hour tour that had to be stopped short before reaching the finish because of bad weather, but the watch itself survived unscathed. The next milestone in the brand's history was the self-winding mechanism developed in 1931: the Rolex Oyster Perpetual was launched. Amongst other things, this watch was part of the first successful flying expedition over Mount Everest.

At the end of the 1950s, a Rolex Oyster came onto the market, which looks like the Perpetual but is fitted with a manual wind movement: the Rolex Oyster Precision. However, it soon freed itself from the shadow of its Rolex siblings. Not only in the 60s, the inexpensive Rolex variant became the darling of many newcomers. Since not many editions of the Precision were produced, it is now considered a popular collector's item.

Probably the most famous Rolex wearer is the fictional action hero James Bond. In the books above all the Brand is mentioned, only once a series is called by name: The Oyster Perpetual. Definitely recognizable in one of his films is also the Rolex Submariner.

Another famous Rolex is the so-called "Paul Newman Daytona", which was produced strictly limited and therefore has a particularly large collector's value today. The original Newman watch has surfaced and was auctioned for a sensational € 15,228,095 in New York. Another famous actor and race driver is known as a great Rolex fan: Steve McQueen was photographed with, among others, the Rolex Explorer II and the Submariner. Fidel Castro has even worn two Rolex watches at the same time, as various photographs show. The craziest conspiracy theories circulate. We'll never know the true reason for this peculiarity - maybe he just could not decide between Day-Date and Submariner.

Even today, many stars are photographed with Rolex watches. One of the best known is probably Brad Pitt, who could be admired with different models both in the film and on the red carpet.

Save for later
Otrzymaj powiadomienie
Login