For the 60th anniversary of the brand, the SuperOcean Heritage II is a tribute to successful Breitling divers watches of the past. It is waterproof up to 200 m, its sword-shaped minute hand and the arrow-shaped hour hand complete its sporty look.  Mer 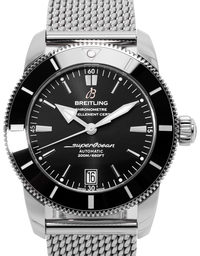 Breitling is often associated with excellent aviation watches. But not only in the air, but also under water, the luxury brand has a lot to offer: The first SuperOcean was introduced in 1957 and was constantly evolving. To celebrate Breitling's 50th birthday, a new watch has been launched that combined contemporary technology with historic design: the SuperOcean Heritage. 10 years later, the watch got an update for the next birthday of the house, since 2017 there is the Superocean Heritage II on the market.

The logo of the company, founded in 1884, shows that Breitling is equally rooted in aviation and water sports. The winged anchor with the curved B has adorned many dials over the years, whether aviator's or diver's watch. The SuperOcean is a water sports watch designed specifically for the needs of divers and suitable for professional use. The series was developed in response to the emerging trend in divers' watches and stood out from rivals such as Rolex and Omega with a water resistance at depths of up to 200 m. Later models, such as the Breitling Colt SuperOcean from 1995, now where capable of diving depths of up to 1,500 m. The Breitling Seawolf, introduced in 2002, even achieved 3,000 m depth. They are equipped with a helium valve to ensure that the case does not break when it emerges from deep depths.

In 2015, a revised version of the series, the Superocean II, was released. It is available in with 36mm, 42mm and 44mm in three different case sizes and different designs. Just in time for Breitling's 50th birthday, the SuperOcean Heritage was introduced. It was mainly based on the original design from the 1950s, but renounced the striking indices and the inward sloped bezel.

It received an update with the Breitling SuperOcean Heritage II exactly 10 years later, with a new bezel and new B20 caliber. At the time of its launch, scuba diving was only accessible to a small group of professional divers and has since become a luxurious hobby. Today, the SuperOcean range is not only worn by amateur and professional divers, but is also a good companion outside water, thanks to its sporty appearance and high functionality. Not only the new collection inspires, even vintage models of certified, used luxury watches are an interesting investment.

The top features of the SuperOcean Heritage II

The Breitling SuperOcean Heritage is a tribute to the original SuperOcean and had already its 60th birthday, 10 years after its launch, Breitling announced with the SuperOcean Heritage II a small update. Already it´s predecessor is based on the original design from the 50th and also brought the former logo back on the dial. The variant of 2017 was initially available in two different case sizes, 42mm and 46mm. Meanwhile, a third size with 44mm case diameter has been added.
The watch also radiates with a new stainless steel bezel with ceramic ring. Even the inner metal ring was in front of the minutes indexes was omitted, so dial and bezel now seamlessly melt into each other. Iconic are also the sword-like minute hand and the arrow-shaped hour hand, which give the watch its special look. It is waterproof up to 200m, the luminescent line indices guarantee optimal readability even in low light conditions.

Spara till senare
Get notified
Logga in