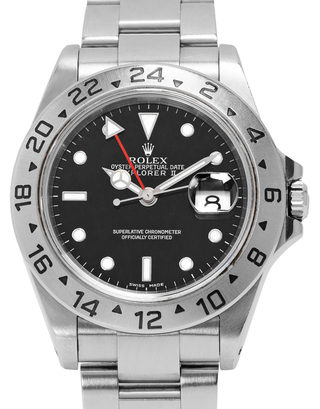 You don't have to plan to conquer the Seven Summits in order to justify buying a Rolex Explorer II 16570. Simply pursue each goal you set yourself, purposefully and unconditionally – just like this watch will on your wrist.

The development of the Explorer series by Rolex has always been driven by the condition of being able to withstand extreme situations without restriction. The first Explorer model appeared in 1953. At that time, it carried the name Oyster Perpetual Explorer in order to pay tribute to the achievements of Sir Edmund Hillary and Tenzing Norgay on the first ascent of Mount Everest. Rolex had supported the mission to test the durability of its watches under real conditions. The Rolex Explorer II, introduced in 1971, was a further development of this mission. It was originally designed to meet the needs of cave and polar explorers, who often work in absolute darkness and cannot orient themselves by the sun. Rolex solved the problem by adding an orange 24-hour indicator to the Explorer II. Despite its comparatively young history, the watch has become a reference among collectors.

The Rolex Explorer II is often referred to as the "most non-Rolex watch" of the Swiss Manufacturer. But precisely because it combines understatement and the high reliability of Rolex watches, it is very popular among those who like to wander on the edges of the well-known world. The Ref. 16570, sold since 1988, is no exception.

If you've been struggling with the question of – finally – buying a Rolex for some time, but have been stopped by the price and prejudiced image, the Explorer II 16570 with black dial could be the ice breaker for you:

The beauty of simplicity: Optical and technical features

There are certainly more colourful and more valuable Rolex models. On the other hand, the Explorer II 16570 is characterised by its compact, durable workmanship and very good readability. In a straightforward way, it embodies the expectations of Rolex and its worldwide wearers for the functionality and durability of a professional watch. The Oystersteel case and the bracelet are forming the frame for the stability of the watch. The Oysterlock folding clasp ensures that the bracelet does not open by itself and will always stay securely on the wrist. The dial is bold in black or white, from which the luminescent symbols of the hours and line indices of the hands stand out very well. Particularly to emphasise is the exceptional luminosity of the coating.

The watch is powered by a calibre 3185 or 3186, which is also used in the GMT Master II and focuses on shock resistance and durability against temperature fluctuations. The Explorer II is waterproof up to 100 m and has a power reserve of 50 hours.

The Rolex Explorer II generations at a glance

As much as opinions differ in question about the Explorer, it is also on its way to becoming a classic. Especially models not being produced anymore in particular are being searched for in watch forums and at online retailers.

The increase in value of the Explorer II is more than €5,000 compared to the original price of a model from 1994. The last price increase was in 2014 (at that time 350 euros) and the period without an increase is already so far back that it is possible to speculate on another price increase. A further guarantee for an investment is the general value stability of Rolex.


Competition within the company

The Explorer's status as an underdog among the Rolex models derives not only from the company's "luxury problem" that basically all of its models have become legends in the watchmaking industry. Some of the in-house competitors are, for example, the following models.