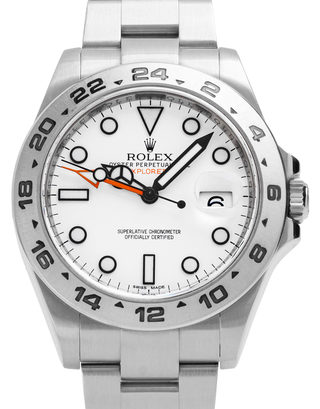 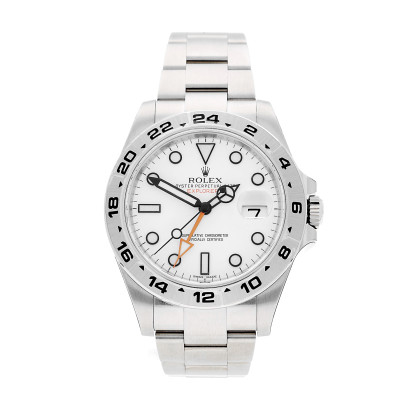 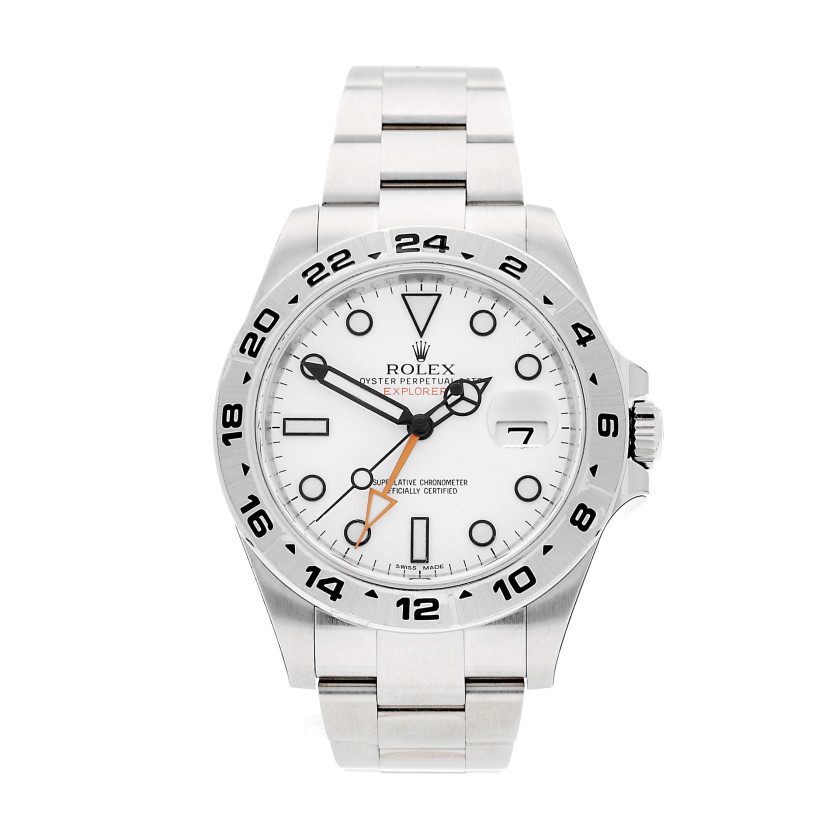 The Rolex 216570 “Polar” White Dial: a style icon for speleologists

Looking to give the popular Explorer a sportier image, Rolex launched the first version of the Explorer II in 1971 with the Ref. 1655. At the time of its release, the series was primarily designed for speleologists, with its most distinctive feature, the orange 24-hour hand, enabling you to determine whether it was day or night outside. Numerous other innovations and versions followed, including the Ref. 16570 which featured a red 24-hour hand, before Rolex finally presented a new edition of the Explorer II in 2011: the current Ref. 216570. This release saw a clear break from the style of the 16570 and a return to the orange GMT hand. It retained the black and white dial of the Explorer II 16570, although the white model’s nickname “Polar” actually refers to the Mount Everest expedition that Rolex sponsored rather than the colour of the dial.

The first thing you notice is that the diameter of the Rolex 216570 “Polar” has been increased to 42 mm (45 mm if you include the crown), which makes it one of the largest models in the Rolex catalogue. This fact was indeed hotly debated among fans of the brand. With this enlargement, the Explorer II is now able to compete directly with the super-size cases of the new Submariner and GMT-Master II. The unique selling point of the 216570 “Polar” is the high-gloss lacquered white dial with the high-contrast black indices. It is clearly arranged, easy to read and not too extravagant, which is perfect for a functional watch like the “Polar”.

In contrast to the GMT-Master II and Submariner, the bezel of the Rolex 216570 “Polar” is still made of stainless steel, which makes it a little more susceptible to scratches, but also offers a more natural feel than the Cerachrom bezels that the new generation Submariner and GMT-Master feature. The satin-finished 3-Link-Oyster bracelet and 5 mm EasyLink extension is also included as standard and has been tried and tested over the years. Inside, the Calibre 3187 provides the power for the white Rolex 216570. Featuring 31 jewels in total, a blue Parachrome hairspring and Paraflex shock absorbers, it is a modernised successor to the Calibre 3186 that is used in the GMT Master II models.

Interestingly, the Explorer II 216570 “Polar” White Dial is much more popular than its sibling model with the black dial. We have put together a brief overview below of how much a Rolex Explorer II “Polar” White Dial costs. The table clearly shows that Explorer II models with white dials have a higher value. This makes the Ref. 216570, and the “Polar” in particular, an attractive investment.


Price comparison of the 216570 “Polar” with other Rolex models


A comparison with the 116710LN and the 116610LN shows that the Rolex 216570 “Polar” is a real underdog. The previously significant price difference of up to €4,000 compared to the GMT-Master II 116710LN shows just how much fans prefer certain series from Rolex. However, this also means that with the Explorer II 216570 “Polar” you can confidently buy a high-quality Rolex at a comparably low price. Lo and behold, the 216570 “Polar” saw an increase in value over time and has reduced the previous €4,000 price difference to around just €1,250 now. While the Explorer II “Polar” hasn’t experienced the enormous increase in value of Submariner 116610LN, it is already well on its way to doing so.