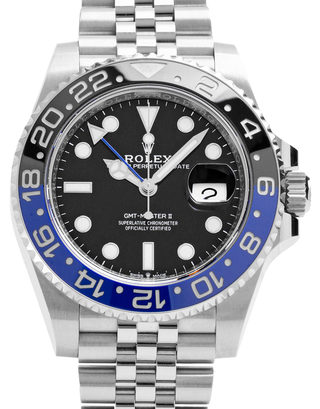 
When Rolex introduced the Ref. 116710BLNR "Batman" with the first two-tone ceramic bezel in 2013, the excitement was enormous. The model quickly became a favourite and disappeared virtually overnight from the Geneva-based watchmaker's boutiques. Not because the model was once again discontinued, but rather collectors and enthusiasts of the brand rushed to get their hands on the new sports watch with its black and blue bezel. Rolex wanted to build on this success and, less than five years later in 2018, it launched its next steel model of the GMT-Master II with a two-tone bezel. The long-awaited "Pepsi" version of the GMT-Master II arrived on the market with the Ref. 126710BLRO. In 2019, Rolex adapted the "Batman" to the new Pepsi model and accordingly fitted the new Ref. 126710BLNR Batman with its Jubilee bracelet, which is known as the "Batgirl" among its fans.

Visual and technical features on the 126710BLNR

After the GMT-Master II (Ref. 116710BLNR) debuted at Baselworld in 2013 and successfully established itself despite its then unorthodox colour combination, the model was given a complete update in 2019 with the GMT-Master II 126710BLNR. In addition to the beloved Jubilee bracelet, its new features include the new GMT calibre 3285 with a 70-hour power reserve. Furthermore, a new case has been introduced as compared to the previous generation. The diameter of the Ref. 126710BLNR is also 40 mm, but the new model's case boasts a slightly different design. Like the "Batman", the GMT-Master II "Batgirl" is completely water-resistant to a depth of 100 meters, has a scratch-resistant sapphire crystal and features the proven bidirectional Cerachrom bezel in the two-tone colour combination of black and blue. Another special feature of the GMT-Master II 126710BLNR is that the additional GMT hand is designed in the same hue as the blue bezel.

The five-row Jubilee bracelet may be considered unfitting for a sports watch by some, but the GMT-Master Collection proves quite the opposite. The high level of comfort provided by the fine-linked steel bracelet speaks for itself and lends the "Batgirl" a touch of glamour. The GMT watch can be worn with a pair of jeans and a T-shirt just as well as with a suit. As a result, Rolex offers the ideal watch for all watch enthusiasts and cosmopolitans who want to be able to check on up to three time zones at a glance.

The 126710BLNR compared with other watch models

A comparison of the GMT-Master II "Batgirl" and Explorer II


The Rolex 126710BLNR is currently one of the most sought-after watch models and consequently one of the most difficult watches to acquire. Long waiting lists put the patience of customers around the world to the test. It is understandable if such a long wait is frustrating. Why not take a closer look at the used market? But, if the prices for a pre-owned Rolex 126710BLNR watch are a little too high, it might be worth considering the following alternative. Rolex offers an equally superb and dependable timepiece in the Explorer II (Ref. 216570) adventurer's watch, which is just as likely to captivate. The reference 216570 comes with an extremely resilient exterior, a fixed 24-hour bezel, an additional GMT hand and an easy-to-read dial. The Explorer II also features the popular and field-tested Oyster bracelet, which gives the watch an even more robust exterior. On top of that, there's a 48-hour power reserve, water resistance of up to 100 meters and a case diameter of 42 mm. A more than worthy alternative.


A comparison of the "Batgirl" and Tudor Black Bay GMT


Another alternative to the popular 126710BLNR "Batgirl" comes from the Rolex family of brands. With the Tudor Black Bay GMT (Ref. 79830RB), the subsidiary of the Geneva-based luxury watch manufacturer has produced a brilliant GMT watch that is also affordable.

Although it is missing the Cyclops lens above the date window, this watch still boasts a robust, three-link stainless steel bracelet, an automatic caliber, 41 mm case diameter, a blue-red bezel and a water resistance of up to 200 meters. All that has made this Tudor increasingly interesting as an everyday alternative. To top it all off, there is also the significantly lower price tag and the added option of a nylon or leather strap.


Just as the GMT-Master Collection is inseparably linked to the American airline Pan Am, the entire range of Breitling Navitimer models is also connected to aviation. Travellers and frequent fliers depend on the Navitimer 1 Chronograph GMT 46 to keep time in multiple time zones.

The Navitimer 1 Chronograph GMT 46 (Ref. A24322121B2X1) has the traditional Navitimer design and will appear familiar to any watch enthusiast. The 46 mm stainless steel case is fitted securely to the wrist by means of a black leather strap. This watch features the Navitimer's renowned slide rule bezel in white, which perfectly frames the black dial. The second time zone is located inside the central time display with 24-hour graduation and is read by means of a slim GMT hand. Moreover, the dial features a date window at 3 o'clock along with chronograph totalizers at 6, 9 and 12 o'clock. While it might raise some concerns that the 46 mm case will look too bulky, we find that the white slide rule bezel, black dial and black leather strap make the Navitimer look smaller than it actually is. The Breitling Navitimer and the Rolex GMT-Master II are two iconic watches from the same industry – be sure to check them out!


The Rolex GMT-Master II 126710BLNR in the spotlight

Tom Selleck demonstrated that it is possible to walk the red carpet with a GMT-Master on your wrist in his role as a private detective in "Magnum". The new Ref. 126710BLNR is no exception. Patrick Mahomes, quarterback for the Kansas City Chiefs, appeared after the team's Super Bowl victory in a white polo shirt, a 10.5-karat ring on his finger and a sporty, yet elegant Ref. 126710BLNR "Batgirl" on his wrist. Since Mahomes frequently wears watches by Rolex, it is no surprise that this model is a part of his collection.

About our Rolex GMT-Master II 126710BLNR