Rolex GMT-Master II
16710
Vintage or modern: The Pepsi is the classic of the GMT-Master II series
Discover More
Learn more about this watch 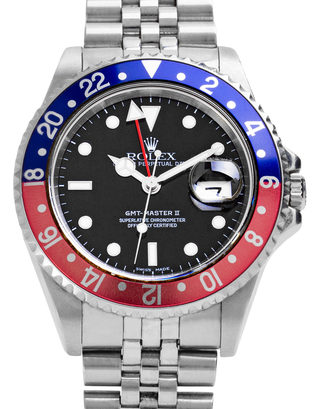 Customers Who Viewed This Rolex Watch Also Viewed
Discover Rolex
Rolex GMT-Master II
16710
Vintage or modern: The Pepsi is the classic of the GMT-Master II series

3 reasons to buy a Rolex Pepsi


The GMT-Master II Pepsi: Always in time thanks to Caliber 3185

Like all GMT models, the Pepsi also makes it possible to set up three different time zones in total. The 24-hour hand always indicates the second time zone to which you have set it before. By turning the rotating bezel to both sides, you can add a third time and read against the GMT hand. You should know that the date cannot be set with a quickset function and thus must be set separately from the time setting. The crown is also slightly smaller compared to the crown of the Submariner or Sea-Dweller.

Thanks to the Caliber 3185, the Rolex Pepsi runs perfectly smooth and even has the Caliber 3186 in the later transitional models of the Z series. The Caliber 3185 guarantees up to 40 hours power reserve and has been in the market since 1988. It is based on the Caliber 3135, which was one of the most solid movements of the last century. It is built with 31 jewels and has a rotor that can rotate in both directions and a balance wheel that oscillates with 28,800 bph.


A Rolex triumvirate in comparison

They are probably among the most popular models from Rolex. But whether you choose a Coke or a Pepsi depends on your own taste. However, the technical details are largely identical. The same applies to the two BLRO models. Of course, the 116719BLRO stands out because of the use of white gold. Its extremely short production time and thus low number of units also give the 116719BLRO additional collector's value. Those who prefer to invest in a less expensive Rolex Pepsi can do so with a second-hand 126710BLRO. A special detail of this Rolex model is the Jubilee bracelet, which is inspired by the bracelets of vintage sports watches. If you want to buy a Rolex Pepsi, it is therefore advisable to compare the older Rolex Pepsi models with the newer ones.

When buying a Rolex Pepsi, the price should not be neglected either, whereby this depends very much on the year of production. As you can see, the depreciation of the Rolex GMT-Master Pepsi is very low, which also makes it an interesting investment.


The history of the Pepsi bezel

Coke and Batman may have their supporters and defenders. But those who think of the classic GMT-Master might think in the first place of the legendary Pepsi bezel, which is connected to the series more than any other. It all began in 1954 with the first GMT-Master (ref. 6542), also known as Pussy Galore. At that time, the Pepsi bezel was still made of Bakelite. However, Bakelite was particularly fragile and was therefore replaced by aluminium in 1956. The Bakelite bezel was covered with radium, making it glow in the dark. After Bakelite was replaced by aluminium, the radium was no more used, so the bezel no longer glowed either.

From 1959 to 1980, the reference 1675 and its successor models ref. 16750 and 16700 followed. These made the Pepsi bezel the standard, although the model was also offered with a black bezel since 1972. Nevertheless, the origin of the combination of blue and red is controversial. It was assumed that it referred to Pan Am, who assigned Rolex to produce the GMT, but red is completely absent in the airline's logo. Meanwhile, the common assumption is that the colours simply symbolize the difference between day and night.

Rolex decided to update the series before any stagnation could set in and released the GMT-Master II Fat Lady in 1984. However, it was only available with the Coke bezel (red and black), probably to clearly distinguish it from the GMT-Master series which had the Pepsi bezel. The latter marked its triumphal return only in 1989 with the GMT-Master II ref. 16710. Unfortunately, it was just available for a limited time when Rolex decided to switch from aluminium to ceramic in 2007, which was something the two-colour Pepsi couldn't do in the first place.

Unlike the Coke, which is still waiting for a revival till today, the Pepsi has become such an integral part of the GMT-Master series that fans quickly campaigned for its reintroduction. Therefore, Rolex first offered a high-end alternative (ref. 116718) with a bezel of rubies and sapphires over a yellowish gold case. The breakthrough came in 2013 with the BLNR, which was endowed with a blue-black ceramic bezel. However, it was again designed as a luxury model and came with an 18-carat white gold case. It was not until 2018 that Rolex succeeded in manufacturing the bezel under conditions that allowed for larger production. The result is the GMT-Master II Pepsi 126710BLRO in stainless steel with a Jubilee bracelet.

Before Rolex switched to ceramics in 2007, the colours were simply applied. If the watches were exposed to UV rays for an extended period of time, the colours would be removed or faded more quickly. Is it bad? Not really. Collectors love a natural patina on their vintage watches because it helps to verify the age of the watch and has its own charm.

The problem with the use of ceramics is that the extreme temperatures. Even though they are needed for the sintering process, which contracts and hardens the ceramics, the light colours are also burnt. Sintering the ceramic at a low temperature leaves the colours intact, but risks the durability of the material. Hublot was the first company to demonstrate a red ceramic bezel as a proof of concept but it was still not ready for production. Rolex, on the other hand, already proved in 2013 with the BLNR that two-colour ceramic bezels were not only possible but could also be mass-produced.

Rolex patented the Cerachrom developed for this purpose. The Cerachrom bezels are extremely scratch-resistant and do not lose their colour even under the influence of UV sunlight. The surface is diamond polished and the 24-hour graduations are coated with a thin layer of platinum so that they do not lose their shine. For legibility in the dark, Chromalight is now used.