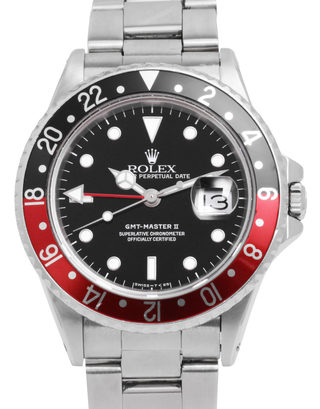 Even though Greenwich Mean Time (GMT) has existed since the 19th century, many countries did not recognize the existence of time zones until 1929. Even at this time, however, GMT time had no direct influence on horology. In those times, ships were mainly used for long distances, which gave the wearer enough time to adjust the time accordingly. Only with the advent of the airplane and the increasing number of intercontinental flights was there a specific reason to develop watches with two time zones.

While in production from 1983 to 1988, the Rolex 16760 is also known as the "Fat Lady" due to its roundness. The 13 mm case was slightly thicker than the previous models. Although these proportions also set the style for the subsequent models, they never reached the thickness of 13 mm again. Optically, the Ref. 16760 gave other important ideas: it was the first GMT-Master with a Coke-colored bezel that changed from acrylic to sapphire glass, with indices in white gold and the first to be equipped with the new caliber 3085.

The new caliber would be crucial. While the previous generation was able to display two time zones, the GMT hand was always connected to the central hour hand. The time adjustment was therefore made with the help of the rotating bezel. The new caliber 3085 enabled the two hands to be set independently of each other, thus actually displaying two different time zones on the dial. When the bezel was used, even a third time zone could be added.


An overview of the Rolex Fat Lady and its product family

After the Rolex Fat Lady (Ref. 16760) set the first visual trends, a series of newer models followed, which constantly developed these ideas further and interpreted them into their own stylistic language. The Ref. 16710 is still in great demand today – especially the models with a faded bezel sell at higher prices. Not your style? No problem. Starting in 2007, Rolex also began to outfit the GMT series and the Ref. 116710 with the well-established cerachrome bezels. The latest model, the Ref. 126710BLNR, launched in 2018, even comes standard with the popular Rolex Jubilee bracelet.

Compared to the Explorer II and the Tudor Black Bay GMT

The worst competition for the GMT-Master II (Ref. 16760) comes from a new edition: the Rolex Explorer II (Ref. 216570). This watch also features its own visual accents with the orange GMT hand and snow-white dial. This model's bezel is also made of aluminum, but with the caliber 3185 it contains the update of the caliber 3085. This model is priced between about € 7,600 and € 8,300, while the Rolex Fat Lady is usually only available starting from a price of € 13,300.

Naturally, a legend also attracts copies. In particular, the Coke and later the Pepsi bezels were often copied, as in the case of the TAG Heuer Aquaracer GMT. Tudor, Rolex' subsidiary, offers the Tudor Black Bay GMT (Ref. 79830RB), which is nearly a twin visually for an unbeatable price of € 4,170. However, the caliber MT5652 is utilized for the movement, which has a power reserve of about 70 hours.

There is, as always, also a nickname for the Ref. 16760. The model received its nickname from the Italian actress Sophia Loren, who became famous mainly through her collaborations with Vittorio De Sica. She became known to the US audience mainly through the movies "Houseboat" (1958) with Cary Grant and "It Started In Naples" (1960) alongside Clark Gable. Rolex enthusiasts quickly drew parallels between Sophia Loren and the Ref. 16760 rooted in sweeping curves, iconic fashion and coveted beauty.