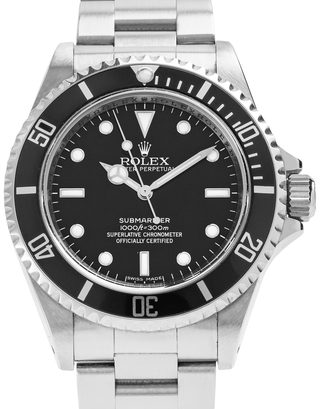 Rolex already has an illustrious history and just as world history has witnessed with various species, the traditional watchmakers have seen some models come and go. In 2011, the Rolex Submariner 14060M was met with this fate. It was considered to be the bridge between the vintage Submariner watches and the modern Rolex timepieces. For many fans the era of the classic, sporty Submariner ended when production of this model stopped. Thus, some collectors refer to the Rolex 14060M as “The Last of the Best”.

Today’s references are in no way inferior to a vintage Submariner in quality and style. On the contrary: Rolex continues to make even more improvements to their technically outstanding timepieces. Whether it was the introduction of scratch-resistant sapphire crystal in the 70s or the bidirectional rotating bezel in the 80s, standing still has never been an option. The movements used also undergo constant development to improve their accuracy and robustness. In 2007, the Calibre 3130 of the 14060M achieved certified chronometer status, which is marked by two additional lines of text on the dial. Yet, because some models define certain periods in the world of watches, many watch lovers get used to them. What others perceive as a blemish, they may appreciate and decide that they no longer want to miss out on such iconic characteristic features. On the Submariner 14060M it was a question of the aluminium bezel. This particular feature was used for the last time on the 14060M. Although the Cerachrom bezels used today are practically indestructible, they don’t acquire a patina over time. But this aged appearance, caused for example by the sun and sea water on a worn Submariner 14060M, are exactly the type of marks made over time that a Rolex collector appreciates so much on a Submariner.


Technical and visual features of the 14060M

Since its launch the Submariner series has been characterised by a clearly discernible design language. Nevertheless, there are some specific details and features for each version. Naturally, these also affect the price of a Submariner 14060M. If you buy a Submariner 14060M you will own one of the last models with drilled through lug holes and a stamped bracelet clasp. In addition, the end links are stamped, and the bezel also has an aluminium insert. All these features are characteristic of the original Submariner models from the 1960s. In the early 1950s the date display was introduced on the Submariner and with it came the Cyclops magnifying window, which has since divided the Rolex enthusiasts into two irreconcilable camps.

For purists, the Rolex Submariner 14060M is therefore the ideal model choice. The absence of a date display and cyclops magnifying window give the watch's dial an appealing symmetrical appearance. In addition, the winding crown even has the ideal size to be operated even when wearing gloves. However, the crown protector is still subtle enough. The 14060M also features detailing with above-average luminosity and a power reserve of 48 hours. The unobtrusive 40 mm case diameter means that the Submariner 14060M is well-proportioned and thus offers a corresponding effect on the wrist of the wearer. However, in contrast to the new models, the 14060M has a very slim profile and you won't have any problems if you want to wear the watch under a shirt.


Comparison of the Rolex 14060M and other model references

If you are looking for an affordable Submariner 14060M, then you should have a look at pre-owned models that were produced before 2007. The aluminium bezels, which were used up until then, give the watch a sporty, robust character and are also a feature that makes the 14060M a much sought-after collector’s item. Evidently a pre-owned Rolex 14060M is a very worthwhile investment.

In 2007, the Rolex Submariner 14060M received official chronometer certification. In addition, buyers of this Submariner 14060M model got a watch with a four-lined dial instead of the two-lined one. However, very observant collectors noticed a small detail in some models. This fine detail refers to the water resistance specification, which is indicated on the dial by “1000 ft = 300 m”. On some chronometer-certified models of the 14060M, the “f”, which is usually in straight font in line with the rest of the text, is long and curved here. Under the name “LGF” (Long Good F), this special feature created a bit of hype around the 14060M. It turned out that Rolex used the long and curved “f” of the old two-line models for a short period of time after changing to the four-line models.

Finding one of these rare Submariner 14060M models could prove difficult as very few watches were made with this special typography. But who knows, maybe you will be lucky and come across a pre-owned Submariner 14060M with this small yet distinguished detail. As production stopped back in 2011, you can now only buy a second-hand 14060M.

About our Rolex Submariner 14060M