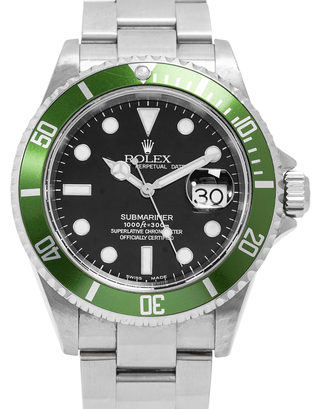 The Oyster Perpetual Submariner Date 50th Anniversary Edition, which is the actual full name of the Rolex Submariner 16610LV "Kermit", is a historically important transitional model. As a blueprint for the younger Submariner models, it sets several stylistic exclamation marks such as the green aluminium bezel and at the same time it looks back on the history of the series. The Submariner was launched in 1953, when René-Paul Jeanneret dreamed of a diver's watch that could also be worn with a suit. Anyhow, the water-resistant Oyster case with its screw-down crown and automatic winding system goes back to the president and Rolex founder, Hans Wilsdorf, and is still the heart of every Submariner today. Thanks to targeted sponsoring, for instance Auguste Piccard's deep-sea dive, the Submariner was presented to the general public and quickly became a bestseller. Special editions, changes of calibre and technical and optical updates such as sapphire crystal glasses, a unidirectional rotating bezel and Rolesor models followed over the next decades. The Submariner has never lost its endurance, precision and luxurious finishing.

3 Reasons to buy a Rolex Kermit

If you look back at a little more than 15 years, you can say that the "Kermit" has aged with great style and adopted the best stylistic impulses of the 2000s. Much of what would later become excess is only indicated here. The green bezel and slimmer case harmonize beautifully with the voluminous dial, soon to be known as the Maxi Dial. The "Kermit" doesn't come with a supercase and is therefore perfect for smaller wrists. Also, the Rehaut with the Rolex-engraving has been eliminated, which should also become standard for future Submariner models.

The bracelet already has the fixed bridge parts, but still relies on the Fliplock Extension System, which has been replaced in the newer models by the more flexible Glidelock System. In the interior beats the caliber 3135 with 31 jewels and automatic movement, which is the standard in the Submariner since 1988. Similar to the GMT-Master, Rolex now also focused on exclusivity for the Submariner series with the "Kermit" and produced models with coloured bezels and small numbers of pieces.

What does a Rolex Submariner 16610LV cost? Rolex nicknames and their prices

As many know, long names and blown reference numbers can make discussions about watches extremely difficult. That's why many nicknames have evolved over the years that make it easier to separate models. The "Kermit" is already available as a pre-owned model at a low price of 13.090€, which sets the watch at the lower end of the range of these coveted collectibles. If you're looking for a bargain, the Rolex Turn-O-Graph 16263 is the right choice.

In 2010 the manufacture of the Kermit was discontinued and replaced by the Rolex 116610LV Hulk, which had a green dial in addition to the green bezel of the Kermit. Over the years, both models have found an enthusiastic fan base, so prices for a used Rolex 16610LV "Kermit" are slightly higher than for a new Rolex "Hulk".

About our Rolex Submariner 16610LV