A German manufacture that surpasses some of the Swiss watchmakers: A. Lange & Söhne stands for outstanding quality as it does for tradition.  More 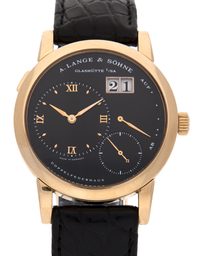 Sell your A. Lange & Söhne 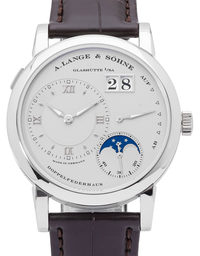 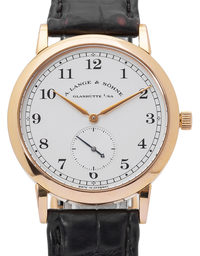 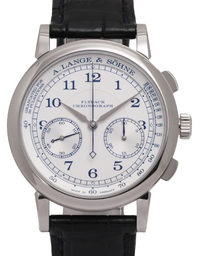 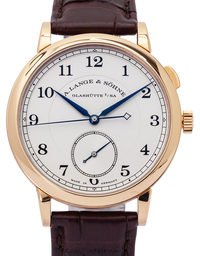 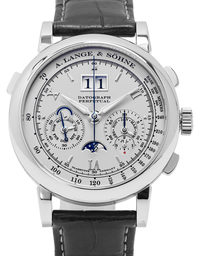 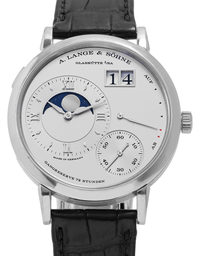 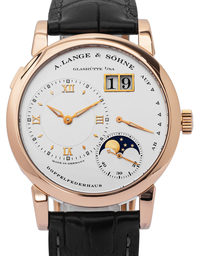 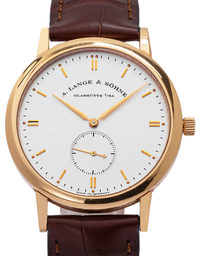 The fastest way: Finance your A. Lange & Söhne watch


An affordable A. Lange & Sohne watch is hard to find. But among the numerous certified, pre-owned A. Lange & Söhne luxury watches in the online shop of Watchmaster also models of the German luxury brand are represented. These can then conveniently be purchased by credit card, PayPal or by bank transfer. Alternatively, Watchmaster offers you favourable financing options for your desired A. Lange & Söhne watch. Create your own instalment plan during the order process. Determine the duration and amount of the down payment yourself and expect your watch with best regards from Berlin in just a few days.

5 reasons why you should buy an A. Lange & Söhne watch 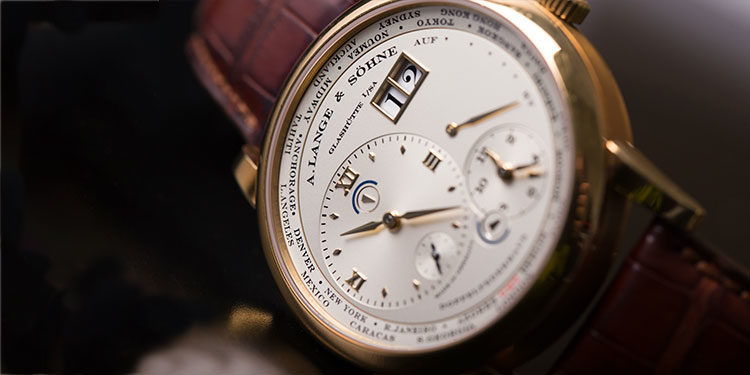 A. Lange & Söhne series and prices

The A. Lange & Söhne Lange 1 collection has been the key model of the manufacturer since its launch in 1994. Currently, the watch family includes twelve model variants. The design of the classic Lange 1 has remained widely unchanged since then, the decentralised time display is striking. In addition, it offers a small second with a second stop and an indicator for up to 72 hours of power reserve. The mandatory big date display is at two o'clock, which is jumping since the second generation. This makes it easy to read the date at any time. The timepiece is powered by the manufacture calibre L121.1. The models in the collection are 38.5 mm wide and available in platinum, red gold, yellow gold or white gold.


The Lange 1 Time Zone is part of the Lange 1 family and can determine the current time for all 24 time zones of the world parallel to the home time. Its case diameter is almost 42 mm, it is currently available only in platinum, rose gold or white gold.


With the A. Lange & Söhne Saxonia Collection, the company presents a prime example of harmonious dial design. The models are reduced to the essentials, namely hour and minute, plus small seconds with a stop second. The true beauty lies in the details, all of which have been perfected. Design accents and a smaller case emphasise their stylish appearance. The current Saxonia collection consists of 19 different variants, with the L941.1 manufacture calibre is ticking inside.

Aware of its own origins, A. Lange & Söhne dedicated the 1815 Collection to the founder of the family business. Based on the year of birth of Ferdinand A. Langes, the timepiece is equipped with traditional features: blued hands, Arabic numerals and the minute scale in the "Chemin de fer" style make the homage perfect. In addition to hour and minute, there is also a small second with a stop on the dial. The power reserve is 55 hours, in it works the manufacture calibre L051.1. Eleven other model variants characterise the family. 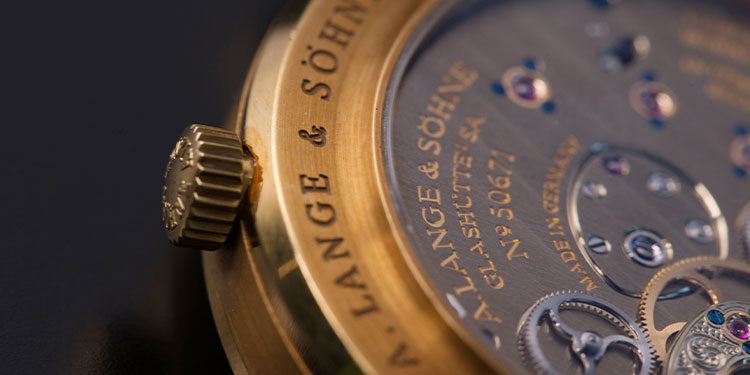 
The collection A. Lange & Söhne Richard Lange builds on the scientific observation clocks of the 20th century. The highest precision and best possible readability are the focus. The timepiece is therefore reduced to hour, minute and seconds, whereby the time can be read accurately to the sixth of a second thanks to the manufacture calibre L041.2. The watch was dedicated to the son of the founder, thanks to him the company gained worldwide recognition before it was even sold internationally. The current collection comprises a total of five models.

With the A. Lange & Söhne Zeitwerk, the company proves its visionary spirit. The model Zeitwerk Minute Repetition is the first mechanical watch with a jump-digit display and a decimal minute repeater. A dial in the traditional sense, so you look in vain, instead, the hours are displayed at nine o'clock and the minutes in a kind of date window. At six o'clock, there is a small second with a stop-second and the power reserve indicator of up to 36 hours is at twelve o'clock. The extraordinary watch is kept in motion by the manufacture calibre L043.5, which consists of an incredible 771 parts and 93 jewels. The collection Zeitwerk consists of four more models, which are no less interesting.

Buying an A. Lange & Söhne watch as an investment?

Many people are looking for alternative ways to invest money. Especially in a time of low-interest rates, options are very welcome. It is not so long ago that the luxury watch market has come into the limelight. Because it is true, with the right watch there can be achieved under certain circumstances, high profits. But which model is the right watch?

We can not answer that question straight away. But we can give you a few hints on what to look out for when buying a watch for investment reasons. On the one hand, the reputation of the manufacturer is crucial; a brand like A. Lange & Söhne with its rank, name and above all, a long tradition holds great potential. The location of the manufactory makes a difference. Even though the materials in Switzerland are the same as in Germany due to globalization, Switzerland is still regarded as a horological Mecca and symbolically stands for the highest quality. Brands from Switzerland often have an advantage in value preservation, but exceptions confirm the rule! A German brand like A. Lange & Söhne is in no way inferior to well-known manufacturers. In addition, the condition of a model is crucial, especially vintage watches can be good investments – if they are well preserved. On the other hand, the number of pieces produced is of great importance. The fewer models in circulation, the higher the prices can be. Finally, the watch should be different from others. Be it through special functions or advertisements, in view of the future, such complications are a tremendous opportunity for value creation. Vintage A. Lange & Söhne watches meet these criteria. Surely A. Lange & Söhne is not cheap, but in the future, the popular timepieces could turn out at a much higher price. Whatever one ultimately decides, thorough research should be a prerequisite for the purchase decision. 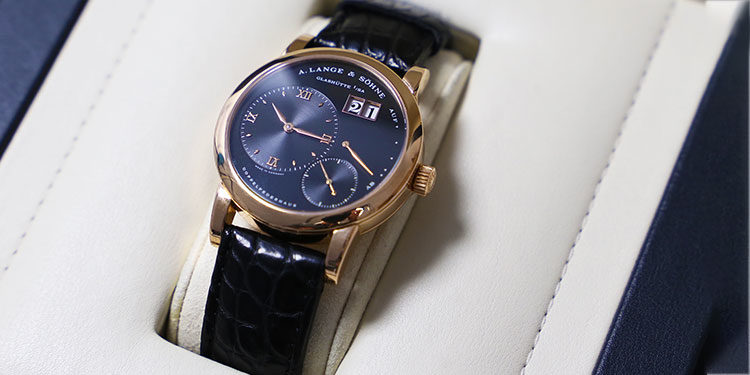 The founding of the A. Lange & Söhne manufacture dates back to 1845 – and in 1990. Yes, you've read correctly. The company wrote a success story with a temporary interruption. But let's start from the beginning. We look back at the year 1845, when Ferdinand Adolph Lange founded in Glashütte, the manufactory "A. Lange & Cie". He laid not only the cornerstone of today's luxury watch manufacturer, but also the Glashütte watch industry in general. In 1868, the two oldest sons of the founder joined the company, which was then renamed A. Lange & Söhne. After initial difficulties, in 1875 the company had already over 70 employees and was considered an impetus for the development of the structurally weak Saxon village in the Erzgebirge. Glashütte soon became the german watchmaking equivalent to Switzerland with its well-known manufacturers. Under the leadership of sons Richard and Emil Lange, the company achieved worldwide renown and successfully existed until 1948 before being expropriated by the Soviet occupying forces. Manufacturer A. Lange & Söhne was 103 years old at the time and had already received more than 30 watch patents, including the use of a beryllium alloy for the manufacture of balance springs. Through this process, the inhibition of a watch gains elasticity. This approach is used until today and was taken over in the whole watch industry worldwide. During the existence of the GDR, seven of the watch factories in Glashütte were nationalised and combined into the state-owned enterprise "VEB Glashütter Uhrenbetriebe (GUB)".


After the reunification of Germany, two things emerged: The GUB became the "Glashütter Uhrenbetrieb GmbH" in 1993, as we know the brand today. December 7 1990 the great-grandson Walter Lange founded the new watch manufacturer "Lange Uhren GmbH" in Glashütte. He acquired the rights of the name A. Lange & Söhne and brought the family business back to life. Once again, the company struggled with considerable teething problems, because W. Lange had literally nothing. No watch in stock, no staff and no premises for production. Fortunately, the paths of Walter Lange and Günter Blümlein crossed: The businessman was responsible for the watch brands IWC and Jaeger-LeCoultre at this time. Blümlein recognised the potential, knew about the tradition of the company. Thanks to his network, 48 newly hired employees of A. Lange & Söhne had been made familiar, in the halls of IWC, with modern production methods. The family business was back on track. As early as 1994, four new watch models were presented. They were a sensation throughout the industry and consolidated the position of the traditional manufactory. Today, in the appearance of the A. Lange & Söhne models, we recognise one thing above all else: the ideas and ideals of the founder Ferdinand A. Lange. True to the tradition, the timepieces are witnesses of their time. Mechanical pieces of art with refined components of excellent craftsmanship.

What's so extraordinary about it? Partly in order to tie in with one's own history, partly because good is not good enough, each individual watch is assembled twice at A. Lange & Söhne. Because after successful initial assembly, the functionality of the watch is checked, then it is completely disassembled and each part is refined. Then the final assembly takes place. Another unmistakable trademark of the manufactory is the patented big date. Unlike most date displays, A. Lange & Söhne presents the display three times larger than others, with two independent dials instead of one with 31 numbers. The large date display can be traced back to the teacher of the former founder Ferdinand A. Lange, Friedrich Gutkaes. He built the stage clock of the Dresden Semperoper, in which the principle of the two dials was rediscovered early on.

The philosophy of A. Lange & Söhne

Since the early beginnings in the 19th century, the German company set the highest attention onto highly precise work, combined with sophisticated style. However, the company, which was named the most important German luxury brand in 2007, is also working on the continuous development and improvement of watches, so the company philosophy is based strictly on the highest quality. Here the demands are extremely high, because the models of A. Lange & Söhne play in the top league of watchmaking – the manufactory faces this challenge and even surpasses it. The title as the most important German luxury brand is, therefore, more than justified.