With the Lange 1, A. Lange & Söhne celebrated its renaissance and laid the foundations for another successful chapter in its company history.  More 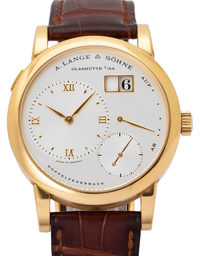 Lange 1: A combination of the future and tradition

Design of the Lange 1 by A. Lange & Söhne


With its iconic design, which has won over both critics and fans, Lange 1 by A. Lange & Söhne has secured its place in luxury watch history. The off-centre dial was developed to ensure maximum readability. None of the displays are laid over one another and all of the elements together form the shape of an isosceles triangle.

Another outstanding feature is the large date display at 1 o'clock. The design is based on the famous five-minute clock in Dresden's Semper Opera House and represents a notable feature of the Lange 1 due to its large size – a characteristic evident in the design of other A. Lange & Söhne watches. The display area is split up and is moved by standalone components. At midnight, the display changes at lightning speed thanks to the instant date change function. Other functions of the Lange 1 are a small seconds dial with stop-seconds and a power reserve indicator.


The ingenious technology of the Lange 1


The Lange 1 movement is an in-house creation by A. Lange & Söhne – the Calibre L901.0. Thanks to the Nivarox-1 hairspring built into the screw balance, it offers a high level of accuracy and can be seen working away through the watch's transparent glass back. The 53 synthetic rubies reduce friction in the movement to a minimum. The calibre is hand-wound and has a power reserve of 72 hours. At 39 mm, the Lange 1 has the perfect dimensions for a dress watch that will make for a classy impression. The bracelet is made of high-quality crocodile leather and is fastened by a yellow gold pin buckle to match the case.

Founded in the prestigious watchmaking town of Glashütte, A. Lange & Söhne approach new innovations with caution. This may be because the Lange 1 already set the standard for fine luxury watches when it was introduced in the 90s and that this technology still has plenty to offer. So, if you are considering investing in a pre-owned Lange 1, rest assured that you are buying a timepiece that will never go out of fashion thanks to its classic style.


How much does a pre-owned Lange 1 watch cost?

The Lange 1 is one of the most sought-after watch models from Germany. This is due to their high-precision workmanship and the large number of components that are in A. Lange & Söhne watches which make them a technical and aesthetic masterpiece. If you would like to buy a pre-owned Lange 1, we recommend the following models:

The story of a new beginning


Germany has been reunified for over 30 years. This historic godsend also had a major impact on the German watch industry. With the re-establishment of A. Lange & Söhne, Walter Lange, the great-grandson of the company founder Ferdinand Adolph Lange, made a long-standing dream come true. This key moment was celebrated with a watch that seamlessly followed on from the quality of the former timepieces made by A. Lange & Söhne. The Lange 1 was presented in 1994 together with three other models by A. Lange & Söhne subsequently exceeded the expectations of Walter Lange. In 1995 and 1997, the Lange 1 was named watch of the year by the German newspaper “Welt am Sonntag” and the watch magazine “Armbanduhren”.

Since A. Lange & Söhne focuses on quality and stability when crafting its timepieces and isn’t afraid of investing time in development before making changes to existing models, the company built strong foundations from which many variations of the Lange 1 have been created.


Other interesting series from A. Lange & Söhne