The company started as a rebel and quickly took wrists of many celebrities by storm: The Audemars Piguet Royal Oak. It is known for understatement, sportiness and luxury, and within a few years it has become an absolute classic among luxury watches.  More 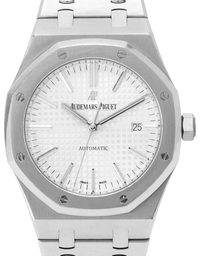 Do you want to buy a Audemars Piguet Royal Oak watch? Then you are exactly in the right place with Watchmaster as a dealer for certified and second-hand luxury watches. Timepieces of the Audemars Piguet brand are always present in our online shop, especially the Royal Oak as the most popular series of the manufactory. We offer pre-owned Royal Oak watches at low prices.
After choosing your model, you have different options for direct payment. Alternatively, you can finance your Audemars Piguet Royal Oak – specify the duration of the installments and the deposit amount individually so you can expect your new timepiece in a few days via insured shipping. 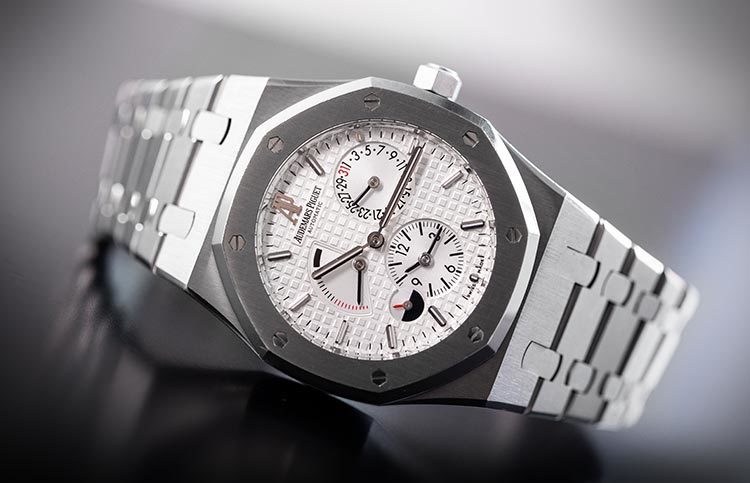 What makes the Audemars Piguet Royal Oak so special?

The most striking feature of the legendary collection is the octagonal bezel, which is attached to the case with eight hexagonal bolts, as well as the bracelet which is integrated into the case. The design idea comes from the connection between a diving helmet and a diving suit with its rubber gaskets and bolts from past decades. The lunette shape is so characteristic that Audemars Piguet now offers octagonal cufflinks with the eight screws in its accessories collection. The case itself is extremely comfortable and aesthetically pleasing. This can be attributed to the highly technical production process. Even today the luxury timepieces of Audemars Piguet are still produced in traditional handcraft. The case merges seamlessly into an interestingly designed steel bracelet, whose links become ever narrower towards the deployment clasp. A Royal Oak can be identified by its dial as well as on the striking bezel. The pattern on the dial is known as Hufnagel pattern, tapestry, Clous de Paris or the guilloche dial. The production of the same goes hand in hand with incredibly elaborate work.

Inside the Royal Oak ticked first the caliber 920 made by Jaeger-LeCoultre. It includes a date display and yet measures only an incredible 3.05 mm in height. Audemars Piguet called the movement 2121 in the Royal Oak. In 2005, the Royal Oak (ref. 15300ST) will be fitted with its own movement for the first time. The new manufacture caliber 3120 now also has a seconds display, but is also 4.26 mm high. Over the years, the Royal Oak has established itself in various designs, in a rather large collection, it is now equipped with various movements.

The current collection of the Royal Oak

The current collection of the Audemars Piguet Royal Oak comprises a total of 108 model variants. Through various complications such as chronograph, perpetual calendar, second time zone, tourbillon, equation of time or Grande Complication with minute repetition and chronograph comes a diversity that is second to none.

Also, the available materials and bracelets as well as the available colors of the dials contribute to the sprawling offer. After the story began with stainless steel, the Royal Oak is now available in white, red and yellow gold, platinum or tantalum. Although this contradicts the original idea of ​​understatement, it is the result of increased customer requirements. The case sizes range from 33 mm to 44 mm in diameter. The bracelets are made of leather or all materials from which the case is made. All this in various colors, so suddenly 108 different models do not seem so utopian anymore. 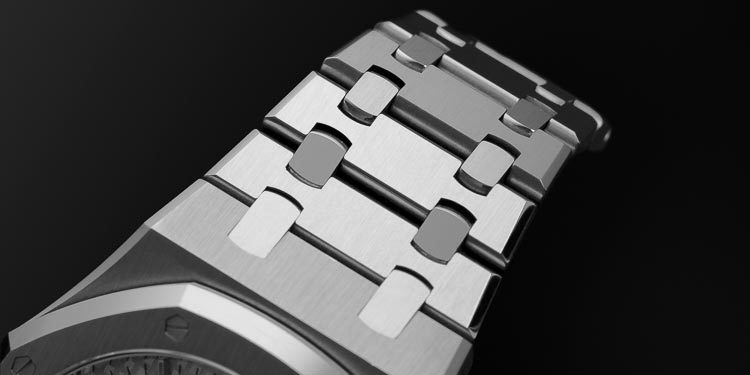 
The Royal Oak prices are sometimes very high. The more complications a model has, the more expensive it gets. Since the second-hand market offers really a few alternatives. You do not buy the latest Audemars Piguet, but you can save a lot. In Watchmaster's online shop you can always discover a few models of the popular brand, for example, the 37 mm Royal Oak (ref. 15451ST.ZZ.D011CR.01). It comes from the year 2012 and is for sale including the original box and papers for only € 14,300. Its bezel is set with 40 diamonds and the case is made of stainless steel. Its appearance is rounded off by a white crocodile leather strap. Unlike the Royal Oak (ref. 56175TR.OO.0789TR.01), its case is made of tantalum, the bezel and applications in the rose gold bracelet. It comes from the year 1996 and costs in very good condition only € 4,880 thanks to its previous owners.

Royal Oak watches are popular from Hollywood to Argentina

After the Audemars Piguet Royal Oak quickly built up a fanbase, the world of stars and starlets became aware of it. The Hollywood star Arnold Schwarzenegger contributed significantly to the development of the larger and more complex Royal Oak Offshore. On the occasion of the film "Terminator 3" (2003), he and Audemars Piguet together developed the 52.5mm Royal Oak Offshore T3 Chronograph. Due to its size, the model is nicknamed "The Beast".

Also, Muhammad Ali, Patrick Dempsey and Kim Kardashian are often seen with the popular model. In fact, the brand is generally very popular with celebrities, so it is hardly surprising that some stars are also the official brand ambassadors of Audemars Piguet. Lionel Messi, LeBron James and Jay-Z worked together with the company to create elaborate special editions of the Royal Oak. 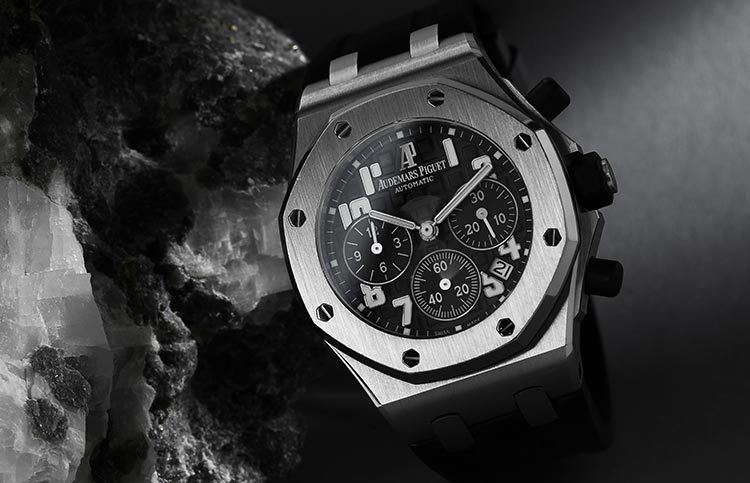 The Royal Oak from Audemars: A Rebellion

We write the year 1972 and Georges Golay is in charge of Audemars Piguet. He is a businessman by heart and soul and willing to take over risks. The entire watch market is flooded at that time by inexpensive quartz watches from the Far East, the so-called quartz crisis is in full effect. In this year, the Italian agent Carlo di Marchi asks the thoroughbred merchant for a wristwatch that should be as versatile as possible. He asks for a timepiece that cuts a fine figure in both – sports car and the evening suit, case and bracelet should be made of steel.

Golay accepts the challenge and once again proves his willingness to take over risks – launching a luxury watch completely made of steel in the midst of the quartz crisis is a daring undertaking. Especially since the new timepiece will cost more than most full gold watches at that time. Legend has it that Golay called for his chief designer, the great Gérald Genta on one evening, and he developed the even today distinctive design of the Royal Oak overnight.

Since most of the luxury timepieces at the time were small and made of gold, the Royal Oak was perceived as a rebel against prevalent conventions. It immediately came into the limelight and was fiercely debated by critics. But Audemars Piguet, contrary to public opinion, can assert itself and introduces a revolutionary, avant-garde style with its powerful look. Demand soared and the skeptics fell silent. Instead of the planned one thousand specimens, several thousand were produced over time. The Audemars Piguet Royal Oak has become an iconic item and is now considered one of the most famous models in the high-end luxury watch segment.