With the Capeland, Baume & Mercier have created an elegant dress watch, which offers many useful functions as well as an elegant appearance.  More 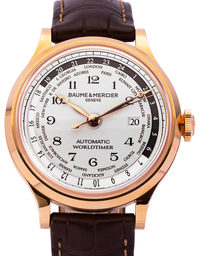 Only the bravest seafarers dared to sail around the most dangerous capes. With its Capeland series, Baume & Mercier has created a tribute to the myth of the rugged mountain coastlines. With their various measuring functions such as telemeter and tachymeter, the Baume & Mercier Capeland models are reminiscent of the old measuring instruments that explorers once journeyed the world with. Indeed, it is the company's own history that comes to light in the Capeland series. Having gained an excellent reputation as a manufacturer of elegant dress watches up until the 1960s, it finally turned its attention to more experimental case designs. When Baume & Mercier reissued the Capeland in 2011, they also sparked a renaissance of their popular style.

A veritable all-rounder with finesse


One thing’s for sure: the Baume & Mercier Capeland is definitely no lightweight. With a rather stately case diameter of 42 to 44 mm and a height of 15 to 16 mm, the models from this series sit prominently on the wrist. While these dimensions are rather imposing at first, perhaps even a little intimidating, this shouldn’t stop you from checking out the models on offer.

On closer inspection of the Baume & Mercier Capeland watches, you quickly realise just how skilfully the Swiss watchmaker has defined the design of the model, thus presenting a harmonious and balanced overall concept for the Capeland series. The curved sapphire crystal case back allows the Capeland to rest comfortably on your wrist, while the tapered bezel ensures that the watch also fits well under a suit shirt. This triumphant balance is the major strength of Capeland. It ticks all the boxes with functional tool watch elements, but these don’t detract from the fact that the watch also makes for a stylish dress watch for the office. Unlike many other Baume & Mercier models, the dial is highly detailed. Nevertheless, the watch still offers a clear layout due to its well-proportioned hands and Arabic numerals.

In particular, the tachymeter and telemeter scale on the outer ring of the dial are particularly practical. With these scales you can measure the speed of a moving object and the distance between two points. There is also a date display located between 4 and 5 o'clock.


The required power for the many extra complications comes from a refined ETA 7753 movement. It has a power reserve of around 44 hours and works at a rate of 28,800 vibrations per hour. Unlike the classic ETA-Valjoux 7750, the totalisers of the Capeland watches are in the classic Tri-Compax arrangement due to the calibre 7753. Although the water-resistance is relatively low at 50 metres, it is more than enough for the Baume & Mercier Capeland to cope with a rain shower.

If you are looking for a versatile watch that you can wear to different occasions, then you should consider buying a pre-owned Capeland watch. The undeniable strong point of the Capeland series is that it delivers on both the important and popular aspects of a tool and dress watch.

Although Baume & Mercier is known for its accessible prices, Capeland watches are in the upper price range due to their many additional features. However, if you decide to buy a pre-owned model, you can find a Baume & Mercier Capeland for a reasonable price. We have put together some exciting models below to give you an overview:


Other interesting series from Baume & Mercier