The Baume & Mercier Clifton revamps classic wristwatches without losing sight of the features that matter most. Discover the diversity of the Clifton series!  More 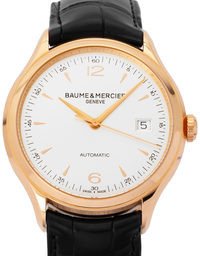 In 1918, William Baume and Paul Mercier founded the Baume & Mercier company on the basis of the “Frères Baume” watch manufactory that had been established since 1830. Since then, the classic design language of the watches was met with widespread approval and culminated in the Clifton series. With elegant round cases and clearly arranged dials, the diverse models in the Baume & Mercier Clifton series range from sporty chronographs to elegant dress watches.


Visual and technical features of the Clifton

Since it was established, Baume & Mercier's desire to produce timepieces of outstanding quality has been more than fulfilled in the Clifton watch series. Whether as a model with a quartz movement or with the new, in-house Baumatic automatic calibre, the Clifton combines highly intricate complications with classic understated style.

The case of the Clifton is always round in shape, made of steel, bronze or rose gold and is usually attached to the wrist by a steel or leather strap. However, Baume & Mercier also offers a sporty version of the Clifton with a rubber strap if you prefer this style. The complications in the Clifton series range from simple three-handed watches to GMT functions, moonphase displays and date windows, as well as classic chronographs. This means that the Clifton has the ability to adapt without fail to the wearer's environment and to be useful in every situation.

In addition, the Clifton collection has recently split into two product lines. One line is called the “Clifton Club” and includes the sportier watches from the collection, while the second line is known as the “Clifton Baumatic”, which is equipped with the first “Baumatic” calibre that was specially developed in-house by Baume & Mercier and is COSC certified. This new calibre beats at a frequency of 28,800 Vph/ 4 Hz, providing impeccable precision that can be admired through the sapphire crystal case back.


Baume & Mercier & Me and the Clifton in the spotlight

It’s a well-known fact that luxury watchmakers are also involved in other fields such as sport and art. In addition, it’s not uncommon anymore for some manufacturers to get involved in charity projects. Looking to make a positive impact, Baume & Mercier also launched a campaign with celebrities to raise funds for charity through the campaign “Baume & Mercier & Me”. Celebrities who have participated in this campaign over the years include Evangeline Lilly, David Duchovny, Andy Garcia and Ashton Kutcher. Another Hollywood star, Chinese actor Chen Hun, went even further and became a brand ambassador for Baume & Mercier, wearing an elegant model of the Clifton series on his wrist at a launch event.


Other exciting series from Baume & Mercier