The oldest watch brand in the world convinces even today by elegance and the highest art in watchmaking. Numerous complications adorn the noble timepieces and reflect the love of tradition and innovation.  More 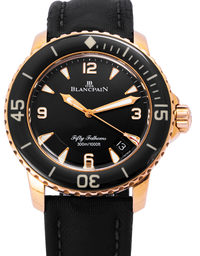 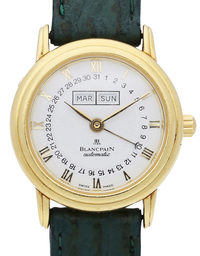 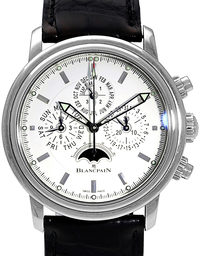 If you want to buy a certified pre-owned Blancpain watch and wear it on your wrist as fast as possible, we then offer you numerous possibilities to send you your new favourite timepieces piece right away. You can easily pay with your credit card or PayPal. If you prefer to plan on the longer term, a purchase on instalments is also possible. Just call our client advisors to finance your Blancpain watch, customized to your needs.


5 reasons to buy a Blancpain watch

The most popular collections – Blancpain models and prices


A pre-owned Blancpain watch as an investment?

First things first – an increase in value is impossible! Nevertheless, one can make recommendations based on certain characteristics and experience. Blancpain has an impressive, long-standing history with excellent innovation. The watches speak for themselves in design and craftsmanship. Investing in a used Blancpain watch could be a great opportunity to make a cheap investment.


The history of the oldest watch brand of the world

As early as 1735, the watchmaker Jehan-Jacques Blancpain founded the company of the same name and so created the oldest watch brand in the world. In his house in Villeret in the Bernese Jura in Switzerland, he built himself a small workshop. This brought great success in the first years. Blancpain saw watchmaking as an art, which the customers of his company appreciated. It was not until 1815, when the great-grandson Frédéric-Louis Blancpain took over the management. The workshop was converted to a production on an industrial scale. In the mid-19th century, Blancpain was Villeret's strongest company. Watchmaking was highly regarded and highly appreciated by wealthy families. In the second half of the 19th century, however, this changed abruptly in the course of industrialization. Cheaper American products flooded the watch market, forcing many small businesses to file for bankruptcy. Blancpain, however, did not give up and moved with a two-story factory to the Suze river, where they could use the hydropower as an energy supply on low-costs. With this thoughtful move, the company survived as one of the few in Villeret.

However, Blancpain was not satisfied with the title of the "first watch brand in the world". In 1926, it produced together with the inventor and watchmaker John Harwood, the first automatic wristwatch in the world. Four years later, the rectangular "Rolls" was launched: The first automatic ladies' watch worldwide.
For more than two hundred years, the watch manufacturer was a family-owned company. In 1932, the last descendant, Berthe-Nellie Blancpain, decided against watchmaking and her father's two closest associates took over the company. According to the then laws, the name Blancpain was no longer allowed to make out the name of the company and so the new name "Rayville S.A., succ. de Blancpain". Despite new brand names, the new directors, Betty Fiechter and André Léal, retained the company's characteristics and philosophies. Thus, the customers were preserved, moreover, through the new influences, the brand gained more and more reputation. Noteworthy models included the 1953 launched "Fifty Fathoms". The watch was designed for French Army fighters who needed a reliable, extremely durable timepiece. This success was repeated three years later when the currently smallest, round ladies' watch "Ladybird" was presented. In response to the growing demand, Rayville-Blancpain joined the Société Suisse pour l'Industrie Horlogère (SSIH) in the late 1950s. This group also included major brands such as Omega, Tissot and Lemania. Like every success story, Blancpain's has setbacks. In the 1970s, there were several issues such as the oil crisis in 1973 and the launch of the quartz watches, which halved prices in production. The SSIH was forced to surrender all the trademark rights and in 1983 handed over the company to the young watchmaker Jacques Piguet. Under his leadership, the company was continued as Blancpain SA.

So far, Blancpain's excellent movements have mostly been hidden inside other well-known watches. Piguet prompted that the produced calibres should now be used only for watches branded with the own name. The new models were designed with innovation in mind, but also reflect the considerable tradition. Complicated complications recurred, reviving mechanical watchmaking. The watch "1735" was a tribute to the legendary founding year and was the most complicated watch in the world to the date of its publication. Numerous complications adorn the Blancpain 1735and perfectly reflect the entrepreneurial spirit of the founder Jehan-Jacques Blancpain.