Robust, distinctive and masculine: Journey back to the creation of the Avenger series with the Avenger Skyland and experience the beginning of a legend.  More 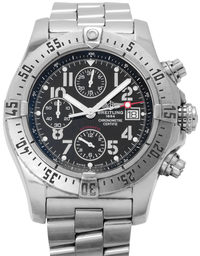 Have you already decided on a pre-owned model from the Breitling Avenger Skyland series? Then don’t wait any longer and secure your new dream watch now. At Watchmaster you can either pay directly via PayPal, by credit card, by instant bank transfer or you can choose to pay on finance with one of our partner companies. Whichever option you choose, it won’t be long before you are holding your Avenger Skyland watch in your hands.

Technical and visual features of the Avenger Skyland

The Breitling Avenger Skyland is available in two different styles: The regular version (Ref. A13380) is made of stainless steel, while the special limited edition of 2,000 pieces (Ref. M13380) is made of black steel. The 45 mm wide case of the “Black Steel” has been hardened by a special carbon-nitrite process, so that it is capable of withstanding even the strongest shocks and extreme weather conditions. The dial is available in classic blue as well as in black with white totalisers or in metallic grey. As with all Avenger models, the Avenger Skyland has the bezel tabs or “Rider Tabs” that are so loved by fans at 3, 6, 9 and 12 o'clock.

The Avenger Skyland series also uses the same automatic movement with calibre 13, which is based on the ETA Valjoux 7750 and provides a 42-hour power reserve. Thanks to its high precision, this caliber has now established itself in Breitling chronographs and has been used in the Chronomat and the Old Navitimer, among others. As already seen on other Breitling diving watches, the crown is screwed in, thus guaranteeing water-resistance up to 300 metres.

The history of the Avenger Skyland

Since its foundation in 1894, Breitling has established itself predominantly as a manufacturer of pilot watches. The company initially supplied the Royal Air Force with on-board clocks for their aircrafts and it was not until years later that also supplied wristwatches and chronographs for the pilots. This led to successful series such as the Chronomat, with which the U.S. Army Air Force was once officially equipped, or the further developed version, the Navitimer, which quickly became Breitling's flagship model. What is less well known is that Breitling also dove into the depths of the sea and, in addition to its high-quality diving watches, began selling diving watches at the same time. The SuperOcean in particular set new standards for the time in terms of water resistance of up to 200 metres and overshadowed the competition from Omega or Rolex.

The Avenger Skyland: Diver and pilot watch all in one

The next logical step was to bring these series together. For example, the company launched the Breitling Avenger Skyland, perfectly combining elements from both a diver's and pilot's watch. The Skyland's origins lie in the Aeromarine series, which in turn was a spin off from the Professional series to allow Breitling to focus on diving watches. In contrast to the Aeromarine, the Skyland takes inspiration from Breitling's military roots and, like the Super Avenger, features a wide case whose striking steel bezel and engraved numerals is a similar style to a diver's watch. On the other hand, the neat, uncluttered dial with its three totalisers and finely crafted hands are reminiscent of the chronometers Breitling once equipped pilots with.

The Avenger Skyland was produced from 2007 to 2009, before the series was renamed “Avenger” and was given minor visual updates. For example, the “Swiss Made” lettering was integrated into the dial. However, the Avenger did not last long either, and was replaced in 2013 by the Avenger II, which modernised the design and now serves as a blueprint for numerous other models, including the Avenger II GMT or the Avenger II Seawolf, which is water resistant up to 3,000 metres.

Discover these other popular series