Discover how the popular Breitling Chronomat was reinvented constantly over the years and how the Chronomat Evolution was created as a fusion of a pilot's and diver's watch.  More 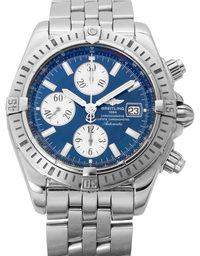 In choosing a second-hand Breitling Chronomat Evolution, you are choosing quality of the highest order. Once you have found the model for you and added it to the basket, you can confirm the order by completing the subsequent payment process. At the checkout, Watchmaster offers you the choice to pay the full amount via instant bank transfer, credit card or PayPal or to pay on finance for your Chronomat Evolution. Simply set a monthly instalment amount that suits you with one of our partner companies and it won’t be long until you have your favourite watch in your hands.

With the Chronomat Evolution, Breitling set the standard for masculine design, which would go on to become the “design du jour”. The lugs are no longer straight as in the old models, but short and stocky, giving the case more of a presence on the wrist. The case itself is an oversized design with a width of 44 mm and a thickness of 17 mm, which definitely makes an impression. The bezel is set with 2-carat diamonds all round, which gives it the necessary elegance without being over the top. Like all modern Breitling models, the bezel of the Chronomat Evolution is screwed in, making it more durable and shock resistant.

The watch is water-resistant up to 30 bar and is driven by the Breitling 13 calibre, which is based on the Valjoux 7750. Another highlight lies in the pilot style bracelet, which has been increased from 18 to 22 mm to now be 20 to 22 mm wide. It is assembled from 120 handmade parts, thus explaining the high price of up to €900.


Models and prices of the Breitling Chronomat Evolution

The history of the collection

What many Breitling fans don't know is that the Chronomat actually sold better than the legendary Navitimer for a long time. This fact is probably less well known as the Chronomat series has undergone countless name changes – one of which made it the Breitling Chronomat Evolution.

From 1940 to 1978, the Chronomat was mainly known for its slide rule bezel and it was thus predominantly aimed at engineers, mathematicians and scientists. In its early years, the Chronomat's philosophy focused primarily on suitability for everyday use and flexibility. Affected by the quartz crisis, Breitling had to temporarily cease production in 1978, before the Chronomat was finally able to celebrate its comeback as a completely new watch in 1984. This was followed by the well-known additions, embellishments and design changes, before the Chronomat Evolution kickstarted the latest instalment in the series. It was officially presented at Baselworld 2004, where it surprised the masses with a design that attempted to combine a diver's and pilot's watch. The clear layout and readability of the dial as well as the chronograph are hallmarks of a pilot's watch, while the unidirectional rotating bezel and water resistance up to 300 metres also established the model as a versatile diving watch.

The Chronomat Evolution became a bestseller and further strengthened Breitling's position in the luxury watch market. In 2008, the series was renamed again simply as the Chronomat, which was produced until 2011. It was called the Chronomat Calibre 13, which, like the Evolution, was equipped with Breitling's first in-house Breitling 13 movement. Over time this has also been replaced by the B01 movement in the newer models.