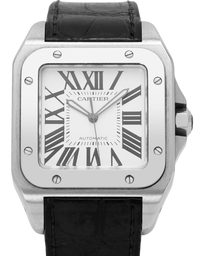 The history of the Cartier Santos 100


The Santos series is the cornerstone on which Cartier built its luxury watch segment. The friendship between Alberto Santos Dumont and Louis Cartier formed the project. The Brazilian pilot Santos Dumont longed for a watch that he could easily read while flying. Cartier fulfilled his friend's wish and developed a robust wristwatch with an extra-large dial. The name of this watch was also a dedication to the initiator. From the model originally intended as a unique specimen, the most famous watch series ever developed. For its 100th anniversary, Cartier launched the Santos 100. Cartier took current trends into account and presented a watch with impressive dimensions, an improved movement and, thanks to the Quick-Switch system, a wide range of variations in the type and appearance of the bracelet. When you decide to buy a new or used Cartier Santos 100, you not only receive a unique watch, but you are also part of a unique history.


The features of the Cartier Santos 100

The case of the Cartier Santos 100 has a diameter of about 38 mm, and even including the crown about 40 mm. Of course, there are larger watches and also smaller ones, but as we all know, size is not everything and watch lovers should not be advised against (or talk themselves out of) buying a Cartier Santos 100 just because of its dimensions. Although the watch has a striking appearance, its strength lies in the details and the fine workmanship. The dial with its large Roman numerals corresponds with the requirements of the first model: easy readability. It is driven by an automatic movement of the caliber 1847 MC. This movement functions with an almost non-existent deviation of only 000.2 seconds per day. This is made possible by the efficient magnetic field protection provided by nickel-phosphorus alloys in the movement escapement and a soft-iron shield integrated into the case. The extra-large version of the watch has a weight of 200 grams. Significant development time has also been spent on the ergonomic design of the case and its pairing with the bracelet. The case is slightly curved and thus merges smoothly into the curves of the bracelet. The buckle reflects the design of the case and has a very robust finish. The angular design of the case is inspired by the geometrical layout of the Eiffel Tower. Interesting side note: Gustave Eiffel moved in the same social circles as Alberto Santos Dumont and Louis Cartier. Although the Cartier Santos 100 is a pilot's watch, it has a water resistance of 100 meters. So, you won’t be jumping into the deep end in terms of price or quality, if you buy a used Cartier Santos 100.


How much does a Cartier Santos 100 cost?

Cartier attaches great importance to the fact that each model emphasizes the individuality of its wearer. With the Quick-Switch system, you can change the bracelet without the use of tools and attach a leather strap, stainless steel or gold and stainless steel bracelet to suit your taste. We have compiled a selection of references of the Santos 100 series for you here, which you can buy either new or pre-owned:


A pioneer in aviation

Who was the man after whom Louis Cartier named the world's first pilot watch? Alberto Santos Dumont was born in 1873 in Brazil, where his French father owned a coffee plantation. He sent his son to study in Paris, where he studied chemistry, physics and mechanics. As a child, Santos Dumont was fascinated by the stories of Jules Verne, in which air travels were described. At the end of the 19th century, he embarked on his first balloon flight, which finally awakened his interest in flying. He set about developing airships. He completed the first successful round flight over Paris with the "Santos Dumont No. 6". He donated the prize money of 100,000 Francs to the needy of Paris. He used a minor further development to the airship, the "Santos Dumont Nr. 9", to make excursions to Parisian cafés and nightlife and tied the ship to the next tree. This also led to the need for a watch that could be read even when using the hands to steer. Later he started to develop airplanes and even researched helicopters, which he could not yet technically realize. Horrified by the military use of airplanes, he decided in 1932 to voluntarily end his life. In Brazil, he is still considered a national hero today. In his honor the airport of Rio de Janeiro is called "Aeroporto Santos Dumont".


Other interesting series from Cartier