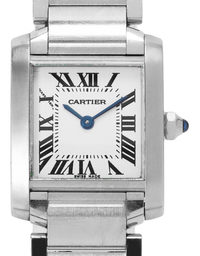 The Française enjoys great popularity with tank lovers alongside the original. The characteristic tank design, which is inspired by British battle tanks, it is of course also retained in this variant. For example, the case is adorned with a two girder-like structure. Imitating the revolving caterpillar tracks, which simultaneously trace and extend the sides of the dial. Not only geometrically convincing - the detailed elaborated dial through the combination of square and rectangular shapes. The track-like minute display also adds to the unique design of the tank. Sword-like blued steel hands complete the unmistakable look of Tank Française. Of course, the traditional roman numerals are also not missing in this variant - optionally at twelve o'clock, supplemented by a punctiform indices all around continuous and aligned to the center of the dial. On the side, the octagonal, beaded winding crown adorns this icon of modern watchmaking. 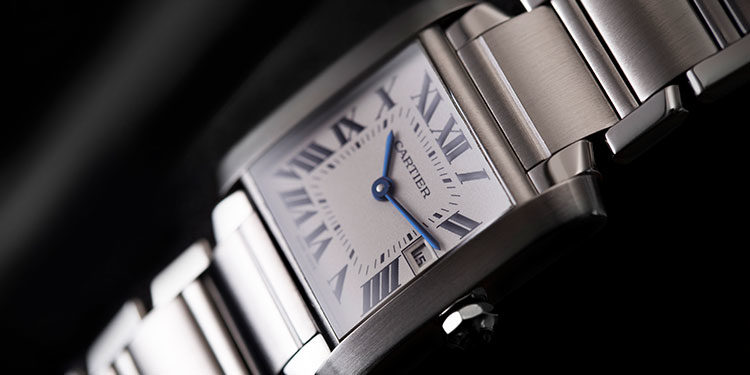 Main characteristic of the Tank Française is above all the seamless transition of the domed, centrally located in the bracelet housing in the elegant link chain bracelet. Without breaking the lines, the components of the elegant watch, which is available as a choice in stainless steel or gold, blend together. The result is a unique integrated bracelet look that completes the harmonious overall impression of the Tank Française. The extra-flat, narrow design underlines the simple and elegant impression that is inherent in this Cartier series. Visually neither intrusive nor showy, it is wearable every day. Not only does it combine technology and aesthetics, it also creates a symbiosis between a stylish piece of jewelry and a practical timepiece. Whether as an everyday watch or as a fashion accessory - the CartierTank Française is wearable for any occasion and shines even as a used model while offering cheap prices at the same time!

The history of the Tank Française

Inspired by the first published images of British assault tanks on caterpillars in World War I, Louis-François Cartier designed the first "tank" that became an icon of modern watchmaking. General John Pershing received the handmade prototype wristwatch in 1917 as a gift from the well-known Parisian jeweler in 1917, in gratitude for restoring peace in Europe with his armored cars known as tanks. The simple, clear forms he used in the design of the watch spring from the French "second Neoclassicism," which was a forerunner of the Art Deco, which was particularly popular in the 1920s. Objectivity and avant-garde style, which have always been a feature of Cartier's house, find their expression in the tank.

Cartier created not only an artistic gem with the Tank, but also revolutionized the watch world: With the functional and aesthetically pleasing wristwatch he replaced the common pocket watch. Together with the famous watchmaker Edmond Jaeger, he designed a universal design that was extremely popular even then and became a major component of Cartier's watch assortment. In 1996, Tank Française continued the series' success story by updating the classic in a modern way.

Whether for men or women, in politics, art or pop - the Tank can look back on a broad sponsorship for its 100th birthday. Just recently, reality star Kim Kardashian bought Jackie Kennedy's tank for $ 379,500 at an auction. 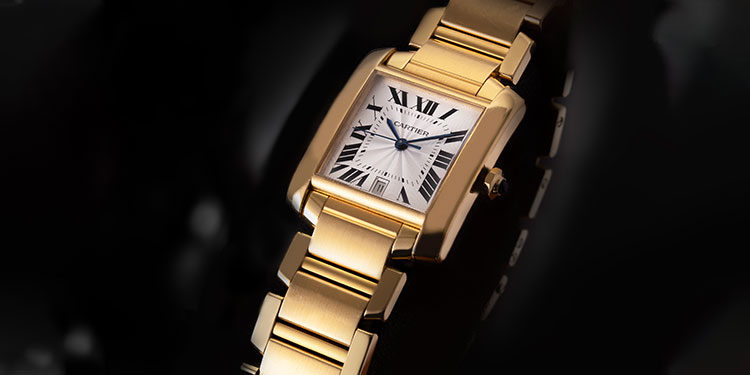 An overview of Tank Française models

Whether with automatic or quartz movement, made of steel or precious metal, with or without stones - there are also many variations within the series. Our Watchmaster online shop offers certified used Cartier Tank Française watches for only 2.000 €. 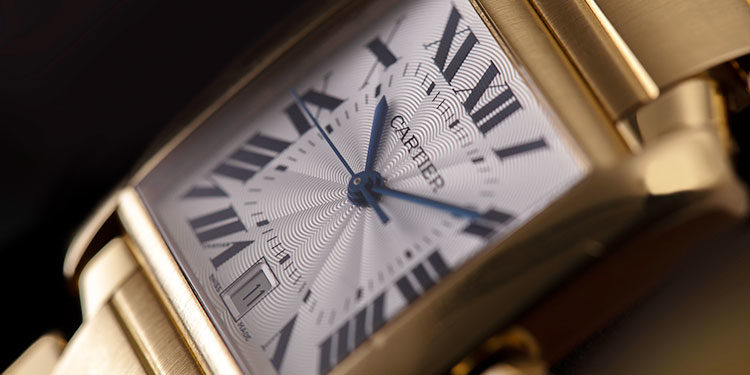 With the versatility and timelessness of the Tank models, it's not surprising that they've always enjoyed popularity with a variety of celebrities. So the tank made its cinematic breakthrough at the age of nine on the wrist of Rudolph Valentino in "The Son of the Sheik" - regardless of the historical discrepancy between watch and film setting. Since then, the tank has won many other celebrities. Personalities such as Michelle Obama, Jackie Kennedy and Princess Diana and superstars like Muhammad Ali, Madonna and Andy Warhol can be seen in numerous photos with their Tanks. The latter never wore his tank wound and said in an interview, "I do not wear it to show the time. I wear a tank because that's a watch you have to have." French fashion designer Jean Charles de Castelbajac, in his homage to Tank in the weekly Madame Figaro, says: "If all tanks could be built by Cartier we would live in peace!"

What Customers say about Us

* Terms and conditions apply
All prices include VAT. If differential taxation in accordance with §25a UStG is applicable the VAT will not be reported separately.
Watchmaster ICP GmbH | Charlottenstraße 60 | 10117 Berlin | Germany
© Watchmaster ICP GmbH
# 4b5de77