While Eberhard & Co. are a mainstay of the Swiss watch industry, they have also proven to be one of the most innovative chronograph designers from the start, constantly marking major milestones in their history. Discover more about one of the most exciting brands of recent years.  More 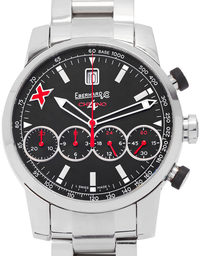 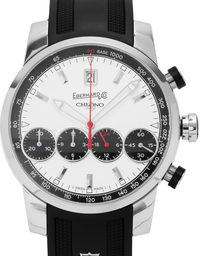 Buy Eberhard & Co. watches – time on your side

Are you looking for an Eberhard & Co. watch? Whether you’re looking for new, vintage or certified pre-owned Eberhard & Co. Luxury watches, we have a wide selection available at affordable and competitive prices. All timepieces sold by us are individually checked and are given a certificate of authenticity so that you can have total peace of mind in your purchase. Have you already found your dream watch? You can pay conveniently and easily by credit card and have your watch delivered to your home in no time. In addition to other payment options, you can also pay for your Eberhard & Co. on finance with instalments. Simply visit our website to find out which payment method suits you best. Still have questions? Our competent customer service team are of course always at your disposal and will be happy to provide you with more details.


Models and prices of Eberhard and Co. watches


About the brand that defies time

Eberhard & Co. was founded in 1887 by Georges-Lucien Eberhard as “Manufacture D'Horlogerie Eberhard & Co.” in La Chaux-De-Fonds in the canton of Neuchâtel, the historic birthplace of the Swiss watch industry. It wasn’t long before Eberhard & Co. began to patent its numerous technical innovations, which quickly established the brand in the luxury class of Swiss watchmakers. For example, in 1984 they patented a pocket watch with a new, simpler way for setting the time. In 1905, they released a timepiece that changed the way hours and minutes could be read.

Eberhard & Co. was also instrumental in the development of the chronograph and constantly found new ways of improving it. In 1919, the brand launched the world's first wrist chronograph, while in 1921 they registered a patent for a protective mechanism called the “Calotte Patrouille”, which protected the movement from dust and moisture. This was followed by chronographs with forward thinking complications such as the flyback function (1935), or the Rattrapante in 1939 with split-second functionality. Eberhard & Co. watches also played their part in the Second World War, when the “Magini System” supported the Italian air force in its attack on Japan.

In the 50s, a collection of diving watches called the Scafograf was published, which included a total of 300 models. In 2016, part of this collection was reissued and immediately won numerous prizes at the Grand Prix D'Horlogerie in Geneva, including Best Sports Watch. During the 60s, Eberhard & Co. Contograph had a breakthrough. It constituted the perfect compromise between sport and luxury, thus making sport watches wearable even in elegant settings. When the quartz crisis hit the Swiss watch industry, Eberhard & Co. also began to work with quartz movements, but also attempted to revive the use of mechanical chronographs.

Eberhard & Co. celebrated their 100th anniversary in 1987 with the Navymaster collection, a reminder of the company's deep connection as a supporter of sports and the military. The Italian Navy has been using Eberhard & Co. watches for a long time and the aerobatic squadron of the Italian Air Force are also immortalised by the “Frecce Tricolori” named after them. Eberhard & Co. also felt at ease drawing inspiration from motor racing and in 1992, they released a watch in honour of the racing legend Tazio Nuvolari, naming it the Nuvolari Chronograph after him.

In 1997 came the next coup with the 8 Jours model: A patented, overlapping spring system provided a power reserve of eight days with a single winding. Needless to say, Eberhard & Co. never forgot about its chronographs and in 2001, with the Chrono 4, it released a patented design that featured horizontally arranged totalisers for the first time. This revolutionised the way watches represented time. The Chrono 4 was a befitting choice for Eberhard & Co. to celebrate its 130th anniversary in 2017, with the company re-releasing the model as <>Chrono 4 130 Edition Limitée.

For many years, chronographs have helped us track and record time. Hours, minutes, 24-hour and small seconds were recorded by a sub-dial and marked on a specific place on the dial. We learned how to train our eyes for this and thereby separate time into clear units that never cross paths with one another. But time moves simultaneously, flowing freely and always passing by. Eberhard & Co. grasped this concept and visualised it with the Chrono 4 which has horizontally graduated totalisers. On this model, the small second hand is located next to the 24-hour dial on this, for example. You can see how the individual totalisers are interconnected and are perfectly in sync.

With so much innovative spirit, the company have of course amassed an eager fan following, who celebrate themselves under the hashtag #youreberhardstory. In addition to a biography of the company's own history, written by Giosué Boetto Cohen, these stories have also been collected and published online in a separate collection.

* Terms and conditions apply
All prices include VAT. If differential taxation in accordance with §25a UStG is applicable the VAT will not be reported separately.
Watchmaster ICP GmbH | Charlottenstraße 60 | 10117 Berlin | Germany
© Watchmaster ICP GmbH
# 263d351ce