Confident and distinctive - the Graham timepieces make a clear statement. The distinctive pawl can be traced back to British watchmaking and is consistently installed by Graham. Combined with Swiss know-how, strong creations are created.  More 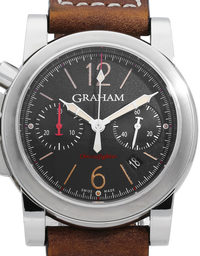 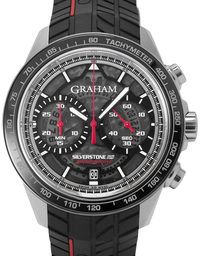 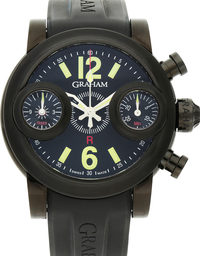 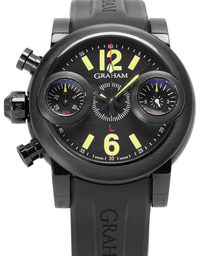 How can I get to my watch fast? Finance Graham!

Watchmaster's online shop offers you a wide selection of new and certified used Graham watches that are easy and safe to buy. We guarantee you the authenticity and the best possible quality. Our certified, in-house watchmakers check and certify every incoming timepiece.
You have already decided on your favorite model and want to get it home as soon as possible? Finance your Graham watch and pay the purchase price at your own pace. Alternatively, you pay quickly and easily by credit card or PayPal and the classic bank transfer is also at your disposal. Find out more on our website about payment and financing options and purchase your certified Graham from us at comparably low prices today.

Overview of the current collection

Graham Chronofighter Traditional, functional pilot's watches make up the Chronofighter collection. They are consistently robust and strong in character - not least because of the crown positioned on the left side and the solid pawl covering it. The models have a second time zone and exude sportiness and elegance despite their size.
The following series belong to the Graham Chronofighter family: Graham Silverstone The Silverstone collection is all about sportiness and classic design. With various complications such as chronograph, GMT, Big date and tachymeter, the collection offers enough options. In all models of this series, the characteristic pawl is missing. The crown sits as it's known from other watches on the right side.
The following series belong to the Graham Silverstone family: Graham Geo.Graham Taking into account the fine watchmaking, this collection presents itself much more restrained than most Graham watches. Classic elegance and combination options for every outfit make it stand out. The Geo.Graham collection reflects the highest degree of innovation and refinement.
The following series belong to the Geo.Graham family: Graham Special Series From passionate partnerships, not infrequently adrenaline-loaded tests on the racetrack or behavioral tests in arctic climates, these strictly limited creations emerged:

The Top-5 reasons to buy a Graham

If you are interested in buying a used Graham watch, it means, that you can buy a watch usually for a cheaper price. We prepared for you a listing of four exciting Graham models.

Graham watches as an investment - does it make sense?

The fact that a valuable watch can be meaningful as an investment is no longer a big secret. It is undeniable that high returns can be achieved with the right models. But which are these right models? Those of the big, well-known brands are comparable to black or red in roulette: The possibility of being right is rather high, but only with high bets a considerable outcome is expectable.
An interesting alternative are small Swiss manufactories. With less awareness and often very limited production numbers, demand may increase exponentially in a few years. A comparatively small company is also Graham, a very long tradition, the brand can not submit. The company comes from Switzerland, which is quite advantageous in the industry. If the investment in a Graham watch makes economic sense or not, we can’t judge.
You buy a luxury watch primarily because you like it, you can identify with it or you simply need a robust, functional watch. In any case, an intensive research before the final purchase decision is a must, because there is no guarantee for an increase in value at any time - and no one can not give you any.

The history of the Graham brand

The Graham brand is not as old as it likes to claim. Although it came from the idea of presenting current watch collections, which pick up the tradition of the most famous British watchmakers. It was founded in 1995 as part of the La Chaux-de-Fonds based watch company "The British Masters".
George Graham, at his time the greatest and still no forgotten watchmaker, lived from 1673 to 1751. Today serves the Graham brand not only as namesake, but also as a source of inspiration. Because the watch factory "Graham London", which was formerly known as "The British Masters", has dedicated itself to the revival of traditional British watch brands.
Biel's watchmaker Eric A. Loth as well as watchmakers steeped in tradition, such as ETA and SMH boss Ernst Thomke, Pierre-André Finazzi and Jean-Pierre Jaquet were involved in the foundation. Six years later, when the investor William Asprey also joined the company as chairman and distributor for the UK, the company was renamed "The British Masters S.A.".
"The British Masters S.A." sold two well-known brands, in addition to Graham was Arnold & Son, named after the renowned watchmaker John Arnold (1736 - 1799). However, the brand was sold to a watchmaker in 2010, with The British Masters now focusing solely on the brand Graham. This was followed by another name change to the company's current name: "Graham London", headquartered in La Chaux-de-Fonds, Switzerland.
Graham watches are eye-catching throughout. The brand is known for oversized cases, extravagant dials and extreme constructions, for example, with the characteristic pawl at nine o'clock. The models of the house look striking and self-confident, but are suitable for gentlemen who consciously seek a sporty, functional and eye-catching timepiece.
The women's models of the brand are optical less “brutal”. Although these should be functional as well as elegant at the same time. The special pawl on the housing was still not indispensable, on some women's models - this makes the, otherwise feminine, timepieces avant-garde and distinctive.

The philosophy of the brand

The quote from Jules Verne "Anything one man can imagine, other men can make real." Graham made it’s philosophy. A well-chosen motto, because it implies, on one hand, the free development of creativity, on the other hand, it takes up the basic idea of founding: orienting oneself on the vision of George Graham, being inspired by his values. In short, for the Graham brand, there are no limits to the creative power.
What our customers say about us
SELL YOUR WATCH
Looking for a Watch?
Join our newsletter
[[ newsletterCtrl.subscriptionMsg ]]

* Terms and conditions apply
All prices include VAT. If differential taxation in accordance with §25a UStG is applicable the VAT will not be reported separately.
Watchmaster ICP GmbH | Charlottenstraße 60 | 10117 Berlin | Germany
© Watchmaster ICP GmbH
# 263d351ce