Hamilton is a watch brand coming from America. Today, Hamilton watches can adorn themselves with the prestigious label "Swiss made", but it has never lost the wild and free American spirit in its designs.  More 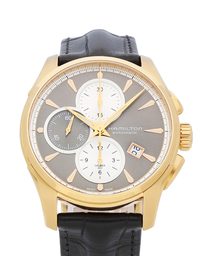 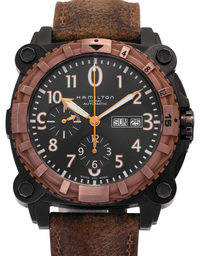 
At Watchmaster, all watches are checked for authenticity before being sold. The watches are refurbished by our master watchmakers and then equipped with a certificate of authenticity. Therefore, we offer in our online shop exclusively original certified luxury watches - whether new, vintage or second hand models. If you are interested in a certified pre-owned Hamilton watch, we offer beautiful timepieces for men on good deals. You have the option to pay by credit card. But you also have the option to pay via PayPal with just a few clicks. If you prefer to buy your Hamilton watch in smaller installments, that is no problem either. With the help of individually selectable financing options, you can choose exactly the option that suits you best. Take a look at our website or get personal advice through our customer support.


Popular collections of the brand

In 1892 Hamilton was founded in Lancaster, Pennsylvania. The factory was located there for the first 111 years. The company achieved its first successes when the infrastructure was extended by railway networks. At that time, Hamilton was commissioned to develop accurate timepieces to ensure punctuality, but also to ensure the accuracy of train movements and prevent accidents. As Hamilton became so successful in the rail sector, new contracts were added at a time when aviation was becoming increasingly present and the company was able to break new ground. The timepieces were used for the "coast-to-coast" services of the US Airmail and still equip the Red Bull Air Race World Championship today.

Innovation has always been one of the brand's main motivations. In 1957, Hamilton introduced the Ventura, the world's first battery-powered electric wristwatch. Another sensational development was the Pulsar, launched in 1970, the first watch with a digital LED display. Since 2011, ETA and Hamilton have been working together to produce their own movements for the brand. These have an impressive power reserve of up to 80 hours.

Hamilton has been part of the Swatch Group since 1974 and has been based in Biel since 2003. Since then the watches have been allowed to carry the prestigious "Swiss Made" label. Whether in the skies or in the depths of the sea, with automatic or quartz movement, Hamilton attaches great importance to precision and accuracy, but always retains its inventive spirit of the American Spirit.


The philosophy: Precision and free spirit

Hamilton's philosophy is based on many years of experience in the field of watch technology. The highest precision is the cornerstone of success, coupled with ever new innovations and unique manifestations, the brand can attribute a strong recognition value. The Swiss quality with the American free spirit is the unique recipe for the success of the company.


Hand in hand with Hollywood

For many people today, Hamilton is known above all for its pilot's watches - a tradition to which it is still committed today. Away from the skies, however, Hamilton's focus has always been on the silver screen. Whereas in the past, Hamilton contributed watches for classics such as Kubrick's "2001: A Space Odyssey" (Hamilton Odyssey 2001) and cult hits such as Elvis Presley's "Blue Hawaii" (Hamilton Ventura), the company now equips the new "Men In Black" (Hamilton Ventura) or cooperates with Amazon for the new Jack Reacher series (Hamilton Khaki Field Auto Chrono). Hamilton has already presented its watches in over 500 films, including classics such as the Marlene Dietrich films "Shanghai Express" or "Frogmen" and modern cinema hits such as "Interstellar" and "The Martian". Hamilton has also worked with the Savannah College of Art and Design (SCAD) in Georgia, and since 2006 has presented a film award called the Behind The Camera Award, which honours great achievements behind the camera.