The Jaquet Droz brand was founded in 1738 by Pierre Jaquet Droz in Switzerland. The history of the manufactory is characterized by elegance, travel and art, which is reflected even today in its philosophy and especially the models. The brand is part of the Swatch Group since 2000.  More 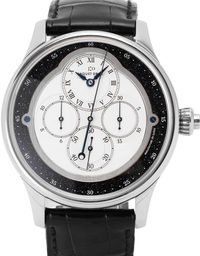 To buy a Jaquet Droz watch, you no longer have to go to the jeweler today. This is much more convenient and, above all, time-saving. You can find certified, used Jaquet Droz models and vintage timepieces at the Onlineshop of Watchmaster. Of course, as a certified dealer, we guarantee the authenticity of each timepiece. In addition, our in-house watchmakers subject every model to intensive testing and bring them visually and technically to the best possible shape. But even a used Jaquet Droz is not exactly cheap. Therefore, we offer a favorable financing model, you can easily put together an individual instalment plan for the watch of your choice. So you can finance your Jaquet Droz and pay the purchase price comfortably over a maximum of up to 60 months, but wear it on the wrist in just a few days!

The 5 most interesting models

Jaquet Droz prices at a glance

A Jaquet Droz for investment reasons?

Usually you buy a wristwatch for simple reasons: You need a timepiece and choose one that suits your own tastes and needs. However, another factor can be decisive for luxury watches in particular - is the watch economically worthwhile as an investment?
A clear statement can not be made here, the differences of the available luxury watches on the market are immense. However, it can be argued that watches from Swiss brands are on average the most stable in terms of value. Tradition also plays a role here, and in particular the complications built in - because that makes a watch unique.
Jaquet Droz models meet these criteria. The brand has its origin in Switzerland and looks back on almost 300 years of history. The watches of the manufactory are full of special complications. The models are rather collectibles and works of art, whether it is an investment in terms of value added over time. Within the relatively small group of buyers they are very popular.
Whatever you choose in the end, who buys a watch for investment reasons, should conduct thorough research beforehand.

The history of a manufactory - Jaquet Droz

The history of the manufacturer begins with the birth of Pierre Jaquet Droz in 1721 in La Chaux-de-Fonds. Droz is the first in his family to be seriously interested in watchmaking and precision mechanics. From 1738 to 1747, Pierre Jaquet Droz devotes himself entirely to watchmaking, creating a series of grandfather clocks. These were characterized by their advanced movements and were clearly ahead of all previously produced movements. Due to his skill, great care and knowledge of mechanical principles Droz begins to combine his movements with music and animatronics. He quickly aroused the interest of a wealthy customer base.
In 1750 Pierre Jaquet Droz marries Marianne Sandoz, in the following years their two children Julie and Henri-Louis were born. But his wife Marianne and daughter Julie died quickly after each other in 1755. Destined to fate Pierre Jaquet Droz now devotes himself entirely to watchmaking and never marries again. His life takes an unexpected turn when Droz meets Lord Marischal. He advises him to publicize his works abroad and helps Pierre Jaquet Droz to the Spanish royal court. The then ruling King Ferdinand VI is downright excited about Droz 'pendulum clocks and acquires six specimens.
Back in La Chaux-de-Fonds, Pierre Jaquet Droz now has enough funds to make his dream become true: Together with son Henri-Louis and his adopted son Jean-Frédéric Leschot, the consistent development of advanced movements begins. The culmination of the partnership between Droz and Leschot are the three androids - the writer, the draftsman and the organist. The masterpieces arouse so much attention that the trio, as it were, has an obligation to present them everywhere. So begins a journey with stops in Geneva, Paris, London, Netherlands, Flanders, northern France, again Paris, Lyon, Russia and Madrid.
Backed with the immensely increased reputation, Pierre Jaquet Droz decided in 1774 to open a studio in London, the most important city for trading back then. He transfers the leadership of the studio to his sons, Henri-Louis and Jean-Frédéric. The latter provides connections to the Chinese market. Pierre Jaquet's fascination for ornithology also meets with approval from the Chinese imperial court, and many pendulum clocks or music boxes decorated with birds are imported into the forbidden city. Even today, numerous automatons and pocket watches by Pierre Jaquet Droz are kept in the museum of the imperial palace.
The company continues to grow and sells its products worldwide. For health reasons, Henri-Louis decides in 1784 to settle down in Geneva. Together with Leschot, he founds the city's first watch manufacturer, which makes timepieces with elaborate complications. Due to their talent and interest, both men are awarded honorary citizenship by the City of Geneva.
After the French Revolution the financial situation of the company is looking bad. In addition, Henri-Louis Droz dies in Geneva in 1790, henceforth Jean-Frédéric Leschot manages the company alone and decides to put off exports to the Far East. Through Napoleon's continental blockade, with England is proving difficult until the market for luxury properties completely disappears. Thus also the heyday of the manufactory Jaquet-Droz & Leschot ends.

Let's jump into the year 2000. It's an exciting year for Jaquet Droz as it's being acquired by the Swatch Group. The traditional brand is thus included in the prestigious luxury segment and is now found next to well-known manufacturers such as Omega, Tissot or Breguet. Jaquet Droz will provide the Swatch Group with all the technological means, know-how and international distribution network. So equipped, the company gets up very quickly after a long time in an existence in the shadow. Already in 2002, the Grande Seconde was inspired by an 18th century pocket watch. In 2008, Jaquet Droz breaks with a centuries-old myth of watchmaking and launches The Pocket Watch. The model was designed in 1785 and has since been the source of inspiration for some legendary watches.
In 2010, Marc A. Hayek took over the management of the company. His vision is to promote quality and innovation, while sharing the emotional and poetic values ​​of the 18th century.
In the same year, the company moved to a new, 2,500-square-meter Haute Horlogerie studio in La Chaux-de-Fonds. The new location gives the brand new momentum, as the clocks and the studio itself are characterized by artistic savoir-faire. At irregular intervals, timepieces are adorned by unbelievable craftsmanship. Creations the world has never seen. The company continues to keep alive its original fascination of its founders for birds and launched The Bird Repeater in 2012. The complications are unusual in a watch, but of breathtaking beauty and complexity.
With the Lady 8, the brand surpasses itself in 2015. An automatic device in the form of an unfolding lotus blossom adorns the timepiece, making it the expression of refined femininity.
The creativity at Jaquet Droz knows no borders. So we can certainly expect one or the other surprise in the coming years. It's clear that the timepieces by Jaquet Droz are more a work of art than wristwatch - but they always reflect luxury.

High standards, refined creativity - these are the attributes of the philosophy of Jaquet Droz. To put every viewer in breathless amazement, watchmakers and artists have set themselves the goal in the creation of new designs. How should that look? There are no limits for your creativity. For those who like it especially exclusive, the company offers to manufacture the dial of any model individually according to customer requirements. So everything is literally about art.
What our customers say about us
SELL YOUR WATCH
Looking for a Watch?
Join our newsletter
[[ newsletterCtrl.subscriptionMsg ]]