Mühle Glashütte has been based in Glashütte for almost 150 years. Today, the traditional company specialises in functional wristwatches and nautical measuring instruments. From diver's watches and racing chronographs to classic three-hand models, Mühle has something for everyone.  More 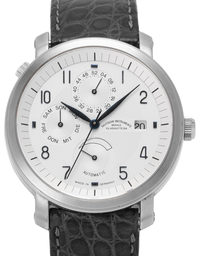 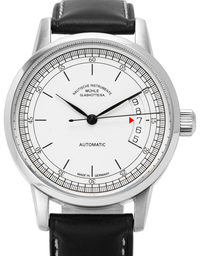 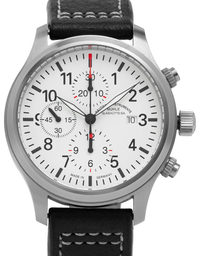 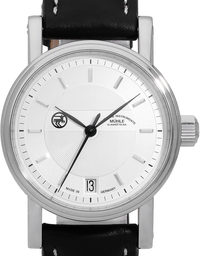 
Alongside established big brands, we also have more affordable watches from interesting manufacturers such as Mühle Glashütte in our online shop. All Mühle watches are checked and certified for authenticity by our master watchmakers. Whether new, certified, used or vintage - the choice is yours! If you have already decided on your favourite timepiece, we offer you various payment options. Finance your Mühle Glashütte watch in small instalments or buy it directly using a credit card or bank transfer. Visit watchmaster.com to find out about other payment options and how to get your watch to your home as quickly as possible. Our customer service will be happy to advise you.

The most popular Mühle Glashütte collections 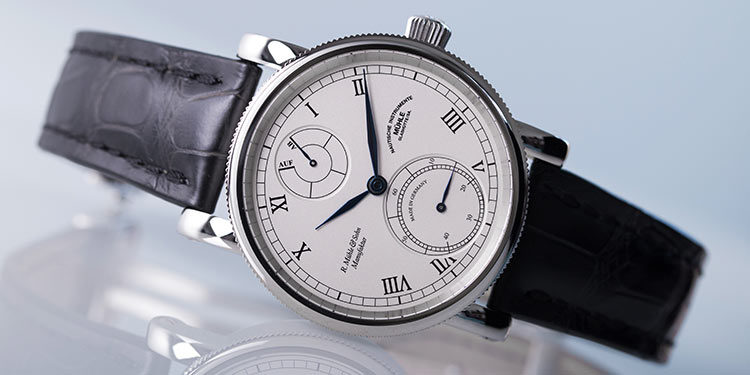 How much does a pre-owned Mühle Glashütte watch cost?

Pre-owned and vintage Mühle Glashütte watches as an investment

Although Mühle Glashütte has been closely associated with watchmaking for more than a century, it has only been making its own wristwatches for a few decades. Above all, special editions or limited editions are often worthwhile as an investment and are experiencing a constant price increase due to their limited quantity. Their timepieces are in the mid-price segment, but it pays off to keep your eyes open for well-preserved used Mühle models.

"Nautische Instrumente Mühle Glashütte" can look back on almost 150 years of company history and is deeply rooted in Glashütte Germany. From the manufacturer of measuring instruments for watchmaking to vehicle speed gauges, the brand's portfolio has expanded and changed over and over again. Over several generations, the knowledge has been passed on the production of highly specialized watch components, today it serves as the basis for the production of wristwatches and nautical measuring instruments.

The history of Mühle Glashütte


Robert Mühle's interest in the production of timepieces started early: In the 1860s, he completed an apprenticeship as a precision mechanic at the watch manufacturer Moritz Großmann and produced precision measuring devices, which he needed for his watches. Founded in 1869, “Robert Mühle & Sohn” soon became the sole manufacturer of measuring instruments in Glashütte. His main customers were the local watch companies and the German watchmaking school, for which he produced, among other micrometre, emery tools and blur raking machines.

In the 1920s, the takeover by Robert Mühles sons Paul, Alfred and Max brought a fresh wind into the company: Robert Mühle & Sohn's repertoire expanded to include measuring and indicating instruments for vehicles, for example in Maybach and Horch cars or in motorcycles fo BMW were installed. In addition, they joined with two other manufacturers to the “Vereinigte Glashütte Rechenmachinenfabriken”. The other companies had been the “Tachometer- und Feinmechanische Werke Arthur Burkhardt & Cie” (short Saxonia) and the Schumann & Cie.- Robert Mühle & Sohn. They founded a trading company, which dissolved again after some time.

During the Second World War, the company was saved from economic bankruptcy due to their specialization. Their speedometers and car watches were installed in tanks of the German Wehrmacht. After the war, a large part of the production machinery was seized and transported away by the Soviets as part of the dismantling of technically sophisticated corporations. The remainder of the company was affiliated as “Messtechnik Glashütte” to the Zeiss-Werke Jena, a heavy blow for the family Mühle. At the end of 1945, the reconstruction of the Glashütte watch industry began – Hans Mühle took this opportunity to found a new company: “Ing. Hans Mühle” which had now specialized in pressure and temperature measuring equipment and quickly grew from an initial three employees up to sixty. But a short time later, another stroke of fate befell the company, during the German division, it was forcibly nationalized in 1972 and incorporated in 1980 in the VEB Glashütter Uhrenbetriebe (GUB). Hans Mühle became Sales Director of the GUB, 10 years later he became one of five managing directors. His responsibilities were the distribution of wristwatches in Eastern Europe and the worldwide business with marine watches and marine chronometers, which should play a crucial role in the current direction of Mühle Glashütte. After the reunification of Germany, he left the “Glashütter Uhrenbetriebe GmbH”, which now also no longer manufactures timepieces for naval operation. In order to close the resulting gap, he founded in 1994 the "Mühle Glashütte GmbH nautische Instrumente und Feinmechanik".

Thanks to his previous work, he was already able to establish contacts all over the world, and the worldwide demand is tremendous. When asked whether the company also produces watches for sailors, Hans Mühle says yes – and lays the foundation for a new success story. Wristwatches from Mühle Glashütte were initially intended as part of the ship's accessories, design follows function. The company's first watch is nameless, followed by two more models with a nautical theme: a men's scuba diving watch and the naval aviator's watch. Since then, the watches have been constantly evolving and expanding the range: 2003, the patented woodpecker neck regulation was introduced as an evolution of the Glashütte gooseneck. Technically, it is modelled on the suspension of a woodpeckers head and so very shockproof. After the takeover by Thilo Mühle in 2007, the newly developed “Mühle-Dreiviertelplatine” was launched the following year, followed three years later by the first self-constructed hand-wound movement. For the company's 145th anniversary in 2014, two of its own calibres were presented. Named after founder Robert Mühle they are called RMK 01 and RMK 02.

The philosophy of the brand

Mühle Glashütte is a family business with almost 150 years of history of tradition and independence. One of the most important things about timepieces is their functionality. The first watches were used on ships and thus had to fulfil certain criteria that still influence the formal idiom of the company: the simple and uncomplicated readability of the wristwatches is the most important criterion. At the same time, the company can look back on a century and a half of experience in the manufacture of measuring tools, which is reflected in the precision of its wristwatches and marine gauges.

* Terms and conditions apply
All prices include VAT. If differential taxation in accordance with §25a UStG is applicable the VAT will not be reported separately.
Watchmaster ICP GmbH | Charlottenstraße 60 | 10117 Berlin | Germany
© Watchmaster ICP GmbH
# 9887504f9