The Omega De Ville series is a reserved, but essentially perfect series. Absolute elegance makes it equally suitable for men and women. The series's appearance seems versatile, yet they all reflect classic understatement.  More 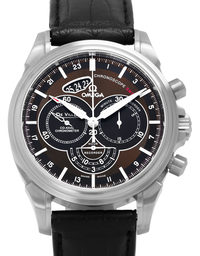 The Watchmaster online store offers a variety of certified, used luxury watches, including interesting models of the Omega De Ville family. Used models can be found at fair prices in great quality. All watches available in the Watchmaster shop are fully refurbished and certified. You can either finance your Omega De Ville watch – pay it off in small instalments over a period of time – or pay directly by credit card, bank transfer or via PayPal. If you are unsure which payment option is best for you, or you have any other questions, please do not hesitate to contact our customer service.

Omega De Ville – the latest collections and prices at a glance

The Omega De Ville family consists of six series. Below is a short portrait:


The history of the Omega De Ville

It is one of the most important success models of the Omega brand: The Omega De Ville. Although the collection is comparatively unknown locally, it is in high demand internationally. It represents the antipole to sports watches which are widely popular in Germany. As a counterpart to Seamaster and Speedmaster, the De Ville is very classic and elegant, almost archaic.

Its history begins in 1960, when Omega first used the name for a special edition of the Seamaster series. The name was always a synonym for simple and elegant models, which are visually distinct from sports watches. Models with the lettering "De Ville" should offer a dignified alternative, a restrained and evening suitable design. Three years later, the COSC certification became another feature of the series, since 1967, the series now stands for innovative watchmaking technology from Omega. Today, the De Ville family is made up of models from six different series that are outwardly different, but essentially share the same value: a healthy level of understatement in a perfect watch.


Omega reached important milestones with some De Ville models. Not just for the company itself, but also for the entire watchmaking history. Among other things, it was the De Ville, which was provided in 1999 as the first watch ever with the, back then completly new, Co-Axial escapement. The friction between the armature and the escapement wheel had been decisively reduced, so that the precision and lifetime of the movement was significantly increased. The revolutionary mechanism redefined the manufacture of mechanical movements in the 21st century.

The hand-wound movement 2500 was also used first by Omega in the De Ville, because the exquisite watch offered the ideal platform and is still used today in the De Ville Prestige. In 2007 Omega presented the self-developed automatic calibre 8500 with Co-Axial escapement. Once again, the De Ville was equipped with it first. The result was the Omega De Ville Hour Vision series. Since the range of the De Ville collection is now very large and includes six series, we would like to emphasize once more: The models are all different in housing shapes as well as movements, dials, bracelets and crowns. At first glance, the De Ville family seems like a colorful collection, but on closer inspection, one thing stands out in particular. Every single watch is restrained in perfection, classic and simple. Not pushy, but timeless beautiful and perfect. It was for this purpose that De Ville was conceived: to underline effectively a subtle appearance.


The De Ville Ladymatic for the woman of the world

A special member of the De Ville series is the series of the Omega De Ville Ladymatic. It was first launched in 1955 and embodies one of the first self-winding watches specially designed for women. Over 50 years later, Omega revives the name with a revised version of the Ladymatic.

And from the beginning, the series fascinates women around the world. The Oscar-winning actress Nicole Kidman fell for the beauty of the De Ville Ladymatic Co-Axial 34mm (Ref 425.65.34.20.55.010). No wonder, the model is almost entirely made of 18-carat Sedna gold, the mother of pearl dial is framed by a diamond-set bezel. The model is powered by the Omega Co-Axial Caliber 8521, waterproof it is up to 10bar pressure. With a new price of €31,200, the watch is not a cheap model, but a beautiful. The watch and Nicole Kidman complement each other perfectly, subtle yet exciting performances are inevitable. Since the actress harmonizes so well with the Ladymatic series and can identify personally with the watch, today Kidman is the official commercial face of the series.


Other interesting series of Omega