The famous Omega Seamaster is considered an icon among the divers' watches. The Seamaster 300 M has a sporty, nautical-typical design and is waterproof up to 30 bar. Since its release in 1957, it has appeared in many different collections.  More 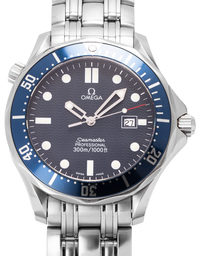 Since its launch in 1957, the Seamaster 300 M appeared redesigned in a number of different collections. So there are many different versions available today. A few years ago it was replaced by the Seamaster Diver 300 M - a reason why the older models are even more popular today than they were then. Some features are common to all models: the water resistance up to 30 bar, the stainless steel case and its sporty, divers’ watch typical design. This is characterized mainly by the rotatable bezel and the luminescent indices. So the Omega Seamaster 300 M is not only a sporty and elegant accessory, but also a highly functional diver's watch!

It is available in different colors and with differently designed stainless steel bracelets. A black dial or a blue dial, usually with a wave pattern, are typical. The link chain bracelet has either three- or five-rows. The Seamaster 300 M also comes with a practical chronograph or time zone function. It has a wide range of case sizes, so the right model is guaranteed for every wrist!

The history of Omega divers watches

Omega is next to Rolex probably the most famous Swiss luxury watch brand. Like her sister, it stands for tradition and excellent, innovative watchmaking. It is best known for its close connection to space travel. The Speedmaster Moonwatch is not only NASA's official watch, it was the first and only watch on the moon. But also in the field of diving watches, Omega can assert itself successfully since the 1930s. As far back as 1932, Omega introduced the the first waterproof watch to the Navy. However, the breakthrough came not earlier than with the Seamaster family. The first Seamaster came on the market in 1948. The watertightness was guaranteed by the bolted bottom and the special O-ring seal. The Seamaster was especially compared to other diver watches as slim and fashionable-elegant. So she quickly gained popularity outside of the water as a fashion accessory.

In 1957, the popular Seamaster 300 followed. It was considered a revolution of the Omega divers watches: It was equipped with a rotating bezel, double crown seal and a special glass. It was able to withstand the highest test pressure of 20 bar without any kind of problems. Since then, Omega has developed a wide range of interesting Seamaster designs that have remained faithful to the design of the classic and its commitment to state-of-the-art functionality. 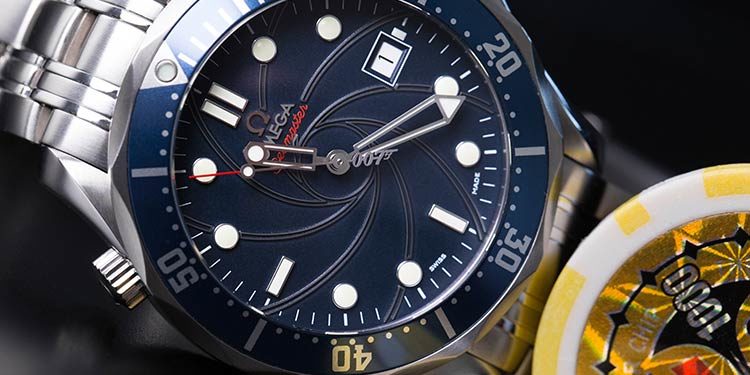 Omega Seamaster 300 M prices and models at a glance

In particular, no longer produced series such as the Seamaster 300 M are often popular with enthusiasts and collectors. Many models can be distinguished here. Below we have summarized some of them:

The Omega Seamaster is known as a movie star for over two decades: as companion of the famous secret agent James Bond. With "Goldeneye" in 1995, the high-end luxury watch celebrated its cinema debut thanks to costume designer Lindy Hemming, who then opted for the model with blue dial. Pierce Brosnan wore the model 2541.80.00.

Of course, the iconic watch should not be missing in the latest Bond film: In "Specter" from 2015, the action hero again wearing a Seamaster on his wrist. This time, the watch and movie are even related to each other by name: The Omega Seamaster 300 SPECTER Limited Edition was dedicated to the film and the Omega Bond era. Its design pays tribute to the first Seamaster 300M from 1957. Daniel Craig wears it with a black/gray NATO strap. But also the Omega Aqua Terra 150m with blue dial can be seen here on 007’s wrist. 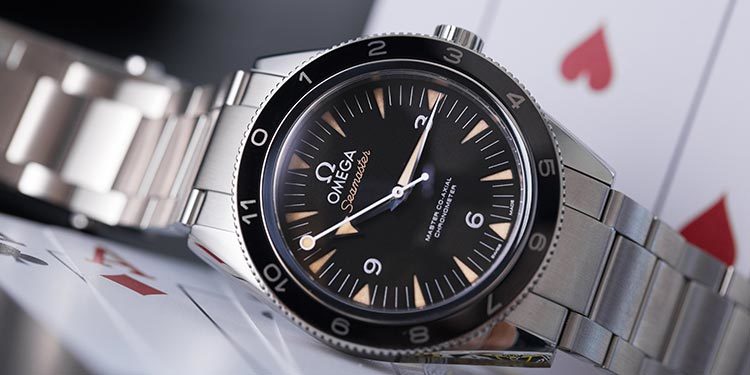 In our online shop, you will find numerous certified, used luxury watches such as the Omega Seamaster 300 M. The purchase of used watches is not only financially worthwhile compared to buying new models. Often, vintage series also gain value as they are particularly popular with enthusiasts and collectors. If you have found your Omega Seamaster, we will gladly advise you on the financing options. In addition to payment by credit card or PayPal, we also offer a very flexible payment in installments. So you can plan your investment individually. For more information on buying and financing used luxury watches, visit our website. If you have further questions, please contact our customer service!
What our customers say about us