The Speedmaster Moonwatch made history: it was the first watch on the moon on Buzz Aldrin's wrist. The “Speedy” convinced with its practical tachymeter scale, robust construction and perfect precision even in weightlessness of space - not only NASA, but also Omega fans worldwide.  More 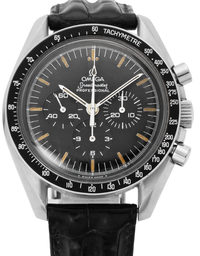 The Omega Speedmaster Moonwatch has the status of an icon: It was the first and so far only watch on the moon. With Buzz Aldrin, the "Moonwatch" entered the alien planet for the first time in human history in 1969. It was able to withstand the adverse conditions without any problems. Not only with robustness and functionality, but also with its elegant design the Omega Speedmaster Moonwatch could score. It has remained almost unchanged over the years and is thus still a reminiscent of the historical world event.

Omega Speedmaster Moonwatch watches are ruggedly built and always equipped with a stainless steel case. The bracelet is usually made of stainless steel - there are few older Rolesor variants. In space, an automatic movement would be inoperative due to the lack of gravity. Therefore, all models are equipped with a manual wind mechanism.
For easy reading of the speed, the black bezel is equipped with a tachymeter scale, which makes reading your own speed much easier. Most of the dial is also black - but here are some special models whose dials have different colors. The Omega Speedmaster Moonwatch always has three sub-dials: the "small seconds", "30 minutes" and "12 hours".

Even the glass was adapted back then to the use in space: the Moonwatch is equipped with a Hesalitglas, as this material does not splinter on impacts or gets damaged like Spahirglas. Thus, the safety of astronauts in space guaranteed. Of course, the Speedmaster Moonwatch cuts a fine figure on our planet as well: Thanks to its classically sporty design, it can be combined in many different ways and can be easily worn in any situation! New models are always delivered with an additional NATO-Strap and astronaut wristband and a tool to change the bracelet.

The history of the Omega Speedmaster Moonwatch

The first version of the Omega Speedmaster was released in 1957 to the market. At that time a manned flight to the moon was still considered utopian. So the first Speedmaster, with the reference CK2915, was designed for the demands of the at that time extremely popular racing sport. It is the first wristwatch with a tachymeter scale on the bezel. Robust and highly functional, it proved to be the perfect racer accessory.

Space travel became a focus of the western public in 1961 when US President J. F. Kennedy announced in his famous speech that he wanted to send an American to the moon. Of course, the Gemini and Apollo missions planned everything meticulously, so NASA went in search of a watch that could withstand extreme situations in space. Watches from different manufacturers have been taken to various endurance tests and one convinced in all categories: the Omega Speedmaster Moonwatch. After extensive testing in 1965 it achieved the status of the official NASA watch. Already in October it traveled with the Gemini-3 mission into space. But its first space flight it completed - what many do not know - in 1962 as the private watch of Walter Schirras on the Mercury Atlas 8 flight. The most famous field trip was the Apollo 11 mission in 1969. Neil Armstrong, Michael Collins and Buzz Aldrin were the first humans on the Moon. Theoretically, all three were equipped with Speedmaster Moonwatch wristwatches - since Neil Armstrong, who was known to be the first to set foot on the moon, left his watch on board. So Buzz Aldrin's Speedmaster was actually the first wrist watch on the Moon. Tragic: When Aldrin later sent his watch to the National Air and Space Museum, it got lost during transport and is still missing today.
Its most famous performance of the Speedmaster Moonwatch was on the Apollo 13 mission. After the astronauts had to shut down all systems except for the vital systems after an explosion on board, all they had to determine for the exact moment and duration for firing the brake rockets was their Speedmaster Moonwatch watches to determine. For this contribution to the successful return of the astronauts, the Omega Speedmaster Moonwatch was honored with the highest NASA award: The Snoopy Award. Since then, several special editions of the Moonwatch, such as the Omega Speedmaster Moonwatch Anniversary Snoopy Award (Ref: 311.32.42.30.04.003) were launched.

Interesting models of the Omega Speedmaster Moonwatch at a glance

The characteristic feature of the Speedmaster Moonwatch is the tachymeter bezel. The watch has its iconic status because of its history and has therefore appeared in ever new editions and variations since its launch. Here we have put together some models for you: Other interesting series from Omega

On watchmaster.com you will find many Omega series and other certified, used luxury watches. If you want to buy a cheap Omega Speedmaster Moonwatch, you've come to the right place. It pays off to invest in luxury watches: the Omega Speedmaster Moonwatch prices can rise over time and vintage models in particular are often collector's items that gain value over time. In addition to the usual payment options via PayPal and credit card, we also offer you the payment in installments. So you can flexibly finance your Speedmaster Moonwatch. Any questions? Just inform yourself on our website or contact our customer service. We look forward to advise you!
What our customers say about us