Initially designed for the Italian Navy, the Panerai Luminor Marina completely changed the market. Almost overnight, a new trend was established – towards eye-catching, oversized watches. Today the diver's watch from Italy is a true icon with a perfect design.  More 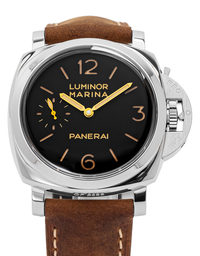 
A cheap Panerai watch is hard to find. But among the numerous certified, used luxury watches in the online shop of Watchmaster are always models of the Italian brand represented. These can then conveniently be purchased by credit card, PayPal or by bank transfer. Alternatively, Watchmaster offers you affordable financing options for your desired Panerai Luminor Marina model. In the order process, put together your own instalment plan, determine the duration and amount of the down payment yourself and expect your new luxury watch in just a few days!

The Panerai Luminor Marina in detail

The Panerai Luminor Marina is due to its water resistance of 30 bar pressure the diving watch of the collection. Its dial is strikingly simple, the Arabic numerals and watch hands themselves are coated with luminescence mass. In addition, the seconds can be read on a sub-dial at nine o'clock. Depending on the model, there is also a date window at three o'clock.

One feature that immediately catches the eye is the crown protection. A locking lever secures the crown and reliably prevents accidental adjustment or even damage. It represents a characteristic design element, which also contains a meaningful function. The case of the timepiece measures 44 mm in diameter and is 15 mm high. It is made of matte titanium or polished stainless steel 316L. The latter material is often used in the watch industry, it contains both chrome and nickel and is therefore resistant to corrosion and acid.

The heart of the series is either the P.5000 calibre, a completely from Officine Panerai-designed calibre with a power reserve of up to 192 hours (eight days), or the exclusive P.3001 manual winding movement. It based on the ETA 6497-2 and has been certified by the Contrôle Officiel Suisse des Chronomètres (COSC). It has a power reserve of 72 hours (or three days). The watch glass is made of anti-reflective sapphire crystal and is 3.5 mm thick. The screwed case back is also made of sapphire crystal. It is made from the synthetically produced mineral corundum. 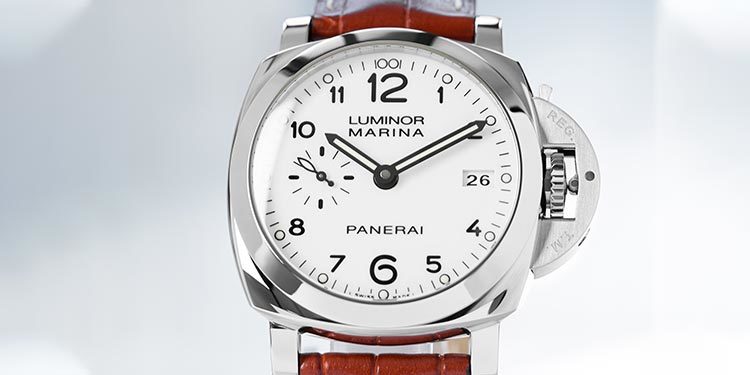 The current collection includes 15 model variants with different dials, case sizes from 40 to 47 millimetres and different bracelets. The most popular models of these are the following: 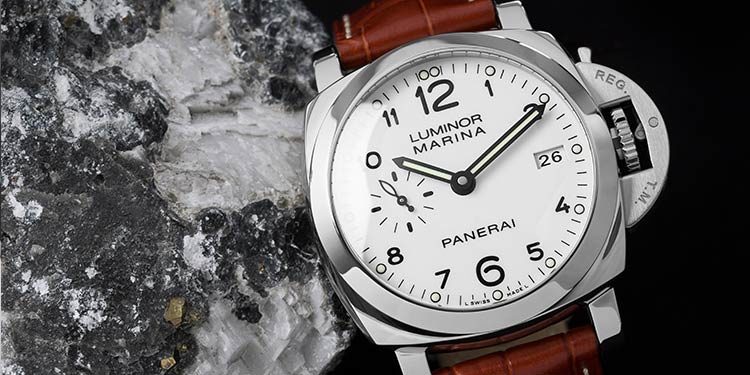 The outstanding career of a trendsetter

In the 1990s Panerai launched the Panerai Luminor Marina for the first time. Originally it was developed for the Italian Navy which was initially the only customer. The timepiece is very robust, almost martial – reduced to the essentials. High comfort and optimum use are always in the focus of the production. Almost overnight, the watch became a surprise hit which no one had expected.

Previously, the Panerai Luminor Base was launched on the market, this model also gained unexpected popularity. Nobody in the company itself nor in professional circles expected such a success, especially since Panerai was still quite unknown. In retrospect, both the Panerai Luminor Base and the Panerai Luminor Marina can diligently call it a pioneer for the ensuing wave of oversized watches. Because that's exactly what happened shortly after – the trend went to flashy, big timepieces. This development was owed to the launch of such a timepiece from the Italian manufactory.

A sturdy watch for strong arms

From Italy via Hollywood to the world


After economic difficulties in the early stages of the company's history, it was a solid man named Sylvester Stallone who set the foundation for the brand’s success. On a visit to Florence, he discovered a boutique of Panerai – and was mesmerized by the Luminor series models he found there. He bought several watches for himself, but also to give them to his friends. Among them, Arnold Schwarzenegger: He and Stallone wore the watches on their own during the filming of various films. Since the extremely masculine watch is highly recognisable and the two Hollywood giants have quite some fans, the company gained a place on the same level as other renowned luxury watch manufacturers virtually overnight. Other stars have also caught attention: in "San Andreas", the Panerai Luminor Submersible can be seen on the wrist of Dwayne Johnson. Brad Pitt and Pierce Brosnan both wear a Panerai Luminor Marina. And even Orlando Bloom, Adrien Brody, Robin Williams, Heidi Klum and Bill Clinton own a Luminor. The list of prominent owners seems endless.

* Terms and conditions apply
All prices include VAT. If differential taxation in accordance with §25a UStG is applicable the VAT will not be reported separately.
Watchmaster ICP GmbH | Charlottenstraße 60 | 10117 Berlin | Germany
© Watchmaster ICP GmbH
# 5ff64f38e