Started with restorations of high-quality timepieces, Parmigiani has become one of the most luxurious watch brands over time. The models are made of the most exclusive materials and are equipped with innovative technology.  More 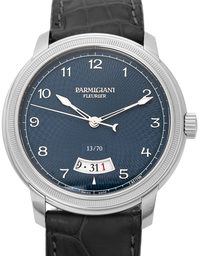 Buy Parmigiani - How to do it right

If you have opted for a Parmigiani watch, and are now looking for the right payment option, then Watchmaster offers many variants. For example, you can easily pay by PayPal, use a credit card, or do the transfer on classic way via banktransfer. For longer-term planning, however, financing by means of monthly installments is suitable. For this we offer you various options thanks to our financing partners. Please call our customer service and let us advise you individually. Before the sale, the watches are checked by our watchmakers and then provided with a certificate of authenticity, so we can assure you an absolute quality guarantee and offer you certified used Parmigiani watches at comparably low prices.

The Kalpa collection, with its elegant tonneau shape, is one of the brand's figureheads. The watch has a high recognition value, on the occasion of the 20th anniversary a model made of solid gold was produced.
The Tonda collection is one of the most extensive of Parmigiani. "Tonda" stands for the Italian word for "round" and reflects the classic of the series. Simple three-pointer models or complicated variations make up an exciting range. Various high-quality materials such as white gold and yellow gold are use. This series definitely has some diversification.
The Toric collection is a reminiscent of the first wristwatch that Parmigiani introduced in 1996. Michael Parmigiani himself drew the first sketches of the watch and even today the models are only available in red gold or white gold.
The Bugatti watch collection was developed in partnership characterized by traditional values. The quest for innovation, independence and unconditional excellence make the models a perfect symbiosis of the two luxury companies.

Invest in a Parmigiani

For a successful investment, some points are essential. A long history and tradition can play a major role, but more important is the exceptional quality and choice of materials. Parmigiani, with more than 40 years of history, is not one of the oldest but one of the most luxurious brands in the world of watches. The timepieces can be found in the top price segment and are extremely durable thanks to their filigree workmanship and exquisite choice of materials. Factors that suggest a lucrative investment.

Innovative Watchmaking - The History of Parmigiani

In 1976, the then 26-year-old Michel Parmigiani opened a restoration workshop in Couvet. He specialized in working with watch models of haute horlogerie. Just two years later, he began to create his own collections as part of his own label. For his innovations in the field of mechanical watches, he was awarded in 1995 with the Prix Gaïa. The Sandoz Family Foundation became aware of the watchmaker and decided to support him financially. This gave Parmigiani the opportunity to grow his business and launch new collections. The first series of the brand consisted of pocket watches, wrist watches and table clocks. In 1997, at the SIHH trade fair (Salon International de la Haute Horlogerie), Parmigiani finally established itself as an integral part of the world of luxury watches.
As early as 1998, the company presented its first own caliber. The manual wind movement PF 110 was able to convince with an autonomy of 8 days and spoke for the innovation and capability of the brand. Since 2000, all production units, which belong to the production of a wristwatch, have been gathered by the company under one roof. Thus a 100% production of own watches was made possible. Parmigiani never let her clientele wait long for new developments in the past. In 2001, the automatic caliber PF 331 was introduced, which was used in the Forma collection. The revision PF 333 appeared a year later with a retrograde perpetual calendar.
In collaboration with the luxury car brand Bugatti Parmigiani developed in 2004 a caliber, which is hard to beat in terms of innovation. The movement was modeled after an automobile engine and is the world's first in a transversal arrangement - two movements in a horizontal arrangement. It has only been installed in limited numbers, so the model Bugatti Type 370 is a true rarity of luxury watches. But because just one novelty in the year is not enough, the brand launched the PF 500th movement in the same year. This is the first with a 30-second tourbillon with center second and a power reserve of whopping seven days. The focus of Parmigiani has always been on ensuring quality and accuracy. Therefore, the company is also one of the founding members of the quality association FQF (Fondation Qualité Fleurier). This is an additional test to the COSC test for the certification of chronometers.

But apart from technical innovations, the company's choice of materials is also unique. The material palladium has long been a mystery to the watch manufacturers. It is harder than platinum, thus more scratch-resistant but lighter. Until now it was often used to alloy with gold to obtain white gold. The processing of pure palladium, however, proved to be extremely difficult since the optimum gloss was difficult to achieve. In 2005 Parmigiani managed to launch its first collection in this material.

The company was founded at a time when watchmaking was experiencing great difficulties. For many, this stretch of history is known as the “Quartz Crisis”. The founder Michel Parmigiani reports that every acquaintance advised him to pursue his dream of owning a watch manufacturer. Despite all the advice, he decided to open a factory and follow his dream. The success quickly gave him the necessary encouragement. The highest quality in technology and choice of materials and the always outstanding innovations, the company can now count into the top brands of luxurious watches in the world.
What our customers say about us
SELL YOUR WATCH
Looking for a Watch?
Join our newsletter
[[ newsletterCtrl.subscriptionMsg ]]