Initially developed for British fighter pilots, the Air King is one of the oldest series of the traditional brand. It shines with classic Rolex design and high functionality at a great price and is ideal as a beginner model.  More 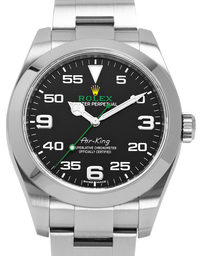 How to buy and finance Rolex Air-King watches online

The Rolex Air-King watches are among the lower priced models of the Rolex brand. If you have already decided on a certified pre-owned Air-King, new or vintage model, there are several purchase options for you: Either you pay the entire purchase amount at once by credit card or conveniently with a few clicks via PayPal or you decide on an installment payment. A financing allows you to choose the payment period yourself and can possibly be an interesting option. If you need help with your decision, please visit our website or contact our customer service.

One of Rolex' oldest series: the Rolex Oyster Perpetual Air-King

The Rolex Air-King is one of the oldest series of Rolex. It is regarded as an entry level model and convinces with a simple design at an affordable price point. Originally it had been developed as part of the Air series for british pilots during the Second World War, which they especially appreciated because of the 35mm, for that time, a large housing.
For a long time the Air-King remained unchanged. To this day, it has remained faithful to the original design from the 1950s, but has undergone several technical innovations and updates. For example, with the release of the current Rolex Oyster Perpetual Air-King 116900 watch at Baselworld 2016, the case diameter has grown to 40mm. Visually, their recognizable value remains unmistakable, even the "Air-King" lettering on the dial of the current collection takes over the original font of the 1950s. 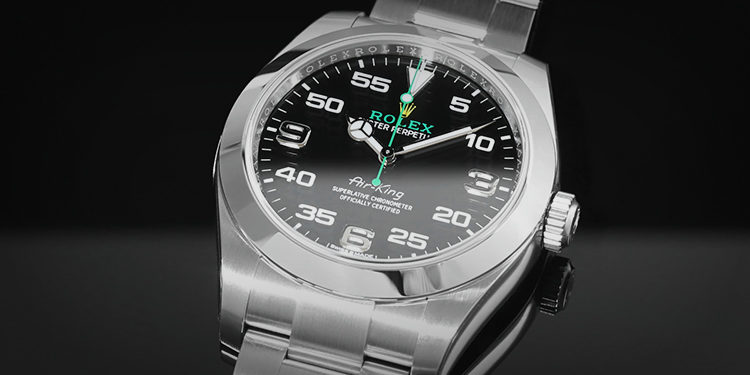 The Air-King series convinces with simplicity and high functionality. Pilots have always valued their clean design and the associated good readability. Still, the watch dispenses with unnecessary additions, but the design of its dial has become a bit more conspicuous. The ref. 116900 of the current collection has a distinctive second hand in the same green as the Rolex logo in the upper third. It comes with cambered bezel, on the dial are 3, 6 and 9 prominently in Arabic numerals, the other indices offer as a 5-step orientation for minutes and second hand. It comes with Oyster bracelet and Oyster clasp, which guarantees a perfect fit on each wrist. The automatic caliber 3131 guarantees a precise accuracy, it is certified as a chronometer of superlatives.

The story of the Rolex Air-King

The history of the Rolex Air-King actually begins in the 1930s, when British pilots frequently used Oyster Perpetual wrist watches because of their slightly larger body. Rolex responded to this observation and developed several watches especially for pilots, who were better readable because of a larger dial. In addition to the Air-Tiger, there was the Air-Giant, the Air-Lion and then the Air-King; only the latter was continued as a series. The first Rolex Air-King was introduced in 1945 with the Ref. 4925. Their classic simplicity was also well received outside the aviation circles and the Air-King quickly became one of Rolex's most iconic models. Nevertheless, they never lost touch with aviation: airlines such as the luxury airline Pan Am gave their pilots to retire, for example, Air-King watches to thank for their services.
For a long time, almost nothing has changed in the design of the series. In the 1960s, bi-color models made of stainless steel and yellow gold with a smooth and ribbed bezel were added. In 1992, two more stainless steel models with two bezel variants were released.
Production then stopped between 2014 and 2016 to be reintroduced in 2016 at Baselworld as a new designed model with the ref. 116900.