At first a shelf warmer, now a classic among the Rolex watches: The Rolex Daytona with tachymeter bezel is an ideal companion not only for racers. Paul Newman made them popular, now the Daytona is new, pre-owned and vintage highly sought after.  More 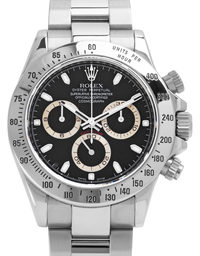 
Introduced in 1963 the Rolex Daytona took off like a rocket, after initial teething problems, to be the icon of the luxury watch industry and is now one of the most popular models of the brand. The company has been producing significantly fewer Cosmograph Daytona watches for years than they could have sold, which makes them extremely sought after by collectors. That's why even pre-owned Daytona watches are traded above selling price, which makes them a very safe investment.

Buying a certified pre-owned Rolex Daytona is easier than you may think! Take a look at our online shop to find the right model. Second-hand Daytona watches are even cheaper and at the same time – a good investment. Did you choose your favourite model? Besides an instalment payment there are plenty of options for you to pay – simply contact our customer service for more details. 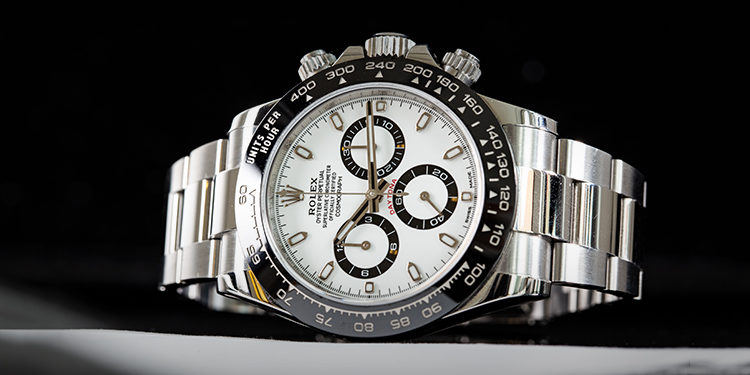 The Rolex Daytona: a reliable timepiece

Focusing primarily on the demands of racing drivers in the development of the Daytona, their most striking feature is their tachymeter bezel. Its chronograph function is activated by two pushers on the right side, which are bolted just like the crown and are therefore watertight. The chronograph movement is extremely reliable and reacts thanks to coordinated pushers without any loss of time. Visually striking are the three sub-dials, which are coloured in the variants of the current collection. They are also equipped with a self-winding calibre 4130, which guarantees optimum accuracy even in the event of shocks and temperature changes. The Daytona measures speeds of up to 400 units, kilometres per hour or miles.

The Daytona collection at a glance

The current Daytona collection includes various variants, which differ mainly by their exclusive materials. Rolex relies on the use of luxurious precious metals that give the watch its high-quality appearance. When buying a Daytona, it's also worth considering vintage models and special editions. But also used classic steel models of the Daytona are extremely popular and still have a great trend in price.

What is the price of a pre-owned Rolex Daytona watch? 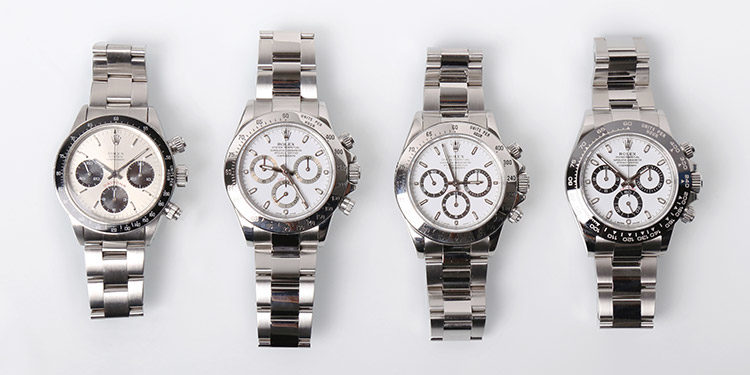 Discover more about the history of an icon

The Daytona is named after the city of Daytona Beach in Florida, where car races take place since 1903. As early as 1930, Rolex produced a chronograph specifically designed to meet the demands of racing. However, this was not yet the name Daytona, but was provided with the inscription "Chronograph" on the dial. Since other manufacturers in this category had established much earlier, Rolex landed with the Pre-Daytona, as it is called today, with no great success. The former storekeepers, however, are very popular today. As they went for only $200 at the time, they are today traded for around $20,000 or even more.

In 1962, Rolex became the official timepiece for race events at the Daytona International Speedway. Over the years, the races were drawn more and more from beach stretches to partially asphalted roads and have been carried out since 1959 on the fully asphalted Daytona racing track. Already in 1963 Rolex brought out the first Rolex Daytona with the reference 6239. At first, only the specimens intended for the American market had the red lettering "Daytona" on the dial until it later became common for all models.

Since the Daytona was designed specifically for use in racing, its bezel is wider and more legible than comparable models of competing manufacturers. It measures average speeds of up to 400 kilometres per hour and achieved prominence by famous wearers such as Paul Newman beyond racing. 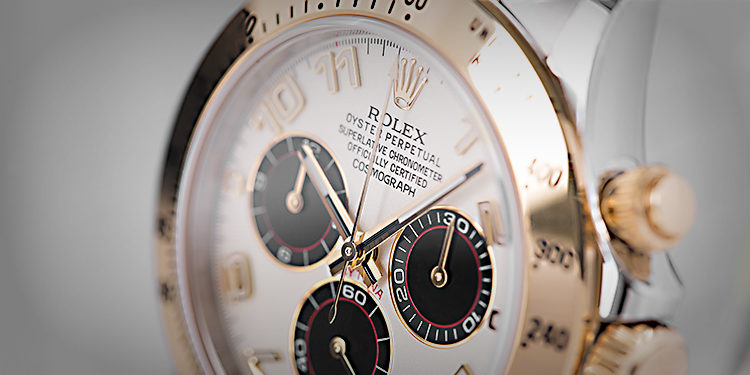 Famous wearers of the Daytona: The "Paul Newman Daytona"

One of the big names in Daytona racing is the Brit Malcolm Campbell, who broke the speed record nine times between 1924 and 1936. He wore both privately, as well as at races a predecessor model of the Daytona. The most famous wearer of the Daytona is the actor Paul Newman. Although he was never sponsored by Rolex, the model he was wearing was unofficially referred to as "Paul Newman Daytona". Newman wore an early version of the Daytona with the reference 6239 with the white exotic dial, of which only a small edition was produced and which today has a great collectors value.

Newman was also a race driver in addition to acting. Joanne Woodward, Newman's second wife, gave him a Daytona engraved with "Drive Carefully Me". In 2017, the original Newman Daytona was sold at an auction in New York for 17.75 million dollars which converts into 15.3 million euros – making the "Paul Newman Daytona" the most expensive watch in the world.


Other interesting collections from Rolex